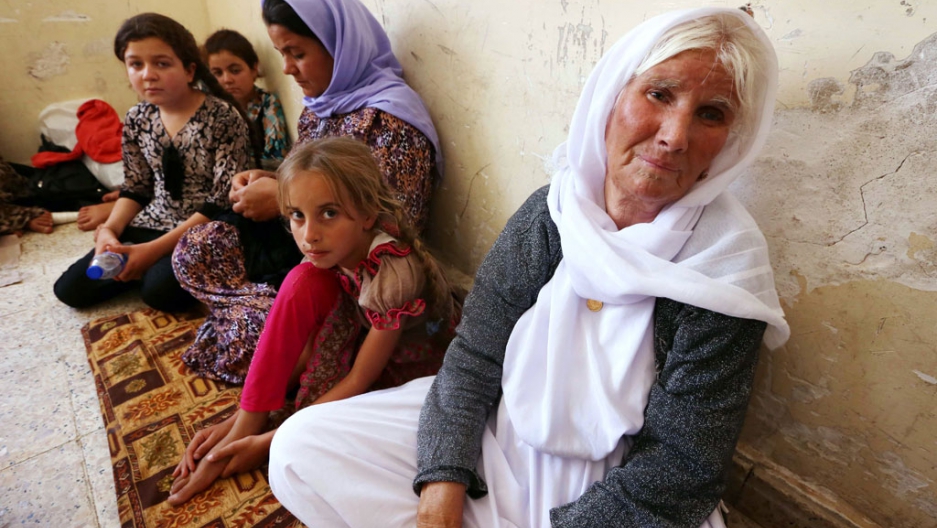 An Iraqi Yazidi family that fled the violence in the northern Iraqi town of Sinjar, sit at a school where they are taking shelter in the Kurdish city of Dohuk in Iraq's autonomous Kurdistan region, on Aug. 5, 2014.
Credit: SAFIN HAMED
Share

ERBIL, Iraq — The Nineveh plains of northern Iraq are home to a diverse mix of minority ethnic and religious groups. Their roots, their heritage, their homes and their most holy shrines are all right here in this brutal but beautiful land known as the cradle of civilization. But this week, three of these minorities, already persecuted for centuries, have come under the most severe threat to their existence in decades.

Last Sunday, the Islamic State began attacking villages of first Yazidis, then Shabaks, and finally Christians. As the militants continue to push forward toward the Kurdish capital Erbil, they have left in their wake hundreds of thousands of displaced families. Some say those they capture are being forced to convert or die. Others speak of mass executions and kidnappings of women and children. With the havoc wreaked in these areas and families left homeless and even starving, facts are hard to ascertain, but GlobalPost has been on the ground documenting the plight of families as they flee into uncertainty.

A distraught Yazidi woman from Sinjar stands in the grounds of the Lalish temple. “The IS attacked us by mortars and bombs,” she said. “When they entered the city they were covering their faces. They killed so many people. I saw the bodies. I saw so many people die.”

The first families begin to arrive to the holy Yazidi temple of Lalish on Sunday, as IS launched a sudden and unexpected offensive against the largely Yazidi town of Sinjar. Some fled to the homes of relatives and friends. Others took shelter in temples and schools. Some families packed whatever supplies they could manage, but others fled with nothing but the clothes they wore.

A group of men from displaced families meet with a Yazidi religious leader requesting shelter in the vast Lalish temple complex.

The temple spire shines in the daylight above the doorway of the Lalish temple. As IS — who have systematically destroyed graves and shrines, even of Muslims — push ever closer toward their most sacred structure, Yazidis fear it will be destroyed and their history will be wiped out permanently.

Men visit the underground tomb of Sheikh Adi ibn Musafir, the main figure of the Yazidi faith. The Lalish temple is a place of pilgrimage and worship and home to their religious leaders.

Oil vats are seen through a doorway at the Lalish temple. The oil is used to light 365 candles in the temple every day at sunset. The Yazidi religion is shrouded in mystery and a misunderstanding of their beliefs has led the false label of “devil worshipers,” resulting in mass persecution for centuries.

Men untie knots in colorful cloth at the Yazidi temple of Lalish. Adherents suffering from various problems visit this sanctum and tie a knot. It is believed that if someone else unties it, the problem will be solved.

A man screams during a Yazidi protest in Erbil on Monday. Unable to defeat the sudden onslaught from IS, Kurdish forces withdrew quickly from the city leaving at least 40,000 civilians to flee on foot to the Sinjar Mountains. Dozens died of dehydration and the elements. Yazidi protesters blame Kurdish forces for not protecting their city from IS.

A man breaks down during a Yazidi protest Thursday. Around 200,000 Yazidis have been displaced this week due to IS attacks. Dozens have been killed and hundreds remain unaccounted for. Yazidis number an estimated 600,000 and have suffered 72 massacres in the past due to religious persecution, largely at the hands of Muslim extremists. They say they are now experiencing the 73rd, and call on the international community for help and protection to save their culture.

Traffic piles up at a checkpoint on the outskirts of Kirkuk as families, largely from the Shabak minority group, flee IS attacks on their villages.

A woman tries to cool her infant in the hot midday sun. This family said they had been on the road for 2 days. With fears of IS infiltration and suicide attacks, and a lack of resources to cope with hundreds of thousands of displaced, Kurdish borders have tightened predominately along ethnic lines. While Kurds and Christians are generally allowed to enter the Kurdish capital Erbil, Arabs without residence in the Kurdish region are being turned away at checkpoints or redirected to remote IDP camps.

A family waits in a truck packed with their belongings at a Kirkuk checkpoint. Some families said the wait can be up to 10 or 12 hours at a single checkpoint.

Displaced families sit in the hot sun waiting to enter Kirkuk Thursday. While exact figures are sketchy, Shabaks are estimated to number up to 400,000 in Iraq, concentrated in the Nineveh plains around Mosul.

A security officer fires warning shots as desperate families attempt to drive around the congested checkpoint. While Shabaks follow a form of Islam, they have been heavily persecuted for centuries and were targeted along with the Kurds during Saddam Hussein’s ethnic cleansing campaigns of the late '80s.

Families pile into the back of a truck to escape IS advances. Some say they have spent days on the road trying to find a haven and shelter from this latest round of violence. There are unconfirmed reports of some executions carried out by IS against the Shabak minority. On Aug. 1, 35 Shabak civilians were kidnapped in Mosul. Their whereabouts are unknown.

Heam Marzana and her son Andy take shelter in a church in Erbil. The family was chased at gunpoint from their home in Baghdad in 2006. Her husband, Andy’s father, was killed. They are now displaced and homeless again and Andy is in desperate need of surgery from an injury he sustained in February. He was scheduled for surgery in Mosul when the current crisis began. They are now sleeping here on the grass praying for a miracle.

Thousands of Christians take shelter in the church grounds of St. John's church in Erbil. In an attack that began Wednesday, IS took control of Qaraqosh, the largest Christian town in Iraq, and the Christian areas that surround it, displacing around 100,000. Many of these families were recently forced to leave Mosul for areas around Qaraqosh with nothing but the clothes they wore. Now they have been displaced again along with their hosts.

This family from Mosul says they have lost everything. Tired of persecution, threats and frequent displacement, family after family repeated the words: “No more, Iraq! Enough is enough.”

A young girl waits in the church grounds as her family registers with church authorities. Inundated with displaced families, the priests announced by loudspeaker that there was little they could do to help so many. In a state of complete hopelessness, these families are now calling for asylum.

Nazar Hendi, severely crippled since birth, left Mosul last month on IS orders and said they confiscated all his belongings, even a cheap mobile phone that he treasured. They allowed his family to keep their car as Nazar fled without his wheelchair. Most Christian families were stripped of all their belongings as they left Mosul and walked out on foot.

Families search for shelter in the Christian district of Ankawa in Erbil. On Thursday, the streets were full of families — some sleeping in parks, on the roadside, or in their cars.

Nagam and her children stand at the front of the building site that has become their temporary home. Hundreds of thousands have been left stranded and homeless as IS continues to move forward. The Kurdish regional government is overwhelmed with the sudden influx, and calls for international intervention against IS have reached new heights.

All photographs by Tracey Shelton.

Correction: An earlier version of this article incorrectly stated that Yazidis stranded in the Sinjar Mountains had been freed.