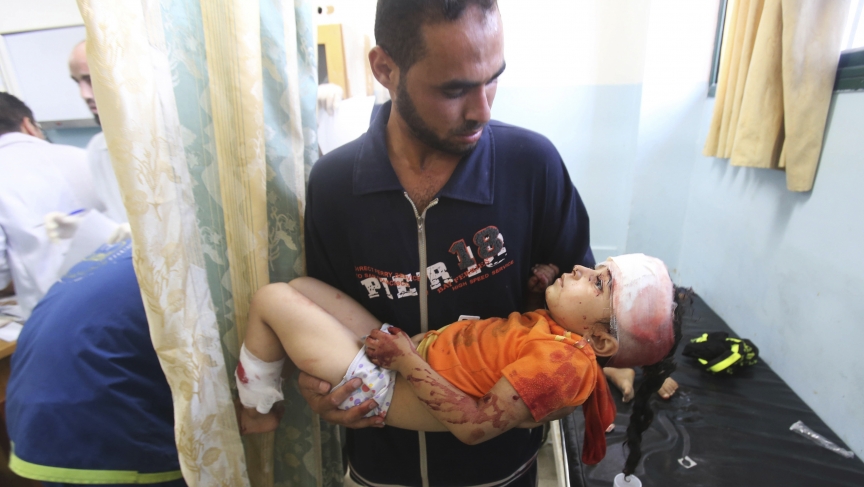 A man carries a Palestinian girl, whom medics said was wounded in an Israeli air strike, at a hospital in Khan Younis in the southern Gaza Strip, Friday.
Credit:

The war between Israel and Hamas is back on.

There had been hopes that a three-day ceasefire could be converted into a more permanent truce. But indirect talks in Cairo broke down, and a few hours before the ceasefire was due to expire, the Palestinians fired rockets into southern Israel.

Then — at 8 a.m. local time, when the ceasefire expired — the Palestinians fired a heavy barrage of rockets and mortar shells across the frontier. Later, Israel retaliated with airstrikes.

Reporter Daniel Estrin, in Jerusalem, says it's not what many Israelis were expecting.

“I think a lot of people really are quite surprised,” says Estrin. He says people aren’t naïve and they’ve seen plenty of previous cease-fires collapse in the month-long conflict. “But there really was a feeling here that this war was wrapped up.”

“There were commercials on Israeli radio saying now was the time to tour Israel, and support local tourism,” says Estrin. “Now, again, radio broadcasts are interrupted intermittently with anchors breaking in and announcing air raids.”

Estrin says he spoke with one woman today who had returned with her family to their home in a community near Gaza. She’s very frustrated, says Estrin. “Yesterday her kids were running around outside, and today everyone stayed indoors and bolted down to the basement every time there was an air raid siren.”

Estrin says that the woman’s husband was disappointed with the Israeli military response today, saying it was “too little, too late.” The woman wasn’t sure if she agreed, but Estrin says you do hear many voices of disappointment in Israel, saying “perhaps the army pulled out of Gaza too soon and didn’t finish the job.”

Estrin says there are similar sentiments in Gaza.

He says he spoke to a man in Gaza who told him that his family had just returned to their home, thinking the conflict was over. “And now he says they’re going to move out again tomorrow morning.”

Estrin quoted the man in Gaza as saying there are many people who say “Hamas fighters should not stop now, if they haven’t gotten their demands met. There are so many people in Gaza who have lost so much over this past month, that he says there’s a feeling of why not go for broke, so that they don’t have to go through another war in a few years time.”

Israel has not re-started ground operations, but Estrin says an Israeli official told him that all options remain on the table. However, says Estrin, “there really has been radio silence on the part of the Israeli leadership, about what’s the next step here.”