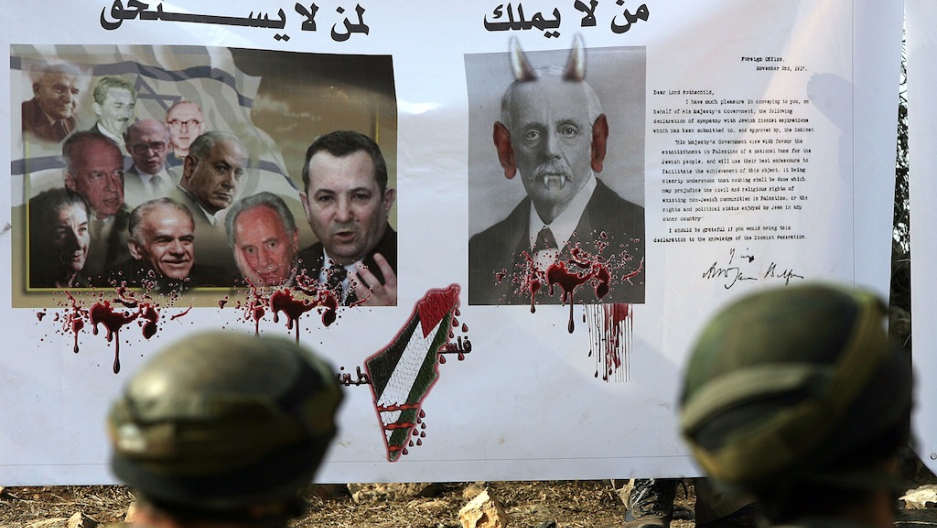 Israeli soldiers stand in front of a banner with a copy of a letter from the British Foreign Secretary Arthur James Balfour to Baron Rothschild (a leader of the British Jewish community) known as the Balfour Declaration of 1917, as Palestinians, Israeli and foreign protesters demonstrate near the Karmi Tsor Jewish settlement not far from the Palestinian village of Beit Omar in the Israeli-occupied West Bank on November 6, 2010.
Credit: Hazem Bader
Share

In October 1917, British forces finally drove the Ottoman army from Gaza, in recent weeks the site of Israeli-Palestinian fighting but then a dusty garrison town that had stubbornly held out against British attacks.

Gaza’s fall was a turning point in World War I, and Britain’s war-weary government seized upon it. Politicians in London saw an opportunity to turn the inevitable British entry into Jerusalem that followed three months later into a grand historical moment. The Balfour Declaration — which promised to establish a Jewish homeland in Palestine — is a direct result of that desire.

Throughout the war, Britain had tried to bolster support for its imperial holdings by cutting deals with religious and ethnic groups who had previously been treated as little better than vassals. In India, Burma, Nigeria and elsewhere, these decisions remain poignant to this day, primary because they stoked resentments between tribes and ethnicities who benefited from colonial arrangements and those who were left on the outside.

But nowhere did this tactic sow as much future enmity as in Palestine.

In 1915, Henry McMahon, Britain’s High Commissioner for Egypt, had already promised Hussein bin Ali, the Sharif of Mecca and leader of Arab Islam, that an Arab nation would exist after the war if the sharif led Arab tribes in revolt against the Ottoman Turks.

The borders of this future nation were left vague, but Sharif Ali clearly thought Jerusalem and Palestine were included. And so he agreed and the famous Arab Revolt, popularized in the film “Lawrence of Arabia,” began in April 1916.

From The GroundTruth Project: Past Forward: Scars of the Great War, A Timeline of World War I

But Britain also needed money for the war, having run up a huge debt with the US even before it joined the war and ultimately shifting permanently the financial balance of power in the world.

Britain courted Jewish financiers, and most importantly, Baron Walter Rothschild, the leading light of Britain’s Jewish community and quite possibly the wealthiest man in the world at the time. In exchange for Rothschild’s continued financial and political support, he extracted a promise from British Foreign Secretary Arthur Balfour to support the establishment of a Jewish homeland in Palestine when the war ended.

The precise wording of the Balfour Declaration, provided to Rothschild on Nov. 2, 1917 and published a week later, contains important caveats. But it certainly conflicted with the promises McMahon offered to Sharif Hussein:

His Majesty's government view with favour the establishment in Palestine of a national home for the Jewish people, and will use their best endeavours to facilitate the achievement of this object, it being clearly understood that nothing shall be done which may prejudice the civil and religious rights of existing non-Jewish communities in Palestine, or the rights and political status enjoyed by Jews in any other country.

In fact, it is clear that Britain had no intention of honoring either of these post-war assurances. Soon after McMahon managed to lure the Arabs into revolt against the Ottomans, and well before the Balfour promise to Rothschild, Britain and France signed a secret agreement to split the entire Middle East between them.

The secret Sykes-Picot Agreement left France with sway over North Africa, Lebanon and Syria, with the rest of the region — including Palestine — left in British hands.

The British-French betrayal was exposed by the nascent Soviet government after the tsar was overthrown and his archives fell into the hands of the Bolsheviks, who saw its propaganda value and published it in an effort to embarrass the imperialists it now opposed.

So pervasive was Sykes-Picot that earlier this year ISIS — the radical Islamic State in Iraq and Syria now holding sway over that border area — symbolically burned a copy of the treaty to emphasize its ambition to create a true pan-Arab caliphate.

In retrospect, this bit of Great War political theater by Britain looks either cynical or, at best, short-sighted. But in context, these tactical moves look more like fin de siecle imperial chaos than a carefully calibrated bait-and-switch. After three hard years of bloodshed, Britain’s government — indeed, its empire — was on the ropes financially, militarily and psychologically.

As the Balfour deal was struck in late 1917, the war outside the so-called “Egyptian front” remained severely bogged down. British forces were only just recovering from serious defeats suffered in Mesopotamia. An attempt to knock the Ottoman Turks out of the war at Gallipoli in 1915-16 failed ignominiously, with about a half million killed or wounded on each side.

Meanwhile, the Western Front in France and Belgium was a meat grinder, by now having claimed millions of lives in pursuit of very little in terms of tangible gain. And the Russian Revolution had knocked Moscow from the war, bringing the prospect of a redeployment of millions of German and Austrian troops from the Eastern Front to the trenches of the Somme and the Marne.

From London’s standpoint, striking a grand pose as its forces ended five centuries of Ottoman rule over the holiest city in Christendom was irresistible. When British forces entered the city in December 1917, Lloyd George, the prime minister, declared Jerusalem a “Christmas present for the British people.”

But, in fact, it would have far greater and grimmer consequences for the region’s Muslims and Jews, who both now laid claim to the same territory and who have been contesting it for nearly a century since.

Aaron David Miller, a Brookings scholar and former US Mideast negotiator, captured the duplicity of British policy best in the title of his 2008 book, “The Much Too Promised Land.”

But another scholar, Jonathan Schneer, captured its consequences more succinctly in 2012 in his own book, “The Balfour Declaration — The Origins of the Arab-Israeli Conflict.”

“During World War I … Britain and her allies slew the Ottoman dragon in the Middle East," he wrote. "By their policies they sowed dragon’s teeth, armed men rose up from the ground. They are rising still.”