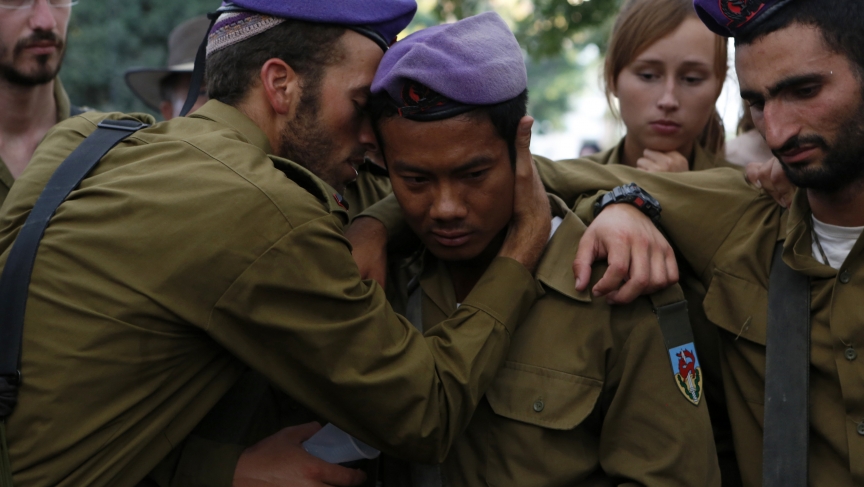 Israeli soldiers mourn during the funeral of their comrade Lt. Hadar Goldin in Kfar Saba, near Tel Aviv, on August 3, 2014. Goldin's death in Gaza is prompting some in Israel to question their military's controversial Hannibal Doctrine.
Credit:

The Israeli military’s cantor sang the mournful Jewish prayer for the dead at the funeral for Second Lt. Hadar Goldin his week. Last Friday, Palestinian militants ambushed Israeli troops near a tunnel, and dragged Goldin back into the tunnel with them. Israeli soldiers responded with a massive bombardment of the area.

“It was part of our attempts to cordon off the terrorists’ escape route, their potential escape route,” says army spokesman Lt. Col. Peter Lerner. “That's what we were doing.”

What they were doing was invoking the Hannibal Doctrine. Israeli military officials have sworn the name was randomly generated by a computer, but it carries a lot of symbolism. Hannibal was the ancient Carthaginian military commander who killed himself rather than risk being taken alive by his Roman enemys.

The Israeli military’s Hannibal Doctrine instructs soldiers to fire heavily if a comrade is taken captive by the enemy — even at the risk of killing the captive soldier.

In Israel, the ethos is: you don’t abandon your soldiers in the battlefield, says Daniel Nisman, a geopolitical consultant who served in the Israeli military.

“Everyone gives their sons and daughters to the military and they expect the military to return them,” Nisman says — even at the expense of returning them dead.

In 2006, Hamas militants captured an Israeli soldier, Gilad Shalit, on the Gaza border. By the time troops on the ground got permission from superiors to invoke the Hannibal Doctrine, the Hamas militants had taken Shalit deep into Gaza.

Five years later, Israel freed more than 1,000 Palestinian prisoners in exchange for his release. After Shalit, the Hannibal Doctrine was revised to allow the commanders on the ground to fire immediately without waiting for the OK, Nisman says.

“If this is a major strategic objective, they are not going to have time to let somebody in a house know, here’s an SMS, get out of there, because one of those people could be the kidnappers,” Nisman says. “I don’t see how any other military would have done differently.”

There are voices in Israel questioning the Hannibal Doctrine’s use that day, though. The left-leaning Haaretz daily ran an editorial calling for a “thorough and exhaustive investigation” into what happened to examine whether it involved “intolerable harm to an innocent civilian population.”

Breaking the Silence, an organization of former soldiers who criticize the army’s actions in the Palestinian territories, is beginning to solicit testimonies from soldiers who served in Gaza this past month to find out first-hand what happened on the battlefield.

“I think the point we can make is to make sure there is a moral discussion,” says Avner Gvaryahu, a 29-year-old member of the group. “The moral discussion has to be about value of life for soldiers of course, but also life of Palestinians.”

At Goldin’s funeral, a full-sized casket draped in an Israeli flag was lowered into the ground. But his body was never recovered; only blood-soaked parts of his uniform and some human tissue were found. The Israeli military says forensic evidence proves Goldin was killed in the initial Palestinian attack, not by Israeli troops firing back.

Shlomo Deutsch, one of thousands of Israelis who attended the funeral, says he supports the Hannibal Doctrine — even if it were to be directed at his own son, who also served in Gaza during this conflict.

“If something happened with my son, and Hamas picked him up ... better his friend kill him,” Deutsch says. “For the country it’s better. It’s impossible what they want [Israel] to pay.”