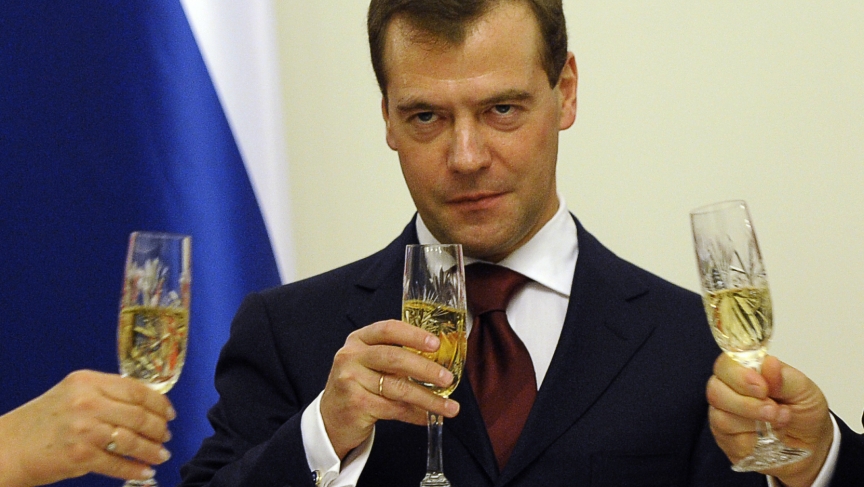 Then-President Dmitry Medvedev of Russia toasts with champagne during a state dinner in Warsaw in 2010.
Credit:

Russians might soon find themselves missing Scotch whisky and French cheese — but especially the whisky.

The decree, published on the Kremlin website on Wednesday, will last for a year. It bars imports of food and beverages from European Union countries and the United States in retaliation for attempts to punish Russia over its role in the Ukrainian conflict.

The exact list of banned goods is still in the works. But it quickly emerged that alcoholic beverages would be exempt. And the list will definitely include fruit, vegetables, meat products, cheese and dairy.

Still, Russian Internet users went ballistic at the news of the ban — at the mere thought, later disproven, of losing access to their booze..

Ivan Davydov was already waving goodbye to his favorite drink before the list was even published:

I guess I'll go and say goodbye to whisky today.

Even the usual jokes were filled with sadness, as Andrey Mima tweeted:

- Dad, vodka has become more expensive. Are you going to drink less? - No, son, you're going to eat less.

A few people tried to see the positive side of the ban, like Nadezhda Astel, who hopes to finally make that diet work:

The outpouring of feelings about the food and drink ban was mostly humorous, as users found increasingly elaborate ways to make fun of Putin's retaliatory tactics and their consequences. Denis Chuzhoy wondered what the ban would mean for Instagram's endless food pictures:

User “Wylsacom” suggested the lack of culinary choice might be good reason to take a short trip to a nearby country:

- Where were you over the weekend? - In Minsk [in Belarus], went for lunch.

At least blogger Roman Volobuev has the business solution well in hand:

Oh, and I came up with a media startup: I will buy all kinds of food here in Riga [in Latvia], eat it, and tell you what it tastes like.

For many users, the news immediately brought to mind memories of long lines in empty Soviet-era shops, which many of Russia's thirtysomethings experienced as children. Maxim magazine reimagined those lines with some modern hipster flair:

Coming this fall to Russian stores. (captions in image: “Is your Belorussian ribeye fresh?” “Have they put out any jamon?”)

But for all of the jokes, journalist Roman Dobrokhotov reminded Russians of the real stakes. He posted a black and white image of old food shortages before the ban was even announced:

Actually, the Kremlin has already banned foreign goods to spite the West, and this is what it looked like.

Dobrokhotov asked his readers on Facebook to share memories of Soviet “good old times," attracting many less-than-fond recollections of hardship.

Russian officials promise that the foreign goods ban will not impact local food prices and say the list will allow further changes. But the real question is: Should Russians really be saying their farewells to their favorite booze? And should they be stocking up on Snickers and Kinder Surprises?