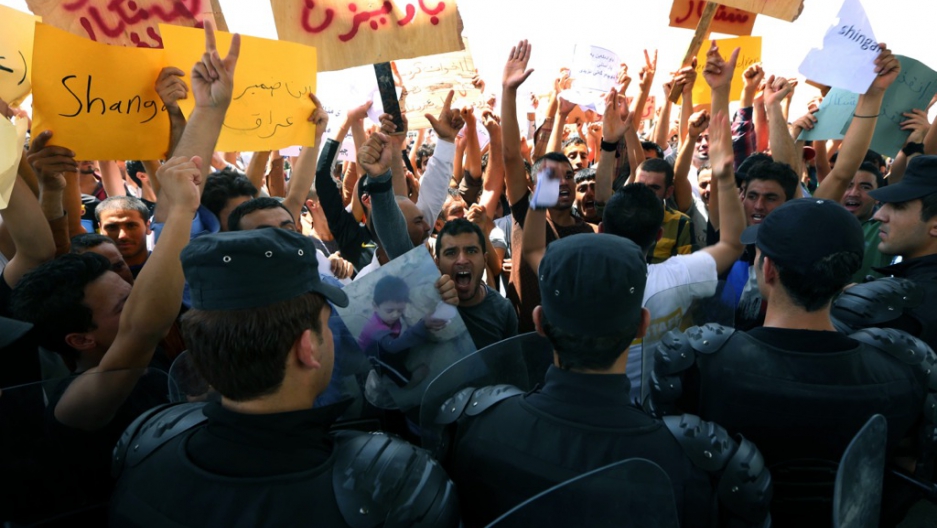 Iraqi Yazidis demonstrate outside the UN offices in the Kurdish capital of Erbil on Sunday. Media reports on Thursday cited Kurdish officials saying the United States had bombed Islamic State militants in northern Iraq whose advance had forced the Yazidis to flee their homes and towns.
Credit: Safin Hamed
Share

ERBIL, Iraq — President Barack Obama said in a statement to the nation on Thursday evening that he has authorized airstrikes in Iraq.

Obama said the US is also running a humanitarian operation in northern Iraq, at the request of the Iraqi government, to aid tens of thousands of Yazidis forced from their homes by Islamic State militants over the weekend and stranded atop a mountain range near Sinjar, short on food, water and supplies.

The president said the aid and possible strikes are intended to "prevent a potential act of genocide."

"When we face a situation like we do on that mountain ... then I believe the United States of America cannot turn a blind eye," he said.

The president said airstrikes against the militants may be necessary to ensure the safety of American personnel in Erbil, the Kurdish capital to which thousands of displaced Iraqis have fled in recent days.

Earlier Thursday, The New York Times reported that the US had already launched strikes against the IS militants who have taken control of much of northern Iraq, specifically in the towns of Gwer and Mahmour, close to Erbil. The Pentagon's spokesman, however, called reports of bombings "completely false."

Accounts by sources in Mosul have confirmed a US air presence — either drones or aircraft — in recent days over that city, which fell to Islamic State forces in June. Since those aircraft have appeared, the usual Iraqi government airstrikes and plane presence, pretty much a daily occurrence since the IS takeover, have ceased. However, sources speaking to GlobalPost on Thursday said they have not witnessed any strikes by the US.

Secretary of State John Kerry released a statement following Obama's remarks affirming the urgent need for US action against IS militants, also known by the acronym ISIL.

"ISIL’s campaign of terror against the innocent, including Yezedi and Christian minorities, and its grotesque and targeted acts of violence bear all the warning signs and hallmarks of genocide," the statement said. "For anyone who needed a wake-up call, this is it. ISIL is not fighting on behalf of Sunnis. ISIL is not fighting for a stronger Iraq. ISIL is fighting to divide and destroy Iraq."

Just a week ago, people were becoming comfortable with the idea that borders between IS and the Kurds were pretty much settled. Locals referred to this as a "gentlemen's agreement." The sides had their clashes, but not serious ones; negotiations over borders were resolved in short time.

People in the Kurdish-controlled areas had begun to believe IS only had eyes for Baghdad. But recent attacks on minority villages surrounding Mosul have taken everyone by surprise and sent shockwaves of panic through the Kurdish region.

In the past, IS has targeted areas with Sunni majorities that offer some local support. This past week, however, they have attacked predominantly Yazidi, Christian and Shabak towns and villages where they have no support base. While they have gained some minor oil fields, these areas have no significant natural resources compared to, say, Kirkuk.

An inside source told GlobalPost that IS has been planning a three-way attack on Baghdad but that the Kurds hold part of the area needed to launch the attack, which they've refused to yield. The push toward Erbil, the source said, is a way of pressuring the Kurds — to show that the militants are capable of taking what they want, if it isn't given.

The recent IS takeovers of minority towns ostensibly potected by Kurdish forces have seriously eroded trust in the authorities among both Kurds and minorities. A week ago, they believed the peshmerga would protect them. They felt safe. Now their safety is an open question.

Editor's note: This is a developing story. Please check back or follow us on Twitter for updates.

Tracey Shelton contributed to this report from Erbil, Iraq.