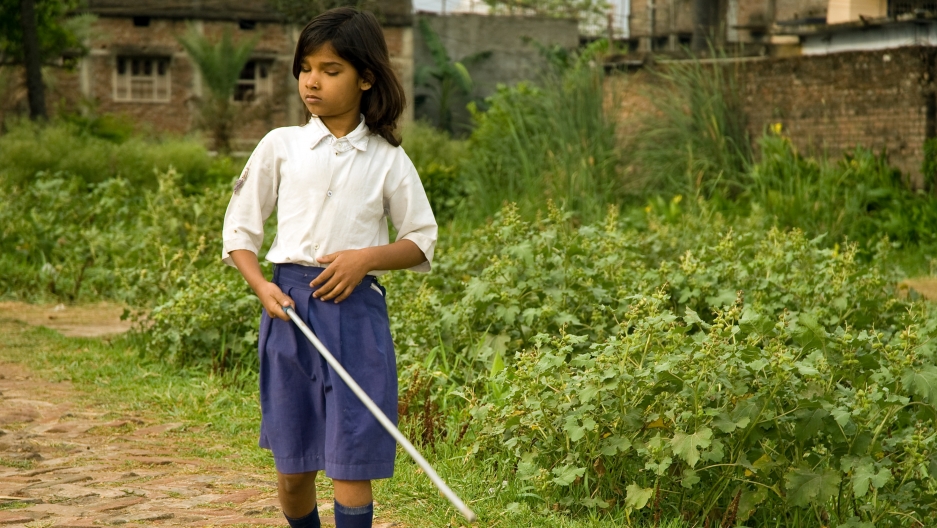 A girl named Kajal walks during mobility training at the Bihar Natraheen Parishad, or Bihar School for Blind Girls, in Patna, India, in 2009.
Credit:

Students at the Indian Institute of Technology in Delhi are making an impression with a new invention called the SmartCane. It enhances one of the world's oldest instruments — the walking stick — by adding sonar to help visually impaired people walk on their own.

That's a big concern in India, which is home to one out of every three people who are blind in the world — an estimated 15 million people, including two million children.

People who are visually impaired face no shortage of problems in India, where living with disabilities can be especially challenging. Pedestrians are often forced off of sidewalks that are cluttered with vendors, animals and other obstacles. And because of the difficulty of moving indepedently, accessing services is also difficult. For example, the Blind People's Association of India estimates that only about five percent of the country's blind children are registered for education.

Blind people typically use canes, of course, but the traditional cane can't detect objects higher than the waist. There have been other innovations like Roshni, an indoor navigation system that was also developed by students at IIT Delhi, but logistical issues make large-scale production impractical. That means inventing an affordable and simple tool to aid the visually impaired has been a priority for many researchers across the world.

Professor Meenakshi Balakrishnan, a computer engineer at IIT Delhi, led a team of researchers and students to develop SmartCane, which launched last March. The device emits ultrasound waves to detect nearby obstacles and vibrates to warn the user of anyting in its path. It copies submarines and animals like bats, which also emit sonar calls into their surroundings and guide themselves using echoes. The vibration ensures that the user is warned of obstacles; a sound alert may not be audible on noisy streets.

Brilliant lowcost "SmartCane" for visual #disabled comes out of @iitdelhi Great to see social #innovation like this. http://t.co/ccU794YXoH

There's already a similar British invention called the UltraCane, but that costs $985, a price that's inaccesible for most Indians. The SmartCane costs just 3,000 rupees — about $50. And according to SmartCane's Facebook page, the device is being provided to underprivileged visually impaired people in the state of Punjab for only 400 rupees — not even $7 — using subsidies aided by India's National Donation Pool.

The video below depicts a typical day in the life of a SmartCane user, portraying the various challenges blind people face:

SmartCane is currently available to users through a network of more than 16 welfare organizations for the blind across 12 Indian states. It has generated a positive reception from users, some of whom gave comments to The Better India magazine:

“It is a very useful device because earlier, with a regular cane, I quite often collided with vehicles like truck, tractor or bus. This was because my cane would pass beneath these big vehicles and I would collide abruptly. I have got injuries on my forehead due to such incidents. With this device I get a pre-warning of such dangerous obstacles through vibrations. This also helps me in detecting street animals such as a cow.” – Ketan from Ahmedabad

“It feels great to be able to move around alone. I no more take help from people to move around. I now enjoy being all by myself. Family and friends now have the confidence in me that I can travel independently without getting hurt or injured.” – Indrani from Mumbai

As the SmartCane's publicity grows, its user base will hopefully expand and put the ingenious new device in the hands of more and more people.