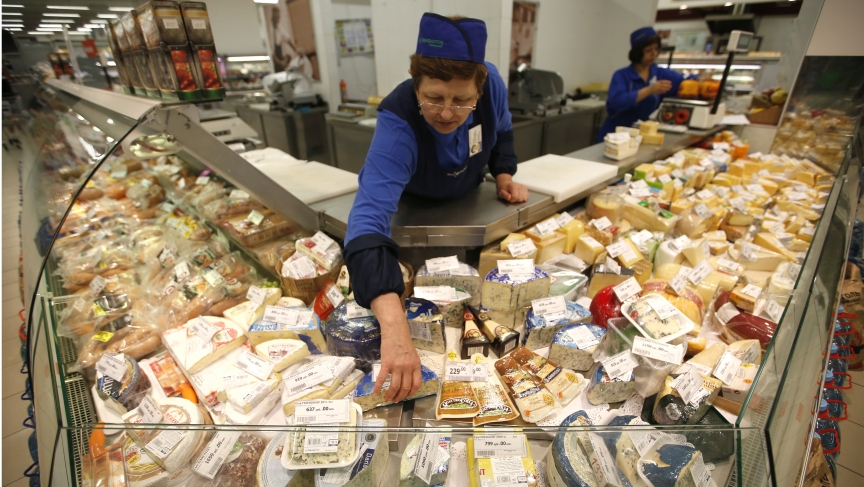 A worker arranges cheese for sale at a grocery store in Moscow on August 7, 2014. Moscow imposed a total ban on imports of many Western foods on Thursday in retaliation against sanctions over Ukraine.
Credit:

In Russia, gourmands are freaking out.

The Russian government has slapped a yearlong ban on food imports from the West. The measure covers meat, fish, fruit, vegetables and dairy products from the US, Canada, most of Western Europe and Australia. So what's the fuss over some fancy foreign foods?

Reporter and Moscow resident Charles Maynes sums it up nicely: "Have you ever had a really, really good piece of French brie?"

Maynes says the ban is both in retaliation for Western sanctions against Russia and a move to bump up domestic food production. But many Russians won't be happy about that. There's a perception that Russian goods aren't as good. "I think that's the idea that a lot of people have," Maynes says. "If they have the money they'll upgrade to the western goods often. But maybe they won't have a choice anymore."

The ban definitely harkens back to the Cold War, when foods and goods were hard to find. Maynes says it has a sort of "Back to the Future" quality about it.

But the big question is who the ban really hurts. Maynes says there is a sense the country is shooting itself in the foot. Recent polling that shows President Vladimir Putin's approval rating at an all-time high was taken before he took away the cheese.

So how will Russians react to the news? It's wait and see. Maynes says that many who Russians support Putin because he's made life stable. He has a deal of sorts with the people, especially the elites: He takes care of the country and they can take care of their lives.

Russians have traveled the world, enjoyed a consumer lifestyle and gotten what amounts to freedom. But now Maynes thinks the government is beginning to creep into the way people live. It's certainly been true for gays and lesbians, many of whom have had to flee the country for fear of persecution. Then came no cursing rules. And now we have a year without many types of food Russians enjoy.

Maynes says there were signs the Kremlin was softpedaling the announcement, perhaps in response to the public mood. One item the Russian government didn't ban was alcohol. Maynes thinks that was a strategic move from the Kremlin — many Russians took to social media to worry about future supplies of whiskies and cognacs.

The ban was also simply posted on the Kremlin website and given little or no coverage on television or the radio. "I think that shows how Russians might feel about it," he says. But Russians were still about to joke about it on social media:

Another item rhetorically asked what food items Russia would ban next. The answer? Russian goods.

Jokes asides, Maynes says there's one important quesion still waiting for an answer: "Will people ultimately say that this was a move the Kremlin had to make? Or will they say, 'Hey, this isn't the deal we had.'"