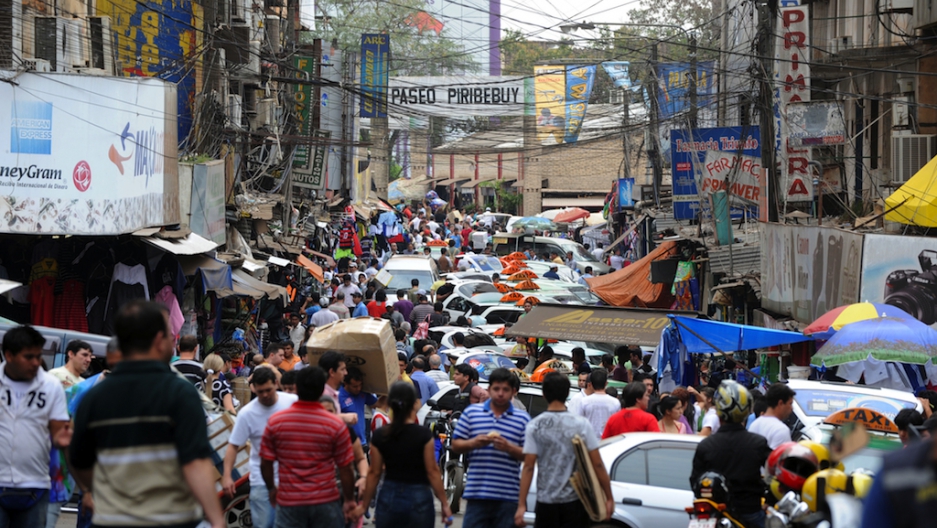 CIUDAD DEL ESTE, Paraguay — This is one bizarre place.

Eastern Paraguay’s Ciudad del Este, meaning “City of the East,” is the de-facto capital of the Tri-Border Area, where Paraguay, Argentina and Brazil meet.

But South Americans know it more as a sort of Wild West — a place where the rule of law matters little and where drugs, arms and counterfeit goods arrive by the ton.

Home to about 300,000 people, it’s also served as a refuge for anyone from drug traffickers to bootleggers and, as GlobalPost recently discovered, an alleged predator priest.

This place needs to be on everyone’s radar. Here are eight reasons why.

The piracy trade’s been bustling in Paraguay for decades. Last year, Paraguay was named one of 13 “notorious markets” worldwide engaged in counterfeiting and copyright piracy in a report by the Office of the United States Trade Representative, the agency that advises the president on trade policy.

The International Intellectual Property Alliance also highlighted Paraguay as a global scoundrel in the piracy trade. Software piracy alone in the country was estimated to be worth $73 million in 2012, according to the organization.

“Illicit unregulated financial activities make up an alarming part of Paraguay's economy,” Cooper wrote in an email. “The country and its people deserve better."

Pirated goods are everywhere in Ciudad del Este. From the ubiquitous DVD stands to cheap knock-offs of European soccer shirts, phonies with names like “Bolex” stare out from all corners.

2. ... which the Paraguayan government does little to nothing about ...

The White House’s trade representative made a scathing assessment of the South American country’s efforts to quell piracy.

“The situation in Ciudad del Este has not improved over the past year or even the past decade,” the representative’s 2013 report states.

The International Intellectual Property Alliance report goes into more detail. The Paraguayan government has comprehensively failed to tackle both the production of pirated goods within Paraguay, or woeful customs enforcement at the borders with Brazil and Argentina at Ciudad de Este, the alliance says. Immediate change is “sorely needed,” it concludes.

Paraguayan police displayed this weapons haul in Ciudad del Este in 2008 after a shootout with gang members believed to be involved in kidnapping a Japanese Unification Church pastor. (AFP/Getty Images)

3. ... and which helps to fund organized crime

The links between piracy and organized crime in Ciudad del Este have been known for decades.

A 2003 report by the Federal Research Division of the Library of Congress said the Tri-Border Area, or TBA, was an ideal location for organized crime.

“The TBA provides a haven that is geographically, socially, economically, and politically highly conducive for allowing organized crime and the corrupt officials who accept their bribes or payoffs,” the report reads.

As in much of Latin America, the piracy, counterfeiting and money laundering operations in Ciudad del Este are largely under the control of organized crime groups, the report states.

As such, it concludes, millions if not billions of dollars a year are funneled from the city to crime syndicates.

Paraguay is a major source of illegal narcotics for much of southern South America.

According to the UN Office on Drugs and Crime’s 2010 World Drug Report, Paraguay is the world’s second-largest marijuana producer after Mexico, and Ciudad del Este is a transportation hub for drugs entering and leaving South America.

Paraguay’s counternarcotics agency reported last year that drug seizures in the country were up by 39 percent. Still, the nation remains susceptible to serious corruption. Those busts only account for a small portion of the illegal drugs originating in, and passing through, Paraguay, according to the United States Embassy in Asuncion.

Ciudad del Este is a likely trafficking point, according to the US Embassy.

While the Paraguayan government has made some steps toward combating human trafficking, it’s still not even close to being in full compliance with global standards, the State Department says.

6. ... and even priests accused of molestation

As we’ve been reporting, Ciudad del Este even has problems within its churches.

In spite of numerous warnings, the city’s diocese offered a top post to Carlos Urrutigoity, a priest accused of molesting young seminarians in the United States. Last month, the Vatican ordered him removed.

But that’s not all. This sin city was also the last hideout for Aldo Omar Vara, an infamous former priest from Argentina who is accused of torturing prisoners during that country’s dictatorship.

7. It might be home to fundraisers for radical Islamic militants ...

Numerous reports over the years have said Ciudad del Este is a bastion for extremist Islamic groups such as Hezbollah.

A 2009 book published by the RAND Corporation, “Film Piracy, Organized Crime and Terrorism,” states that in 2004 a Ciudad del Este-based criminal, Assad Ahmad Barakat, was named by intelligence agencies as the key financier for Hezbollah in Latin America.

“The total value of the enterprise is difficult to estimate, but according to intelligence agencies, Barakat provided, and still provides, a large part of the $20 million sent annually from the TBA to finance Hezbollah,” the book states.

That $20 million would account for about one-fifth of Hezbollah’s annual budget.

Several media sources have built on the RAND book and other reports to paint Ciudad del Este as a terrorist hotbed.

But a May 2013 report by Al Jazeera heaped scorn on these accounts.

The Al Jazeera story accused other journalists of hysteria and of manufacturing links between Ciudad del Este and terrorism for the sake of headlines.

“A flourishing contraband industry does not indicate the presence of an Islamic terror den,” wrote Belen Fernandez, a columnist and author of books such as “Coffee with Hezbollah.”

“Nor does potential ideological or financial support among TBA residents for Hezbollah — selectively designated as a Foreign Terrorist Organization by virtue of its effective opposition to US-Israeli designs in the Middle East — suggest that the personal security of US citizens is at risk.”