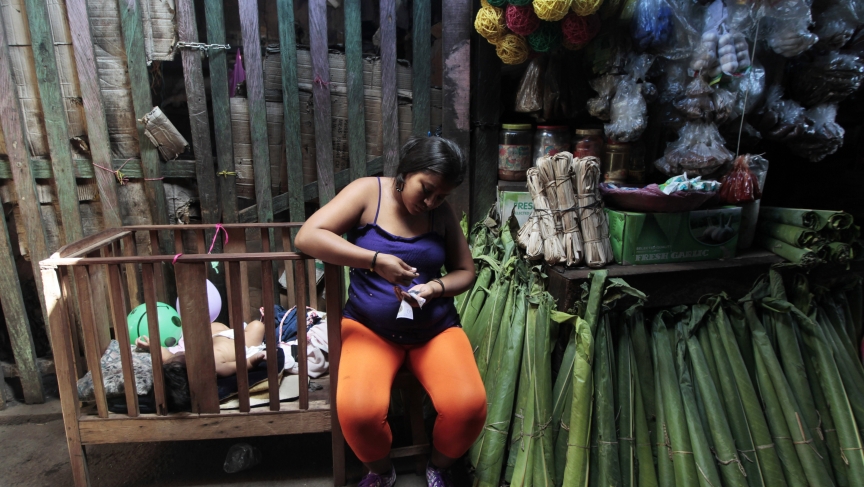 A woman sells banana leaves at a market in Managua, Nicaragua.
Credit:

Caldera arrived in the US when she was just a girl. When she can, she visits her extended family who still live in Nicaragua. “Where I’m from, there’s not that much crime because I’m from the provinces," Caldera says. "I’m not from the capital, so we still live very old-fashion.”

Unlike its neighbors, Nicaragua has a relatively low crime rate. Compared to Honduras, a country that's widely considered the most violent in the world, the homicide rate in Nicaragua is eight times lower: 11.3 murders per 100,000 people rather than 90.4 per 100,000. In the US, the rate is 4.8.

Tens of thousands of unccompanied children from Central America have recently fled across Mexico to the United States, overwhelming the immigration system. But while there were plenty from countries like El Salvador and Guatemala, few Nicaraguan children joined them. Everard Meade, the director of the Trans-Border Institute at the University of San Diego, says the lower rate of violence is a big reason not many made the dangerous journey. “I think a lot of that is just that they’re not facing the kind of social violence,” Meade said. “I think it’s that simple.”

It's also partly because of the region's history. The migrant experience has simply been different for Nicaraguans than for other Central Americans.

In the 1980s, civil wars ravaged El Salvador, Guatemala and Nicaragua, and refugees flocked to the US from all three countries. But in the case of Nicaragua, the United States government backed the rebels fighting against the socialist Sandinista government — and welcomed in dissidents. It's similar to how the US still treats Cubans. 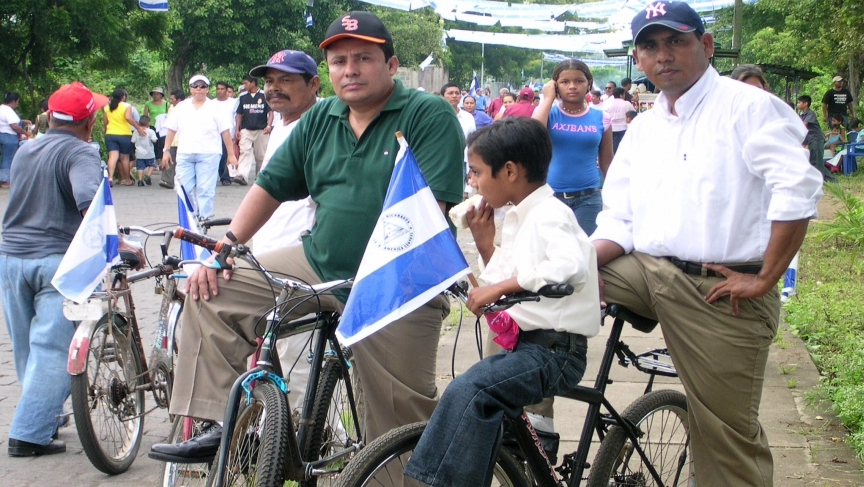 Nicaraguans at a political march in the capital Managua on August 28, 2005.
Credit:

“There were special provisions in the law made for Nicaraguans because they were fleeing an enemy of the United States,” Meade says. By contrast, the US supported the governments of El Salvador, Guatemala and Honduras, so seeking asylum was harder for people fleeing those countries.

Today, more Nicaraguans have become permanent residents and US citizens than other Central Americans. They are less likely to be deported and more easily able to bring family members legally into the US. “They didn’t suffer this sort of cycle of deportation and return that Guatemalans and Salvadorans did,” Meade says.

In the past two decades, the US has deported tens of thousands of Salvadorans, Guatemalans and Hondurans. Families have been divided, and some immigrants who made gang affiliations in the US took those criminal histories back with them to Central America. That's helped transform those gangs into transnational criminal groups

The lack of cyclical migration means gangs like this have not taken root in Nicaragua. But observers also give credit to Nicaragua’s generally upstanding police force and its focus on crime prevention. Both of those positives date back to the Sandinista revolution. “The police have really been very active for a long time in identifying who these kids are who are at risk or involved in neighborhood gangs and approaching them, making an effort to integrate these kids back into society,” says Tim Rogers, editor of The Nicaragua Dispatch, an online news site. It's a very different approach than the heavy-handed gang crackdowns that the governments of El Salvador, Guatemala and Honduras have tried in recent years.

In San Francisco, a travel agency in the heavily Latino Mission District helps Nicaraguan immigrants plan visits back home. Edwin Huete said he goes back every year. “I go to Granada, I go to Masaya, I go to Esteli,” he says, referencing cities in Nicaragua.

Huete fled to the United States 25 years ago after the Sandinista government threw him in jail for joining the US-backed Contra rebels. Now the Sandinistas are back in power. And while Huete thinks that government surveillance of Nicaraguans is excessive, he admits that the country is much safer today than its neighbors.

“Between Nicaragua and El Salvador and Honduras, Guatemala, I prefer to live in Nicaragua,” Huete says.

To be sure, Nicaragua is not immune to people leaving the country. But most who do are fleeing poverty, not violence. And Rogers, the journalist, said they have a land of opportunity that is much closer than the US: Costa Rica. It's much easier to reach, and many Nicaraguans already have family members there, too.

In San Francisco, Maria Caldera says she's happy to see her kids maintain a cultural connection to Nicaragua, not only through dance but also relationships with relatives who still live there. Caldera says that when she talks with her uncles and cousins in Nicaragua, they have no plans to leave. They may be poor and lack indoor bathrooms, but they're happy to stay where they are.