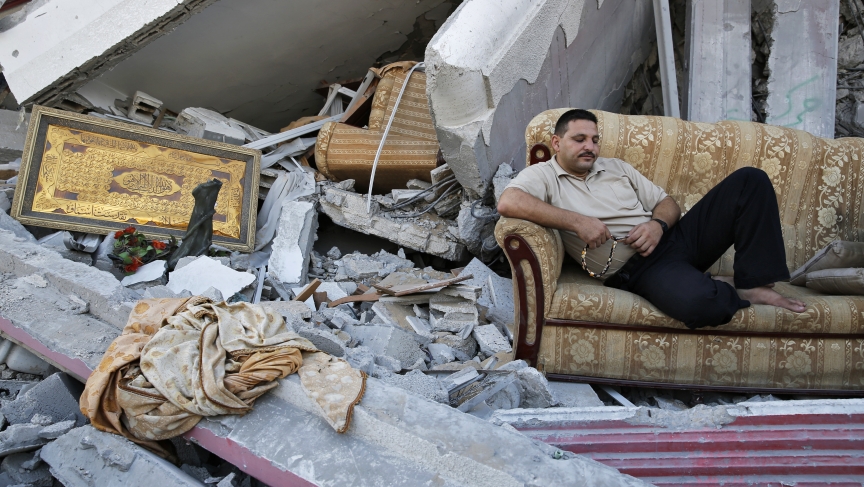 A man sits amid the ruins of destroyed homes in the Gaza Strip. Reconstruction cannot really start till Israel opens the frontier for cement and other building materials.
Credit:

Some are describing the conflict that just ended in Gaza as "the Tunnel War." The sequel might be "the battle for cement."

The Israeli goal in the Tunnel War was purportedly to destroy the massive network of ‘invasion’ tunnels built by the Palestinian militant group, Hamas. The tunnels allowed the militants to move under the border and launch raids into Israel proper. The ability of the militants to re-build those tunnels could now be a critical factor in negotiating a lasting truce.

Israel will want to prevent Hamas from re-building the tunnels. One way to do that is to control the flow of building materials, such as cement, gravel and re-bar, into the Gaza Strip.

But those same building materials are essential for civilian reconstruction as well. At least 10,000 buildings were damaged or destroyed in the month of fighting that ended Monday.

Hence, the battle for cement.

“That’s why getting this cease-fire is so much more difficult than cease-fires in the past,” says Rob Blecher, acting director of the Middle East and North Africa Program at the thinktank, the International Crisis Group.

Israel has imposed differing degrees of blockade on Gaza since Hamas seized power there in 2006, according to Blecher.

“For a time, they allowed no building materials into Gaza,” says Blecher. At other times, it was allowed in only under UN auspices. But at other times, Israel was powerless to stop cement coming in, especially when Egypt had a pro-Hamas government.

Israel’s ability to impose a blockade on building materials became a lot easier after the change of government in Egypt last year, according Blecher. Under the presidency of Mohammed Morsi, Egypt turned a blind eye to supplies being smuggled into Gaza. Like Hamas, Morsi’s political roots were in the Muslim Brotherhood. When Morsi was ousted in a violent military coup last year, the new government cracked down hard on the brotherhood, and on Hamas. It sealed the border with troops and blew up many of the militants’ smuggling tunnels. The Egyptian blockade continues, and Cairo tacitly supported Israel’s recent military campaign.

Blecher says the population in Gaza needs three things “that are really crucial to creating a semblance of normality. One is building materials including cement, then there’s fuel and electricity.” And there are grave problems with all of them.

“Unless those three things are normalized ... I think the cease-fire is going to last for less time rather than more time.”