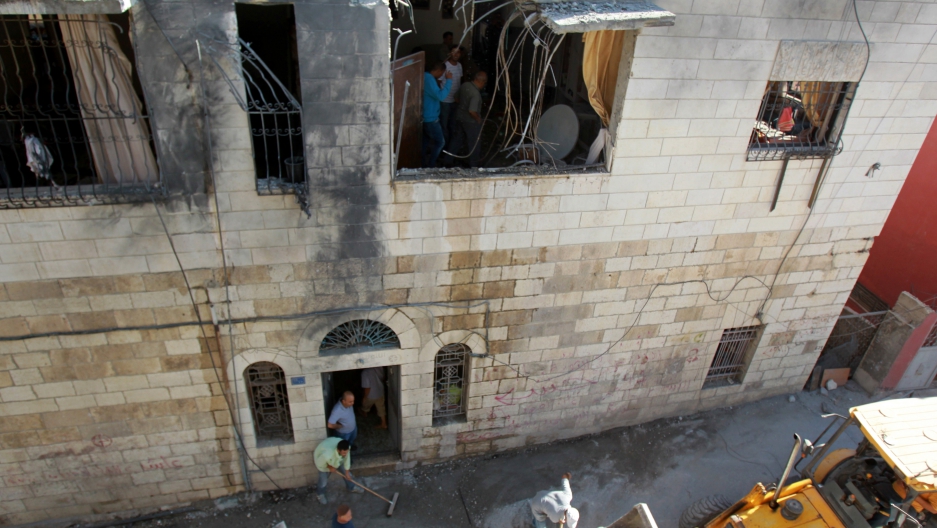 Palestinians inspect a damaged building in the West Bank town of Beit Sahur, near Bethlehem, after it was hit by mistake by a rocket fired by Palestinian militants from the Gaza Strip.
Credit: Musa al Shaer
Share

BEIT SAHOUR, West Bank — It is summer vacation, and Suheir Jubran, a youthful mother of six, was asleep this morning at two minutes to eight when a "sarrouhk" came crashing into her living room.

Sarrouhk, with its soft "s," rolling "r," and long "oo" that melts into a windy "kh," means rocket or missile in Arabic.

On Tuesday, all the children of Jubran's town, Beit Sahour, which is nestled on pretty hills just east of Bethlehem, were chasing each other on the streets, pointing their fingers on outstretched arms at any building in sight and yelling, "Sarroukh! Sarroukh!"

Suheir's own children, all alive and well and unusually disciplined, were sweeping up the fine white dust that had spread like sand throughout the home and were eager to show visitors the gash slicing through their refrigerator, which still works, and all the shattered windowpanes.

The story could easily have had a less gleeful ending.

The 72-hour ceasefire between Israel and Hamas, ending, at least temporarily, an intense 29-day battle, came into effect at 8 a.m. on Tuesday. In the last ten minutes of legal fighting, Hamas launched a barrage of some 20 long-range rockets into major Israeli cities, including Jerusalem.

One of those rockets went off-course, and ended up smashing into the Jubrans' living room.

Jamal Jubran, 44, Suheir's husband, was enjoying a quiet breakfast on his own when the window glass blew in on him. There are some new scabs on his shiny pate.

The Jubrans live in a two-family structure, with Jamal's brother, his wife and seven children living in the adjoining unit. A 10-year-old nephew, Mustafa, was badly cut on his shin, requiring 15 stitches.

Issam Yunis, in Beit Sahour on his annual visit from Chicago, was at his place, two miles away, "in the bathroom, when I heard a huge explosion. Massive."

Townspeople streamed to the Jurans' wrecked home throughout the day, pointing at the huge chunk missing where the living room used to be, assessing massive dents in the stone walls across the street, and commiserating with Jamal over his car, which also got blown away.

Although his home was bombed by Hamas, not Israel, the experience of being bombed also increases his sympathy for what his fellow Palestinians are going through with the Israeli airstrikes.

"All this destruction from just one single bomb," Jamal says. "Imagine what they are going through in Gaza. God help us. "

Asked for his feelings about local leadership — Hamas, the Palestinian Authority and Israel's government — Jamal, who owns a plant nursery, just laughed. "I have nothing to say about any of them, nothing at all," he said, still chuckling.

"Inshalah, they will succeed to finish this war," he said, referring to the ceasefire, which had held for the length of the day. "Inshallah, they will bring peace.”

In the rest of town, Beit Sahouris were rather less sanguine than Jubran. John Abu Sada, 15, a rising sophomore who sat with a group of other boys on a low stone stoop, said the ceasefire was definitely "not good."

"It's because the war is on every day between Israel and Palestine, if you call it peace or not peace."

Hamas, he said, is good because "they are not afraid of Israel. The Palestinian Authority is ok, but it's not enough for Palestinians. They're not like Hamas; Hamas is the resistance," he said, using the Arabic term "muqawama," which is what gives Hamas the middle letter of its name.

Loai Musleh, 18, another one of the boys, gently demurred, saying, "I think the ceasefire is good for us, maybe."

"They hate us," Abu Sada said of Israelis, who live 15 minutes away from Beit Sahour — and whom, due to the strictures and restrictions of the Israeli occupation of the West Bank, he has never met.

In a briefing with journalists late Tuesday, a senior military source said he thought the end of the conflict (if the ceasefire does, in fact, bring it to a permanent quiet) was "showing the start of people thinking that a better life is not something Hamas can deliver."

"After blaming Israel and the rest of the world," said the source, who according to military-briefing custom could not be identified, Gazans "will ask themselves who made this damage, and they will understand that Hamas is the one that refused all the ceasefire initiatives until today. They would probably understand that Hamas had something to do with that."

If that is the case, there was no evidence of it in Beit Sahour, which, like the West Bank in general, is considered much less politically radical than Gaza.

Mohammad al-Kassas, 44, working his job at a rotisserie chicken joint, said the ceasefire symbolized "the start of the end. Not of Israel. Not of the 'West Bank.' Of all Israel, whose real name is occupation." Al-Kassas is a resident of the nearby Deheisheh refugee camp.

Hamas' raison d'etre, he said, "is to stand up to the occupation."

Yes, he said, "Hamas represents the only resistance of the Palestinian people, it's true."

"This is the Holy Land, and there will never be peace here. Ever."