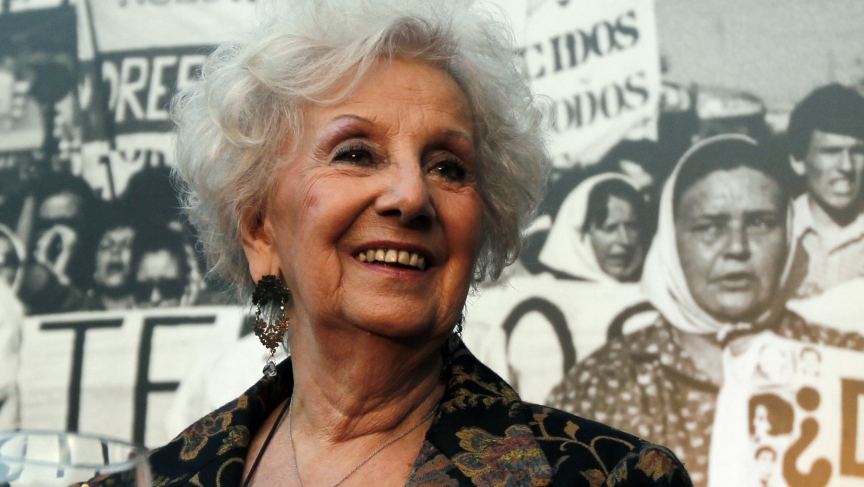 The year was 1978. Jimmy Carter was president of the United States. That summer, two popes died in quick succession — and John Paul II became pontiff.

Argentina beat The Netherlands 3-1 to win the FIFA World Cup at home in Argentina. Also in Argentina, the Dirty War was taking place.

That same year, a boy was born in Argentina. His mother gave birth in captivity — after being abducted by Argentina's military for opposing the ruling junta.

She was shot dead two months later. And her newborn son was secretly given up for adoption. There were hundreds of cases like that.

But that boy, now a man of 36, has been reunited with his grandmother.

“His name until now was Ignacio and he’s a musician, he was raised by family of peasants in a very small town near Buenos Aires and all of a sudden he discovered that he was the grandson of one of the most famous people in Argentina,” said Ignacio de los Reyes who has been reporting on the story for BBC Mundo.

That famous woman is Estela de Carlotto. A long time human rights activist, she has been searching for her grandson, whom she named “Guido,” since her daughter, Guido’s mother, Laura Carlotto, was killed by the military in 1977.  De Carlotto celebrated the news yesterday surrounded by her 13 other grandchildren.

"Now I have my 14 grandchildren with me," she said. "The empty chair is now going to be taken by him. The empty picture frames that were waiting to be filled are now going to have his image."

De Carlotto is a symbol of the search for the missing in Argentina. Since 1977 she and hundreds of other grandmothers of these stolen infants have been working to find them.

They're called the Grandmothers of the Plaza de Mayo.

For years during Argentina’s military dictatorship, thousands of leftist activists were rounded up by the military and “disappeared.” Many activists were pregnant when they were detained and gave birth during detention. Those babies were taken and put up for adoption.

“Laura, who was Estela de Carlotto’s daughter, gave birth at a detention center and only five hours after she gave birth to her baby Guido was taken away,” said De los Reyes.

De Carlotto’s grandson is the 114th stolen child to be found.  The Grandmothers of the Plaza de Mayo say that there are hundreds more children who haven’t been found. However, an exact number of the missing is difficult to come by, because there are no definite numbers on how many people disappeared during those years.

“There are some estimates that nearly 30,000 people were killed, but because this was a very brutal regime. One of the plans was also to get rid of the bodies so that the families would never know the truth of the fate of these left wing activists,” De los Reyes said.

De Carlotto has not met her grandson yet. According to De los Reyes, she is sensitive to the shock he may be experiencing as she has watched numerous other children of the disappeared grapple with their new identities.

“So this is a very, very sensitive issue in Argentina that has marked a whole generation and even some of the grandchildren that have regained their real identity, they thought they had a family and then they realized they had two and sometimes they had to choose,” De los Reyes explained.