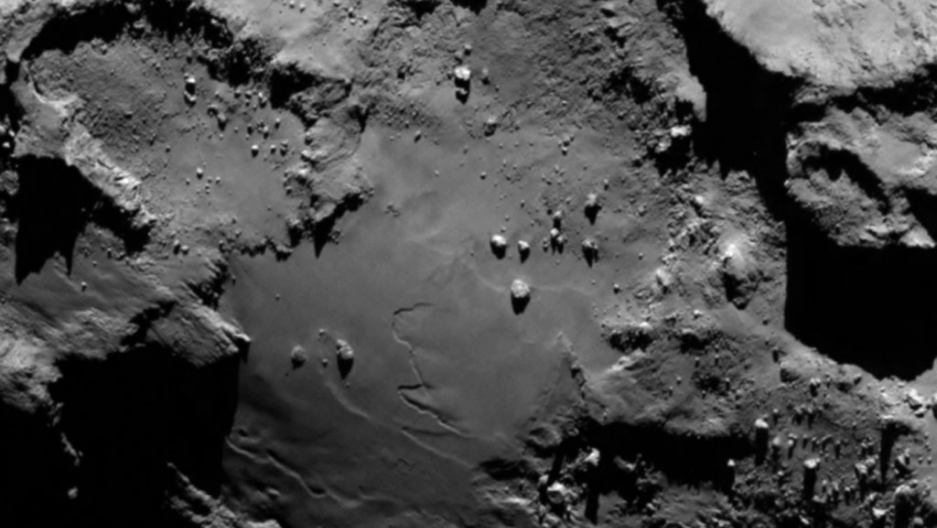 Cue the drumroll, space enthusiasts, because this is a big deal.

After a chase that lasted 10 years and covered billions of space miles, a European Space Agency spacecraft named Rosetta became the first to orbit a comet early Wednesday, and the images it's sent back so far are stunning (if you are into this sort of thing. And you should be.)

Here's another photo, taken just 60 miles from the giant ball of ice and dust that's traveling an estimated 34,000 miles per hour:

And another crazy image taken from a bit further away on Aug. 2, doing what comets do, burning off ice and water and stuff:

Rosetta is now trying to follow the comet known as 67P/Churyumov–Gerasimenko (or "Chury" for short) as it hurtles toward the sun. It rendevouzed with Chury early Wednesday somewhere before the orbits of Mars and Jupiter, and the ESA hopes to actually land on the comet sometime in November. That would be another — very important — first. But more on that in a bit.

First, here's why even orbiting a comet is a huge deal.

Comets are made from the same stuff the solar system was originally made from, and some scientists have even suggested that the water we have here on Earth came from comets. So if scientists can get a better understanding of comets, they can learn a whole lot more about how stars and planets form, and maybe even the universe as a whole.

There's also a real, albeit very slim, chance that a comet could one day hit Earth (think "Deep Impact" and those other comet apocolypse movies from the late 90s). To say that would be a global catastrophe is a huge understatement, and understanding more about comets could help keep that from happening.

Attempts to orbit and/or land on comets have failed in the past. NASA gave it a try with its Deep Impact spacecraft launched nine years ago. And while it did fire a projectile into a comet to study the material it created, the probe was declared dead in September 2013 and the mission aborted.

NASA did manage to land on an asteroid in 2001, but that's a lot less of a crazy feat than a comet. Comets are much more volatile places, not only because they travel faster but because they release dust and gas that can damage a spacecraft.

“Arriving at (Rosetta) is really only just the beginning of an even bigger adventure, with greater challenges still to come as we learn how to operate in this unchartered environment, start to orbit and, eventually, land,” Sylvain Lodiot, ESA’s Rosetta spacecraft operations manager, was quoted as saying.

Here's video of Rosetta's arrival and orbit from early Wednesday: