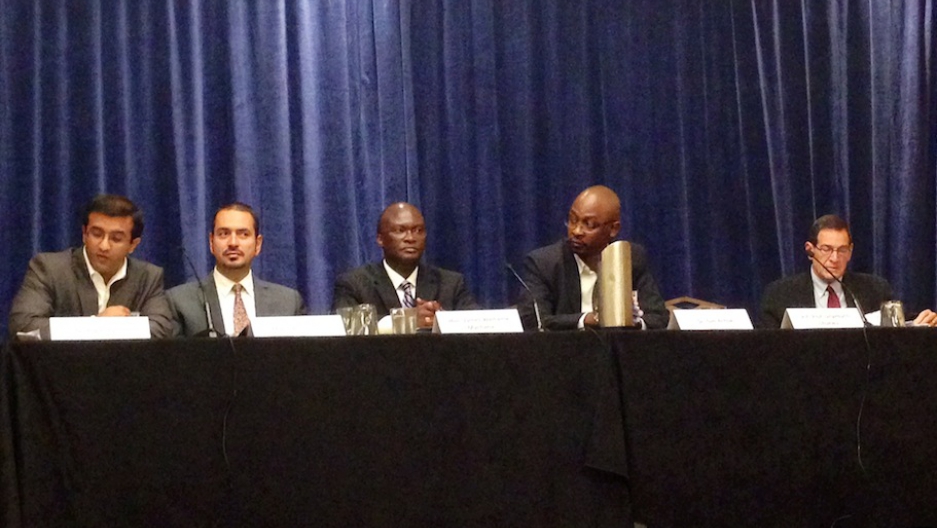 From left: Dr. Raj Panjabi, associate physician at Harvard Medical School moderates a panel on Monday, August 4, 2014, on non-communicable diseases as part of an ongoing conference in Washington DC on US-Africa investment. The panel brought together government officers and private investors from US and Africa.
Credit: Indrani Basu
Share

WASHINGTON — Facing inadequate health care resources in their home country, each year more than 7,000 Kenyans seek treatment for non-communicable diseases (NCDs) like cancer and cardiovascular disease outside their nation’s borders in European and Asian countries.

“Some of them die on the way to these countries,” said James Macharia, Kenya’s Cabinet Secretary for Health, before a crowd of government officers and entrepreneurs from US and Africa in Washington on Monday. “Others die on the way back.”

NCDs are a growing problem in Kenya and across the African continent. For every death due to HIV in 2005, cardiovascular disease killed five others in Africa. By 2015, chronic diseases will account for a quarter of deaths in Africa, according to the World Health Organization. And by 2020, the largest increases in NCD deaths will occur in Africa, by far surpassing any of the developed countries, the WHO estimates. The global health body predicts that if this trend continues in Africa, NCDs alone will kill far more people than deaths due to communicable and nutritional diseases put together.

While there has been a global pledge to reduce NCDs, to date, funding for tackling these diseases has not caught up with the magnitude of the problem.

“We have 1.6 million people suffering from diabetes in Kenya today,” said Macharia. “That is the same number of people who have HIV.”

Yet, Macharia said, donor funding for diabetes was nowhere close to the aid available for HIV.

On Monday, government officials and private investors came together for a panel discussion on NCDs organized by the Corporate Council on Africa, a non-profit organization that promotes business and investment between the US and Africa. Along with Macharia, the featured speakers included representatives from healthcare companies, non-profit organizations and government – all equally concerned about the problem of NCDs. They brainstormed how to tackle the burden of NCDs and the effect such widespread diseases have on the economic and social development on Kenya and across Africa.

The discussion, which was held in Washington DC, coincides with the US-Africa Leaders Summit, a gathering of various Heads of State from both continents hosted by President Barack Obama in the capital this week.

Despite growing concerns about NCDs, funding for them is disproportionately lower than those for communicable diseases, the panelists reported. Though the World Health Assembly (WHA), the WHO’s decision-making body, announced last year that it was targeting a reduction of NCDs by 25 percent by 2025, the panelists agreed that the WHA’s goal may not be met without some immediate interventions such as increasing health care centers for these diseases across Africa and investing in innovative, portable and inexpensive equipment to detect and treat heart disease and diabetes. Such interventions must be made on the part of governments in collaboration with the international donor community, the panelists said.

More interventions need to happen “because non-communicable diseases are on the rise especially in the middle-income countries,” said Dr. Tom Achoki, director of African initiatives for the Institute for Health Metrics and Evaluation (IHME), who was part of Monday’s panel.

A study by IHME published earlier this year found significant gaps between funding and the burden of NCDs.

“Funding related to this category expanded from 2010 to 2011,” according to the report. “[Y]et while NCDs are a prominent and rising portion of disease burden in the developing world, they are not a primary focus of development assistance for health.”

Faced with these gaps in donor funding, some independent agencies – including nonprofit groups as well as healthcare professionals – have begun addressing the problem in their own ways in partnership with individual African country governments.

Last Mile Health, for instance, is a Boston-based non-profit that has partnered with the Liberian government, private business, and American health experts to help train medical workers in the country, which has long since been ravaged by war and basic healthcare challenges. The nonprofit’s CEO and founder, Rajesh Panjabi, said that working with a company like Medtronic, the world’s largest medical technology company, has helped fill the void in funding by providing medical equipment and their expertise in healthcare innovation.

“We’ve been fortunate to partner with Medtronic,” said Dr. Panjabi. “And have been providing assistance to frontline health workers that integrate non-communicable disease care with maternal disease care in that setting.”

There are signs, too that donors, including the US Agency for International Development, are beginning to take NCDs more seriously in their funding decisions, “Three-quarters of our investment are in NCDs,” said Jimmy Kolker, USAID’s assistant secretary of global affairs, who also spoke on the panel.

Still, to truly address the problem viably, the panelists agreed that donor funding alone would not solve the problems in Africa. While international aid directed towards treating patients suffering from NCDs is essential, the funding has to be used to train local health professionals and create enough number of health facilities all over Africa to treat these diseases.

“At the end of the day, you cannot look at a system based on philanthropy alone,” said Majid Kaddoumi, vice president of Medtronic’s operations in Middle East, Turkey and Africa. “You have to build a sustainable system.”

More from GlobalPost: WHO calls for scaled-up action for non-communicable diseases