I’m going to level with you. I’m not a huge fan of a lot of the music I hear on public radio.

I hear a lot of throat singers, a few too many pan flutes, and a disturbing plethora of thumb pianos.

Oh, and way too many hipsters with ukuleles and autoharps preciously strumming away at tiny desks.

And I guess that's why I was asking myself recently: why not have some more, you know, rock. What about AC/DC? They’re Australian, right? They’d fit right in on a show called “The World,” wouldn't they?

But then I remembered that my inner AC/DC monologue goes something as follows.

The opening chords to “You Shook Me All Night Long” ring out, and I think: awesome, powerful, nasty (in a good way).

Then the lyrics hit. “She was a fast machine; she kept her motor clean,” etc.

And I think: awful, puerile, nasty (in a bad way).

"Knocking me out with those American thighs," etc.

I wasn’t always this schizophrenic about Australia’s greatest contribution to rock music.

I was raised on a steady diet of AC/DC. Where I grew up, you really couldn’t avoid it. Turn on the radio in southern Indiana in the 70s and 80s, leave it on for longer than 15 minutes, and you were almost guaranteed to hear an AC/DC song. Unless, of course, "Stairway to Heaven" and "Freebird" were on back-to-back.

Don't get me wrong. I wasn't complaining when I heard AC/DC. It was the ultimate psych-up music for all that time I spent playing left-bench during high school football games, not to mention the perfect soundtrack to all manner of unparalleled 17-year-old stupidity that occured after the game.

And then, somewhere along the line, I put my love of Australia's top rockers into the closet.

Awful, puerile, and nasty (in a bad way) won out.

But recently, I picked up a review copy of a book that had come into the office: "The Youngs: The Brothers Who Built AC/DC."

The book's just out now in the US, and it has one very simple, very powerful message for those who would like to dismiss AC/DC as childish hacks: “Stop being so bloody pretentious!”

Thank you, Jesse Fink, for talking some sense into me. Fink is the author of the new book on the Aussie band.

“No matter how hard you try not to react to their music, it's impossible. You cannot listen to an album like ‘Back in Black’ and not move,” Fink tells me when I reach him via Skype at his home in Sydney. “That's what I wanted to celebrate with this book — the idea that it's okay to rock.”

Damn straight, it’s about time somebody said it. Public radio, are you listening?

Fink goes on to tell me that he didn't really see the book coming.

I mean, he knew about AC/DC.

"Every Australian kind of has it in their DNA," he says with a laugh. "It appeals to our convict mentality."

But Fink didn't have a personal connection to the music. Until, that is, he was stuck dealing with the aftermath of a messy divorce a few years back.

"You know there was one night where I was at home, alone, on an early Sunday morning. It was two o’clock, and I’m sorting black socks on the end of my bed. And I felt generally suicidal.”

And then, for whatever reason, Fink says he put on some AC/DC. It was their song “Gimme a Bullet.”

“That song really kind of got me through that night,” Fink says. “The following morning, I put some AC/DC on and went for jog, and then the next day, and then the next. Suddenly, AC/DC had become part of my life; it was a late-in-life conversion for me.”

Before he knew it, Fink was sending out feelers for a book on the nucleus of the band. That would be the Young brothers: George, Malcolm and Angus.

The Young family had come to Australia originally by way of Glasgow, Scotland. And to this day, they remain, shall we say, a bit clannish. Notoriously disinclined, Fink found out, to talk to him, or anyone else in the media, about their lives or the band.

“To be honest with you, I was being completely naïve. You know, I came up with this brilliant idea. 'Hey, a book about the three Young brothers.' And then it was, ‘Oh, my God. What have I taken on?’”

But through interviews with those who've worked closely with the Youngs over the years, including a few who have never aired their AC/DC laundry before, dirty or otherwise, Fink managed to piece together a great narrative of how the trio steered AC/DC to global stardom.

A lot of it is down to older brother George, who got his start as the rhythm guitarist in the ‘60s Australian band, The Easybeats.

The Easybeats never found huge success. In his book, Fink argues that George Young figured The Easybeats lack of success was due in large measure to the fact the band tried to be too many things at the same time: a surf band, a blues outfit, and straight-ahead rockers.

But that “chugga-chugga” guitar sound at the start of an Easybeats track like “Good Times?” Just crossfade that into an early AC/DC track like “It’s a Long Way to the Top (If You Wanna Rock-n-Roll).

That's the sound George Young told his brothers, Malcolm and Angus, to turn up to 11 in AC/DC.

“George went to his younger brothers and said, ‘Look, don't make the same mistake I did. Stick with what we know best. And that's rock.’ And that's what AC/DC did,” Fink says.

Not that the way to the top has been easy for AC/DC. The band has survived the death of original lead singer Bon Scott. Bassists and drummers too, not to mention agents and labels, have all come and gone. Much of the going was a product of the Young brothers making decisions about what they felt was best for the band, Fink says.

But the AC/DC formula?

It remains rock solid, as does the Young brothers’ steerage of the musical ship.

There's George, still pulling the strings behind the scenes. If the rumors are to be believed, he also played bass on some studio work the band did, although he went uncredited.

On stage, Malcolm's in the back with his 1963 Gretsch Jet Firebird, laying down the rhythm.

And up front, there's Angus on lead guitar, petulantly dancing across the stage in his school-boy uniform, fingers flying over the frets and building unbelievable crescendos on top of Malcolm. 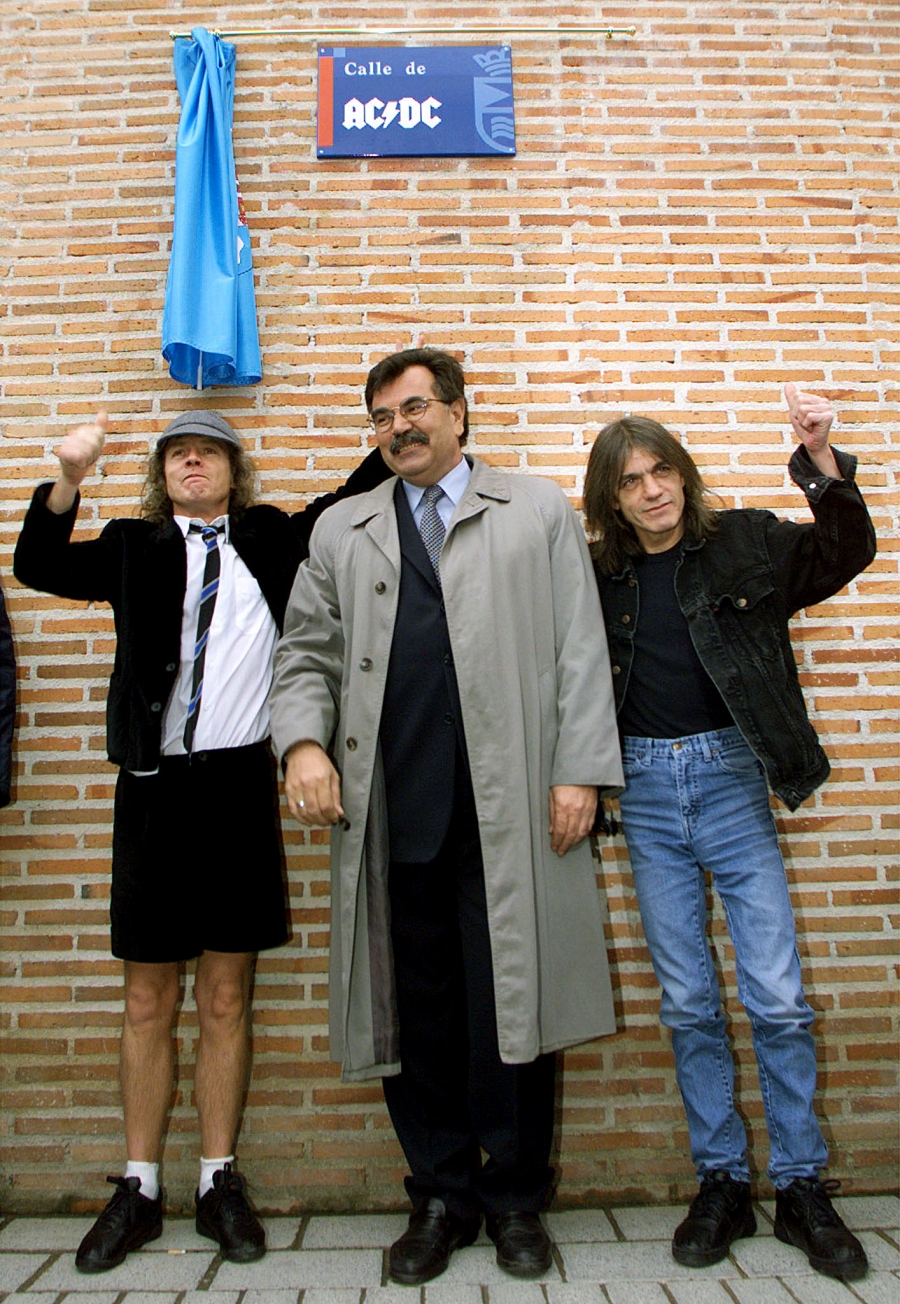 Yes, and then some.

AC/DC long ago went from mere band to ridiculously lucrative global brand. Even if you hate them, you can probably recognize the logo, the iconic one with the lightning bolt separating the AC from the DC. Fink compares it to the Nike swoosh, or the Coca-Cola logo.

“I don't know of any other band where you can go to the remotest part of the Earth, and find a Buddhist monk with an AC/DC t-shirt under his robes,” says Jesse Fink with a chuckle. “You go to Brazil, Argentina, Russia, Indonesia. There seems to be an AC/DC fan club for every country on earth. I mean, what other band can do that?”

Not many, that’s for sure.

And their songs have inspired legions of would-be imitators and unique cover bands. Dig a bit, and you'll find a Finnish bluegrass band (I can't believe I just typed that) called Steve'n'Seagulls playing an AC/DC cover. That's along with US band Hayseed Dixie (you see what they did there?), who do a bluegrass version of "Highway to Hell," among other favorites.

If classical's more your speed, the Croatian virtuoso cello duo called 2Cellos rocks numerous AC/DC tunes, including "You Shook Me All Night Long." Seriously, click that. Or this.

And the Boston boys, Dropkick Murphys, do a version of "It's a Long Way to the Top" that Jesse Fink says is almost as good as the AC/DC original.

Because you see, it's the original that keeps Fink, and millions of other fans, always coming back for more AC/DC.

“You put them on 1,000 times, and they still sound so good. It's like you're hearing them for the first time. Their music for me never gets stale. I'm coming to love them more and more,” Fink proudly admits.

Since reading Fink’s book, I’ve dug out my old AC/DC albums, and downloaded some new ones.

I’ve started learning the bass lines to some of their songs. (No, I don’t wear a school uniform when I practice. Well, not yet anyway.)

And AC/DC's anthemic track “Thunderstruck” is now the motivation I use to limp my way to the finish line at the end of my weekend jog.

I've made the band a part of my life again, openly and semi-proudly.

Like I said: Awesome. Powerful. Nasty, but in a good way.