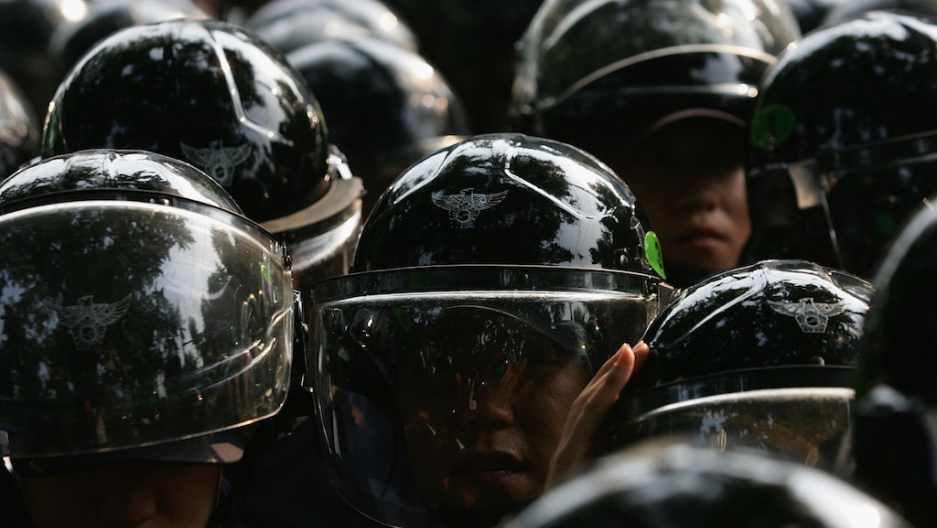 In Gwanghwamun Square, a government district and popular rally spot, an army of riot police recently put up an unusually colossal blockade. Traffic was halted and sidewalks were obstructed to prevent the advance of a mass demonstration of, well, poetry readings and memorial songs for victims of the Sewol ferry sinking.

Were they North Korea sympathizers?

Rather, the event revealed the incredibly low trust that the South Korean government places in its people — and the extent to which its people return the favor. The thousands of demonstrators were suddenly halted on the final stretch of a peaceful two-day rally, while demanding a parliamentary investigation into the disaster that killed close to 300 people.

About 600 bereaved family members of the victims — many of them high school students — joined the march. But it ended in a scuffle when demonstrators tried to break through police lines, injuring several people.

So why the paranoia over demonstrations in this powerful and stable democracy, where free speech hardly poses an existential threat to peace, order and the rule of law? South Korea, after all, has swiftly climbed the ladder out of poverty, sustaining democratic rule on a continent replete with despots.

Just 27 years ago, however, it was a hard-nosed dictatorship. Fears of the government continuing to overstep its authority are alive and well, thanks to an unending raft of political scandals in recent years. Those include revelations that the National Intelligence Service secretly ran an online propaganda campaign to get the current president, the daughter of the country’s longest-serving dictator, elected in 2012.

A United Nations report released on July 24 found that South Koreans’ trust in their government was lower than nearly all countries studied. The Asian nation was more distrustful than Iraq, Ukraine, and Nigeria.

This is apparently nothing new. In his 1995 book "Trust: The Social Virtues and The Creation of Prosperity," political scientist Francis Fukuyama similarly paints South Korea as a “low-trust” society, along with Italy and France.

Dysfunctional politics, excessive state interventions, and a problematic economy. “High-trust societies,” he argues, include the likes of Germany and the US.

Indeed, South Korean police have long resisted outside questioning, and a few government ministries have a reputation for ducking the simplest of inquiries. When asked by GlobalPost about the massive sidewalk and road cordon, three officers declined to comment. A spokesman from the National Police Agency similarly did not respond to multiple requests for comment.

One officer, who would not give his name, finally told news site Asian Correspondent that the protest was illegal simply because it was blocking traffic — even though the police were actually the ones jamming the roads.

“If blocking the vehicular traffic was a problem, the police would have blocked the march earlier,” said Kyung-sin Park, a law professor at Korea University in Seoul. “Interfering with the cars was clearly not the reason for the police blockade because the police blockade covered pedestrian strips as well.”

This type of confrontation is not uncommon.

In April, just two weeks after the Sewol tragedy, police halted family members who chartered a bus to Seoul to present their grievances to President Park Geun-hye. Last December, more than 4,000 officers swept the headquarters of a prominent labor union simply to arrest a handful of railway strike leaders.

Many South Koreans are happy to match the government’s lack of trust, stirring up conspiracy theories and hurling irrational criticisms at authorities, sometimes for events out of their control.

In July, when police said they had found the decomposed body of the ferry operator owner Yoo Byung-eun in a plum orchard, they were greeted with wild attacks from civic groups, who asked why it took six weeks to identify the nation’s most-wanted fugitive.

Some conspiracy theorists believed the Park administration, which has seen a dip in approval ratings since the ferry disaster, used the announcement to distract attention from a controversial health-care privatization bill. On July 30, the ruling Saenuri Party won an unexpected landslide in midterm elections.

But others complain that the emotional distrust and conspiracy mongering can get mind-numbing. “In this untrustworthy society, having a rational mentality does not make sense at all,” said Boryung Lee, 32, a housewife in Seoul. “If somebody is [mentally] healthy, there is no way to go but crazy.”