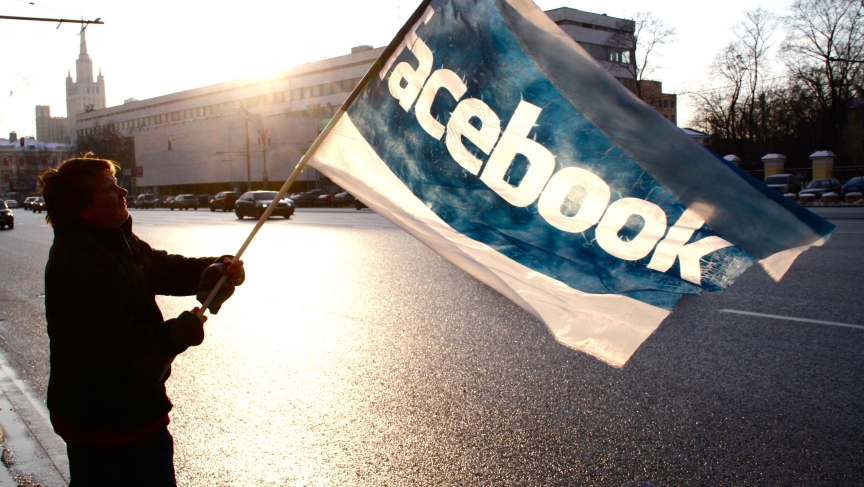 An anti-Kremlin protester waves a Facebook flag to passing motorists in Moscow in 2012. Back then, social media fed Russia's opposition movement. These days, the Kremlin is passing a range of laws to stem its influence.
Credit:

Ever since Edward Snowden received asylum in Russia last year, Russian authorities have showcased his revelations of US government surveillance at nearly every turn.

“Does Russia intercept, store or analyse in any way the communications of millions of Internet users?” Snowden asked Putin during his annual televised call-in show this past April.

Putin used the opportunity to assure his audience that Russia used surveillance only with strict permission of the courts.

But Snowden’s decision to prolong his stay in Russia comes just as the country’s government has moved to restrict online freedom and expand existing surveillance at home.

Under a law signed by Putin last month, western tech companies doing business in Russia must move their servers on Russia soil by September 2016.

Russia says the law is to protect Russian data from US snooping. But observers argue the real purpose is to give Russia’s security services something they've have never had before — “back door” access to the profile data of Russian internet users that's held by Western tech companies.

“After Snowden’s revelations, our authorities said, ‘Okay, we don’t want the Americans to monitor our people — we want to monitor them,’” explains Sarkis Darbinyan, a lawyer affiliated with the Russian Association of Internet Users. “And so the country that took in Snowden so he could air his revelations became one of the leaders in mass surveillance of its own citizens.”

A little more than two years ago, Russia’s opposition took to the Internet to organize mass street protests against the return of Putin as president. While the movement ultimately fizzled, the Kremlin took notice of the Internet’s power, Darbinyan says — and not in a good way. Putin has referred to the Internet as a “CIA Project.”

“Particularly after the Arab Spring, after the events in Ukraine, I think it scares certain people in the Kremlin that this could happen in Russia," he says.

With such fears in mind, the server law isn't the only one on the books that could stifle Internet freedom. One requires bloggers with more than 3000 readers to register as full-fledged media outlets, exposing them to libel liability for any content — even posted comments. There are also changes to Russia’s murky “anti-extremism” law. Now, an ill-advised post or tweet can land you in a whole lot of political trouble.

Artyom Loskutov, a Siberian artist and activist, knows this better than some. He recently came under fire after distributing information online about a march for Siberian federalization.

It’s an event he and his friends were organizing in Novosibirsk to protest what they say is a long simmering dispute with Moscow — specifically, how the Kremlin spends Siberian tax rubles.  It's also a clever play on the Kremlin's own insistance for 'federalization' of neighboring war-torn Ukraine — where Moscow has insisted on constitutional reform to respect the rights of Russian speakers in the country's east.

“We were talking about having a march, which is absolutely allowed under law,” Loskutov says. “But in writing about it, we wrote about creating a Siberian Republic within the Russian Federation. There was no talk about separatism or anything, it’s just that Moscow doesn’t govern the regions very effectively.”

Either way, it was more than Russia’s Internet governing body was willing to tolerate. News of the march was stripped from social media, including Facebook. Under threat of a total blackout, a dozen media websites also took down information. Even the BBC’s Russian service was issued a warning, which they largely ignored despite ongoing threats.

This gets to the heart of the problem: With traditional media largely under state control, the Internet now serves as the primary source for independent news and discussion. And some argue that the new laws are already having an impact.

“The media landscape and how people talk online is already changing,” says Andrei Soldatov, who writes about surveillance issues in Russia. “In my circle ... [they’re] more cautious about expressing their views.”

These laws now give the Kremlin powerful new tools to thwart perceived enemies at home — and Edward Snowden has a front row seat to a controversy over surveillance that seems to follow him wherever he goes. How loudly he speaks up on the issue may depends on how long he plans to stay in Russia.