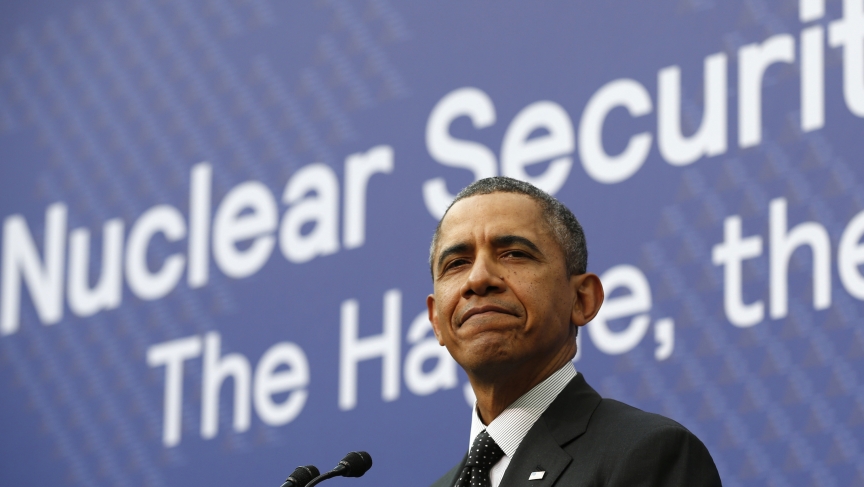 U.S. President Barack Obama looks up as he and Netherlands' Prime Minister Mark Rutte hold a joint news conference at Gemeentemuseum Den Haag at the conclusion of the Nuclear Security Summit in The Hague March 25, 2014. World leaders called on Tuesday for countries to minimise their stocks of highly-enriched nuclear fuel to help prevent al Qaeda-style militants from obtaining atomic bombs.
Credit:

This is what the US Department of Energy said last week in a report they released:

"Effective nuclear security for all stockpiles worldwide will be almost impossible to achieve without Russia and the United States working together."

President Barack Obama said as much himself at the Nuclear Security Summit held in Holland this past March.

"It is important for us not to relax, but rather accelerate our efforts over the next two years, sustain momentum, so that we finish strong in 2016," he said.

But accelerating they are not. In the wake of the annexation of Crimea and turmoil in eastern Ukraine, relations have actually taken a step backward.

This is not the direction that relations should be going warns Matthew Bunn, who directs the "Managing the Atom Project" at the Belfer Center for Science and International Affairs at Harvard. Halting cooperation doesn’t just punish the Russians.

“We are investing in nuclear in Russia not as a favor to the Russians but as an investment to our own security. It’s important to us that this material — and the Russians have the largest stockpile in the world — be secure and it does not fall into terrorist hands,” Bunn said.

Bunn does credit President Obama for taking a leadership role in nuclear non-proliferation by establishing the nuclear security summit process that has brought leaders from all over the world together and has resulted in major progress. Still, Bunn is concerned about proposed budget cuts in 2015 that slash funding for nuclear security.

“Right now they are cutting back on the budgets for nuclear security too fast and too soon,” said Bunn who recently published a new report “Cutting Too Deep,” which analyzes those budget cuts and how they would delay the work to upgrade security on nuclear material in Russia and around the world.

How is Russia responding to the latest nuclear security chill? Well, not very pro-actively, Bunn said.

“Russia has taken a complacent view that all of its material is secure and accounted for,” he explained..

While it is true that nuclear facilities in Russia are far more secure than they were 20 years ago, Bunn said there are still significant weaknesses that must be addressed properly.

“People feel like ‘Oh, yeah I remember back in the 1990s this was a problem and there was highly enriched uranium showing up in parked cars in Prague and so on, but surely this isn’t a problem any more.’ The reality is this still is a problem," he said.

The most recent major seizure of stolen highly enriched uranium was in 2011 in Moldova, according to Bunn. There have been seizures in 2010 and 2006 and 2003. “This is an on-going reality we have to work with.”

Bunn’s father, George Bunn, saw nuclear proliferation in its first phase.  Following World War II, he worked for all the major nuclear agencies in Washington, helped negotiate the first non-proliferation treaty, he even had to deal with mutually assured destruction.

“I think he’d be sleeping a lot better today, the Cold War is over,” Bunn said of his father. But what his father did eventually lose sleep over was the potential for nuclear materials to get into the hands of terrorists.

After 9/11, Bunn recalls his father saying at a meeting at the International Atomic Energy Agency, “If I had known then what I know now, I would’ve made sure there was something about keeping this material secure written into that treaty.”

Is he optimistic about that prospect?

“No,” Bunn said. “This is a problem that’s going to go on for a long, long time, as long as terrorists bent on mass destruction and nuclear materials that could be used to make a crude nuclear bomb both co-exist in the world and unfortunately that will be true for decades to come.”

However, Bunn is not a total pessimist.