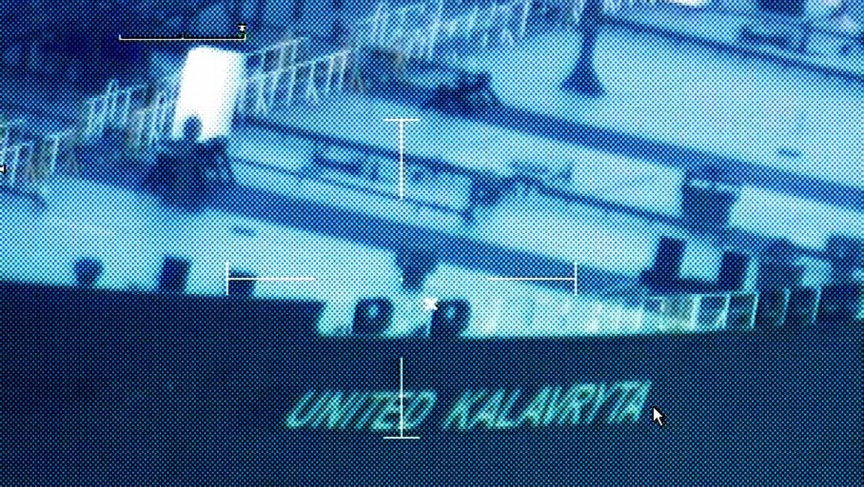 A US Coast Guard image shows the oil tanker United Kalavyrta, which is carrying a cargo of Kurdish crude oil, approaching Galveston, Texas, on July 25.
Credit:

US Coast Guard via Reuters

An oil tanker the length of three football fields is anchored 60 miles off the coast of Texas. It's been there for nearly two weeks, and no one knows where it's going next.

That's because it's carrying a million barrels of crude oil from the Kurdish area of northern Iraq. For the Kurds, it represents the beginning of an oil industry in an independent Kurdistan. But for authorities in Baghdad, the ship is carrying $100 million that belong rightfully to the Iraqi central government.

Rhiannon Meyers, an energy reporter for The Houston Chronicle, says the tanker United Kalavrvta  — sometimes known as the United Kalavyrta — "has been doing donuts in the Gulf." It's circling in international waters rather than approach the Port of Galveston to unload.

"Modern shipping tracking software makes it easy for anyone to track ships online, so this tanker was pretty closely watched as it neared the US," Meyers explains. "Iraq's lawyers were ready for it when it got here."

The legal battle began when US Magistrate Judge Nancy Johnson ordered US Marshals to seize the United Kalavrvta's crude oil cargo on July 28. The marshals were supposed to supervise the cargo until it could be turned over to Iraqi authorities for safekeeping. But the next day, the judge announced that the tanker was beyond her court's jurisdiction — still sailing in international waters.

Lawyers for the Kurdistan Regional Government later asked a US court to dismiss Johnson's order to seize the cargo. They claimed the KRG has the right under Iraq's constitution to export oil. But no matter who's right it is, no one's buying it at the moment.

"The legal battle pending in the US makes it really untenable for any US companies to touch that cargo," Meyers says. "And the identity of the buyer of the tanker's crude remains a mystery. Some reports surfaced last week that a local Houston refinery in the past had purchased Kurdish crude. That refinery has come out and said 'We won't purchase any more in the future,' which really deals a big blow to the KRG in trying to unload this cargo on someone."

Meyers thinks the ship may eventually be forced to sail to another country to find a buyer. But for now, the tanker, its cargo and its crew are going nowhere.