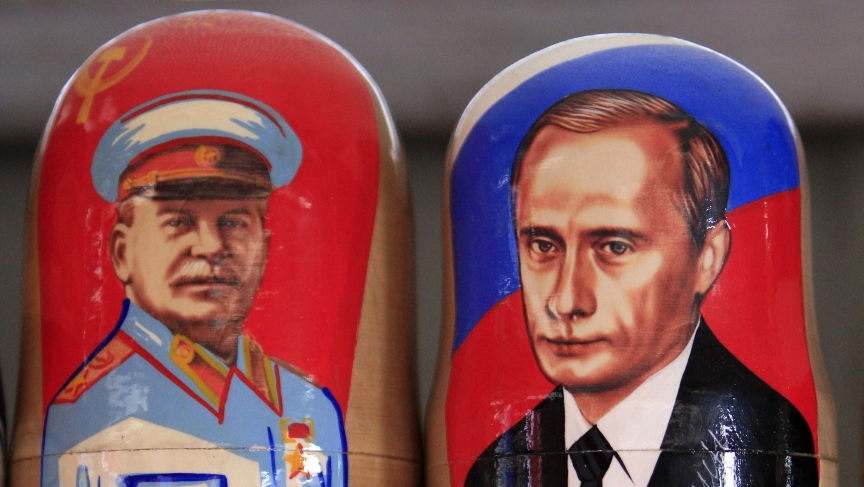 Notice the possessive pronoun in there? It's my country, not this country. It makes the lyric and the singer sound more patriotic, right?

Well, writer Masha Gessen wrestled with this concept recently. But she did it in relation to Russia. That where she's from. And until recently, she lived and worked as a journalist there. But she moved to New York a few months ago, worried that her family could be persecuted in Russia because she is gay.

Last month she went back on a brief reporting trip. She told us her visit began just as news was breaking about the shooting down of Malaysia Airlines flight 17 over Ukraine. She says she landed in Moscow and went to a dinner party right after the plane went down. A friend told her, "Did you know, we shot down an airplane?"

But another friend at the party, a linguist, posed the question of why they felt the need to use the personal pronoun. Why couldn't they just distance themselves from their country, like people in the US do? Why couldn't they use "this country?"

She wrote about this experience in an Op-Ed column for The New York Times. She says taking ownership of the country by using "we" is a double-edged sword. "I think for Russian dissidents, and I mean that broadly, the differently minded, it's a dilemma," she says. "On the one hand, not saying 'my country' is liberating because obviously I didn't invade Ukraine. But on the other hand it's abdicating responsibility and it's abdicating the country and it's leaving it to them, the one's who did invade Ukraine."

Gessen first moved to the US as a teenager, only to return to Russia to work as a journalist for 20 years. She's been a US citizen since first moving to the US, but she always made a point of using the possessive when talking about Russia. "I made it a point of saying, 'Our country.' Even when it became fashionable among the Western minded Russians to say, 'This country.'"

Gessen realized on this trip back that she doesn't feel that ownership anymore. She is there as an observer, as a journalist. She says it was a relief to no longer feel the shame she'd been accustomed to feeling in her last few years of living in Russia.

So if Gessen is at the point where she no longer uses "we" or "our" to refer to Russia, is she ready to use it for the US? Or maybe ready to say that New York City is "her" city?

She smiled at the question. She says she is definitely in a place where she can say that New York City is her city. "This time I came back with my wife and our three kids and US law now allows all of us to live here legally. And it's actually true for a lot of people I know. There's been a real influx of LBGT [refugees] from Russia," she says. "So I feel very proud of this country for giving refuge to people who are in danger in their own countries.