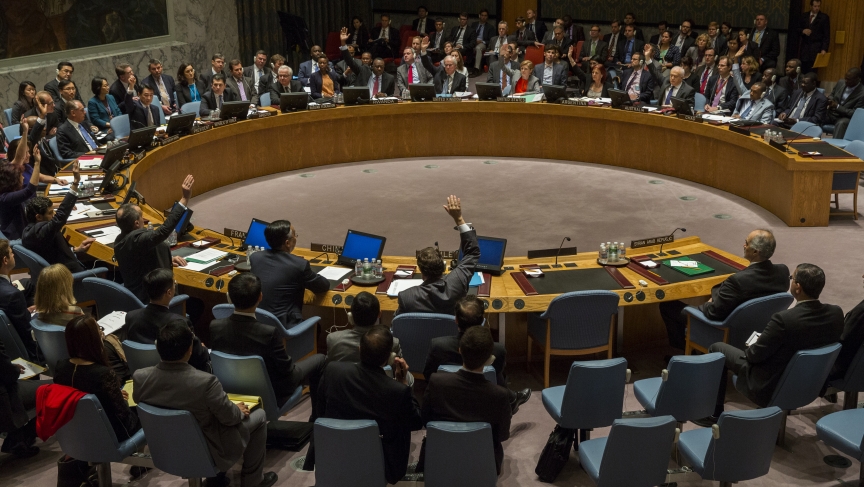 All members with the exception of Russia's UN Ambassador Vitaly Churkin and China's deputy U.N. Ambassador Wang Min vote in the United Nations Security Council in favor of referring the Syrian crisis to the International Criminal Court for investigation of possible war crimes.
Credit:

While civilian casualties mount in Gaza, hundreds of thousands of civilians are already dead in Syria. The killings violate the Geneva Conventions, but world leaders are worried that those protections are fading away.

Last week, David Miliband, former British foreign secretary and president of the International Rescue Committee, said "the norms and laws that have been built up over centuries to defend civilians during war — sanctified in the Geneva Conventions after the Second World War — are being lost." The Conventions were ratified in 1949 and laid out a code of conduct for war with specific protections for civilians.

President Barack Obama has conceded that the US has not stuck to the Geneva Conventions in handling prisoners. "In the immediate aftermath of 9/11 we did some things that were wrong," President Obama said last Friday during a press conference. "We did a whole lot of things that were right, but we tortured some folks. We did things that were contrary to our values."

Given the current conflicts throughout the Middle East, where does the world actually stand on the Geneva Conventions? "Every country in the world has agreed, obliged itself to obey certain laws, with the primary rule being the protection of civilians. But, sometimes in very graphic cases like we're seeing now, they appear to violate those laws," says Diane Amann, professor of international law at the University of Georgia School of Law.

On the whole, Amann says, it's up individual nations and non-state actors like militia groups to follow the rule of law. However, in cases where the Geneva Conventions are violated, there are courts, tribunals and other ways that the international system of law tries to hold people accountable.

Recent events like barrel bombings in Syria and the downing of Malaysia Airlines flight 17 have generated calls for the world to remember the rules of war. But Amann says the global community has developed a system to protect people that doesn't seem to be implemented very well.

"An issue precedes the question of war crimes or violations of war — the question of whether you can prevent war or regulate war before it happens," she says. "The mechanism that we've put in place for that is the UN Security Council. It has trouble doing that when one if its five permanent members has a stake in what's going on."

There are some glimmers of hope for justice, Amann thinks — just not necessarily anytime soon.

"I think at times, if you look at things like the war crimes tribunals in Yugoslavia, Rwanda and Sierra Leone, at times we do see some measure of accountability," she says. "Unfortunately, it's in the long term."