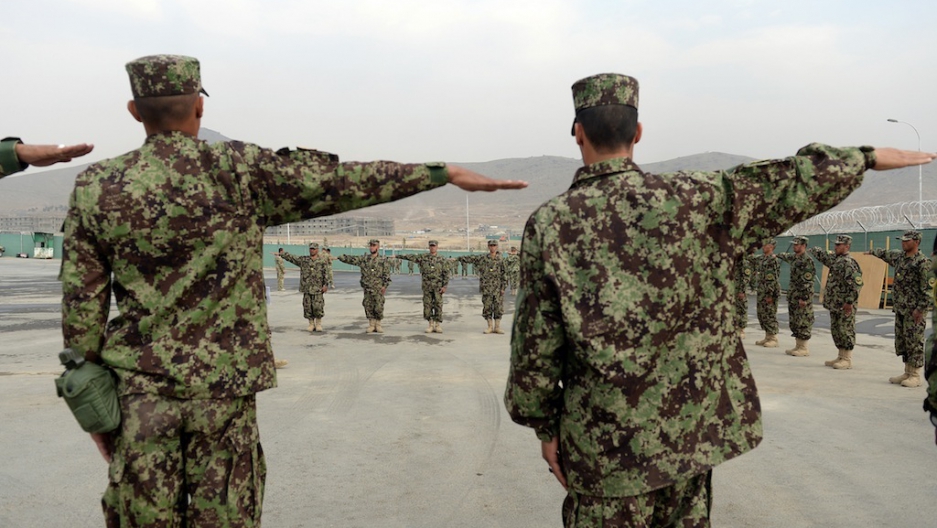 The war in Afghanistan has attained yet another dismal milestone: The highest-ranking United States military officer killed there since 9/11.

Maj. Gen. Harold J. Greene died Tuesday when a man in an Afghan army uniform opened fire on a group of coalition troops at a military academy just outside Kabul.

Greene, who was 55, was involved in preparing Afghan soldiers for the US-led coalition's withdrawal at the end of this year. An engineer and skilled logistician, he reportedly had not seen combat in more than 30 years of service, until the Army sent him to Afghanistan earlier this year.

Officials said this is the first general killed on an overseas battlefield since the Vietnam War.

The identity of the shooter, who was killed, has not been released. Pentagon spokesman Rear Adm. John Kirby said there was no reason to believe the Taliban or any other insurgent groups were involved.

“We have no indications that [the gunman] was anything other than Afghan national security forces,” Kirby said briefing reporters Tuesday.

In addition to the US general killed, as many as 15 were injured, according to Kirby. Among the wounded was a German general, but Germany’s military said in a statement that his injuries were not life threatening.

This is the latest in “green-on-blue” attacks — in which Afghan soldiers fire on troops from the International Security Assistance Force, the US-led coalition known as ISAF.

Such attacks have declined in recent years, both because there have been fewer foreign troops on the ground in Afghanistan, and because ISAF instituted more stringent security measures after a spate of shootings in 2012, when 61 coalition soldiers were killed. By contrast, 13 died last year, and Greene is the fourth killed so far in 2014.

Kirby was at pains to emphasize that Tuesday’s deadly shooting would have no wider effect on the mission in Afghanistan.

“I see no indications that there has been a degradation of trust,” he told reporters, adding that he also saw “no impact to plans to draw down our forces.”

Not only is the country in a deep political crisis due to a disputed presidential election, it is facing possible economic disaster as the international funds that are sustaining the government and fueling growth leave along with foreign forces.

Whether or not the US is able to maintain a military presence in Afghanistan post-2014 depends on a Bilateral Security Agreement that has been negotiated but not yet signed. It awaits the approval of whomever ultimately emerges as Afghanistan’s next leader.

If the BSA is signed, the US will maintain a small — 9,800 — contingent of “advisers” to help the Afghan national force get on its feet.

Judging by this new attack, this may take some doing.

The Taliban are far from a spent force. An independent assessment by the Center for Naval Analyses concluded in February that “the security environment in Afghanistan will become more challenging after the drawdown of most international forces in 2014,” since "the Taliban insurgency will become a greater threat to Afghanistan's stability ... than it is now.”

But the US military is not, publicly, prepared to accept this version of reality.

Campbell is nothing if not upbeat. He told a frankly skeptical Senate during his confirmation hearings in July that Afghanistan was “on a positive path.”

“Everything I see, sir, is good news,” he said.

Last Friday, he told journalists at the Pentagon that recent reports that the Taliban has been gaining ground were more PR than fact.

The New York Times had reported that the Taliban were moving beyond their traditional strongholds to dominate crucial highways and even some cities close to Kabul.

“Their advance has gone unreported because most American forces have left the field and officials in Kabul have largely refused to talk about it,” wrote the journalist Azam Ahmed.

But Campbell dismisses such talk.

“A lot of what you’re getting on how bad it may have been down in the south, or this attack there, or some of the things in the east, is we have kind of lost the information war here,” he said.

The Afghan security forces are fully capable of dislodging the Taliban from any territory they may have gained, Campbell said.

But Tuesday’s attack is likely to expose some of the fault lines in the US-Afghan relationship.

The Special Inspector General for Afghanistan Reconstruction (SIGAR) released a new report last week that highlighted some of the problems.

It said the Afghan government is incapable of sustaining its military with its own revenues — and armed men who do not get paid can be very difficult to handle.

The Taliban, who in the past has been only too eager to claim “credit” for such attacks, denied involvement in Tuesday’s. Taliban spokesman Zabiullah Mojahed told the media that he was still trying to collect information on the shootings.

The Taliban’s website had a short story on the attack, but most of the details were wrong, including the number and nationalities of those involved.

While the Pentagon’s Kirby insists that the Afghan forces “continue to perform at a high level of confidence and competence,” Tuesday’s shootings show just how shaky that confidence could turn out to be.

Jean MacKenzie spent seven years in Afghanistan, where she worked as a journalist trainer at the Institute of War & Peace Reporting and served as senior correspondent for GlobalPost.