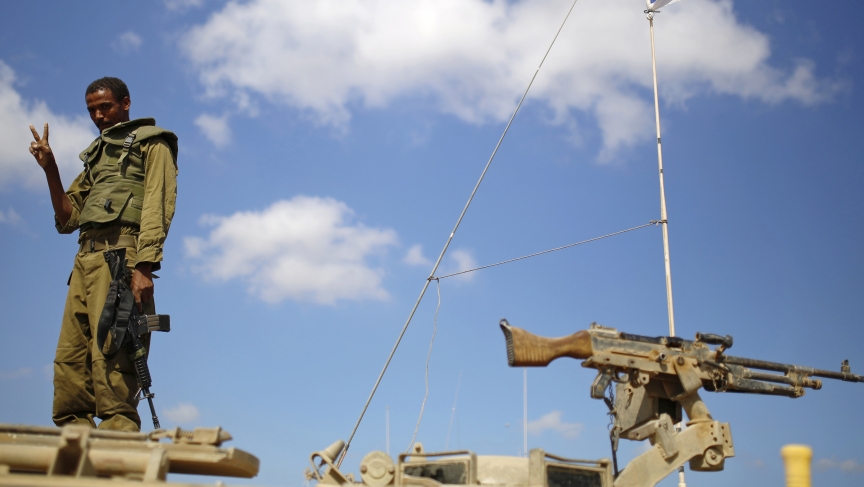 An Israeli soldier gestures at a staging area after returning to Israel August 3, 2014.
Credit:

It’s really tough covering this conflict between Israelis and Palestinian. It's polarizing in the extreme and that extreme polarization means opinions are hard and fast.

That’s why it’s difficult to even mention ways to move constructively beyond the current skirmish. Blogger and Middle East analyst Michael Koplow has seen the polarization on his Facebook page.

He says most people react to the violence in Gaza by expressing their vision for the future.

But, Koplow says, it's not a future rooted in the present — the way things actually are in the Middle East right now.

“The future they want to see is not one where the two sides come to an agreement that both can live by,” he says. “It’s a future where one side bludgeons the other into submission.”

There are so many different views of what is happening right now. Koplow says his friends on the pro-Israel side generally think Israel can do no wrong. They see every Israeli action in Gaza as a legitimate and a proportional response to Hamas rockets. Then on the other side are his pro-Palestinian friends who think any military action by Israel in Gaza is wrong. “And so there is a huge amount of anger on both side and it’s difficult to overcome,” he says.

Koplow thinks the question is the difference between sympathy and empathy. He doesn’t think anyone will sympathize with the other side. But he doesn’t think it’s unreasonable for people to try and understand where the other side is coming from. “I think if people were to think a little bit more about what the other side's actual narrative is, instead of painting it in these broad brush strokes that aren’t necessarily representative of reality, I think people would have an easier time at least arguing civilly,” he says.

Again. It’s tough. The deaths certainly make it hard, if not impossible. You need to see the other side, but the other side is getting harder and harder to see with each bombing, each rocket launch, and each and every death. It makes you depressed about the future of the Middle East.

But he adds, it might take decades to get to that point.