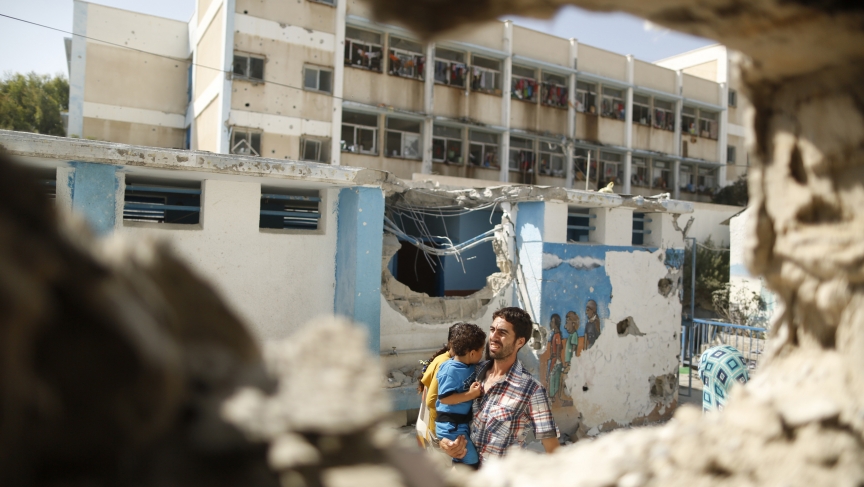 A Palestinian man, pictured through a damaged classroom, carries a boy as he walks at a United Nations-run school in the Jebaliya refugee camp in the northern Gaza Strip on July 30, 2014. Witnesses say the school, which is sheltering Palestinians displaced by an Israeli ground offensive, was hit by Israeli shelling.
Credit:

At a UN school where Gazans attempted to take refuge from Israeli airstikes, no one felt safe.

But when asked if they would leave, even after the school itself was attacked, they gave the exact same answer: "Absolutely not.

That's according to BBC reporter Martin Patience, who has visited two of the UN schools and talked to people seeking shelter. The United Nations Relief and Works Agency, which serves Palestinian refugees, runs 90 schools in the Gaza Strip. Hundreds of thousands of Gazans ran to the schools after Israeli airstrikes began last month, hoping they would be safe. But seven schools have been attacked during the fighting with Hamas, including an Israeli strike in Rafah this weekend that killed at least 10 people.

Patience calls the situation at the schools "pretty desperate. ... There’s 60 to 70 people in a room. There’s no running water and people have been living there for weeks."

But people are still unable to leave — they have no other place to go.

According to Patience, doctors in Gaza are also overwhelmed, even compared to previous Israeli campaigns. "They haven't been able to get any rest. They are running low on supplies. There's no electricity and they have been relying on generators," he says.

Patience says it's very difficult for him and other journalists to cover the war in Gaza and witness all the death and destruction. Another correspondent, AFP's Sara Hussein, has written about the unsually high number of dead children she's had to report on during this war. Patience remembers a particular child, a young girl girl of about 6 or 7, being buried.

"She was in a white shroud. [I] saw the blood on her face and she was put into the cemetery along with her mother, who was in a green canvas body bag," he says.

But as difficult as it is, Patience says, it's far harder for the people in Gaza.