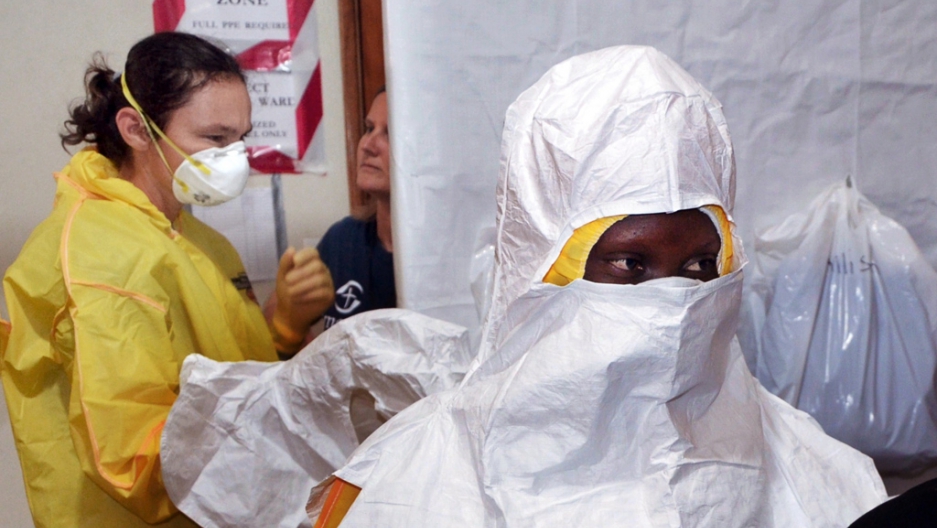 The Ebola virus spreading in parts of West Africa was first detected in 1976 in what's now the Democratic Republic of Congo. More than 2,000 people have died in the 38 years since with little progress toward any kind of cure or vaccine.

You might ask why doctors are slow to figure it out. Well, it's a pretty hard virus to study, for one. The virus itself evolves so fast that a vaccine today might do little to protect against an outbreak in the future. Also, people die so quickly from Ebola that it's hard to do human trials when a potential viable drug does become available.

Not to mention that studying Ebola is extremely dangerous. Research equires a "biosafety level 4" laboratory, which sounds like the kind of place you woudn't want to go to work in every day. Right now only two dozen such labs exist.

All that said, on Monday, an extraordinary thing happened. A serum was apparently flown by the National Institutues of Health — a biomedical research facility run by the government and based in Bethesda, Maryland — to Liberia, where it was admistered to two Americans who had contracted the virus. It was a last-ditch effort to save their lives. (It remains unclear, by the way, why the Americans got the honor).

The treatment, known as ZMapp, had never been tested on humans before. But the doctors that treated patients Kent Brantly and Nancy Writebol called the results "miraculous." Brantly is now back in the United States, and Writebol is expected to arrive in Atlanta on Tuesday. Both are said to be doing "remarkably" better.

The medicine is a cocktail of three Ebola antibodies and was developed by a San Diego-based firm called Mapp Biopharmaceutical with the help of tobacco leaves.

But it had been far from ready for human trials, and may have been provided to Brantly and Writebol through the USDA's "compassion use" regulation, which is extremely rare and probably requires a lot of paperwork.

There are some other Ebola drugs in the works, as well, though none are annywhere close to approval.

A Canadian company known as Tekmira Pharmaceuticals has been working on a cure for the past four years as part of a contract with the US Defense Department. Its treatment, TKM-EBOLA, sends the drug through a patient's bloodstream with tiny oil particles. While Tekmira began testing the drug on humans earlier this year, it was put on hold last month because of potential health concerns.

A third possible cure is known as BCX4430. It's been developed by a North Carolina firm called BioCryst Pharmaceuticals to treat a broad spectrum of diseases, including Ebola. It works by setting up a molecular road block to stop the virus from replicating, a process called chain termination. But it hasn't been tested on humans yet, and that isn't likely to happen for another five years.

On July 30, Mapp Biopharmaceutical won additional funding from the US military's Defense Threat Reduction Agency for ZMapp due to "promising results." The money will be used to prepare an FDA request for initial clinical testing.