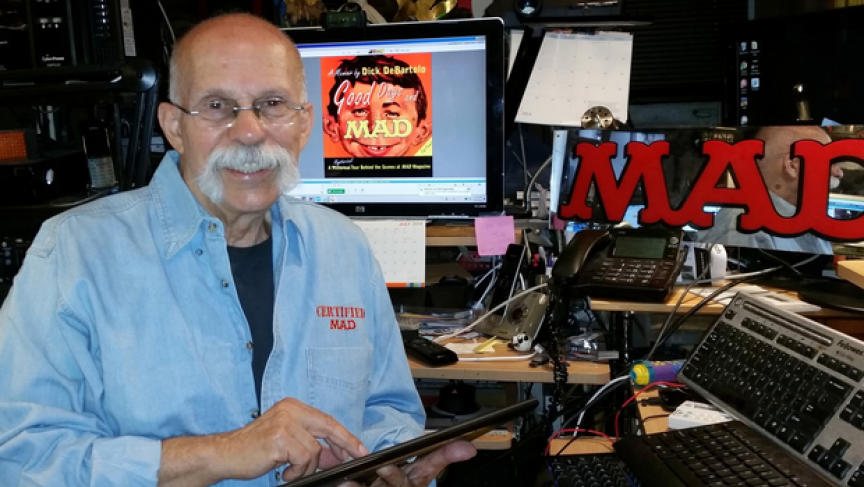 Comic writer Dick DeBartolo started reading Mad Magazine in high school. After about three issues he thought, "I don't want to read this. I want to write this!"

So he wrote a takeoff on some ads and sent it to Mad, he says. “Six weeks later I got back my own big envelope and I was so depressed.”

But when he opened the envelope, he found a surprise: “[It] was just stuffed with cardboard,” he says. “On the cardboard it said, ‘Ha, ha, ha! Thought this was your script being returned? We have bought your script.’” Stapled to the cardboard was a check for $100 and a note saying, “Please call us, because we'd like you to write more for us.”

Now 45 years later, DeBartolo is still at it. “At first it was just on and off, on and off,” DeBartolo says, “and then Bill Gaines, the publisher back then, said, ‘What do you want from us?’ and I said, ‘I just want to be in every issue.’ And he said, ‘You got it.’”

DeBartolo — also known as “Dickie D” and “Mad’s Maddest Writer” — has written for almost all the regular features at Mad. He's brainstormed everything from the Alfred E. Neuman covers to the fold-in at the back. He practically invented what's come down to us as the Mad Movie Parody.

“I have a letter in the bathroom from George Lucas saying there should be an Academy Award for satire for our take off on Star Wars — which we called ‘Star Bores,’” DeBartolo says. “It's one of my favorite things. That's why it's hanging in the bathroom.”

Born into an Italian immigrant family in Brooklyn, DeBartolo always wanted to be in show business. His father hated the idea. “My father was born in Italy, so showbiz was not a big thing in his life,” DeBartolo says. “A writer is not an occupation,” his father would say. “An occupation involves tools.”

DeBartolo’s first “tools” were a microphone and a tape recorder. He dreamed of being an MC. He printed R.D. Bartolo Studios on the wall and broadcast to the lady next door.

Like so many artists, DeBartolo’s dreams were driven by a need to escape: “Escape my father, escape my crappy childhood,” DeBartolo says. “I did some therapy and the analyst said, ‘You probably developed a great sense of humor to overcome depression.’ So it served me well.”

DeBartolo escaped Brooklyn and got all the way to ... Manhattan, where he lives with his long time partner, Dennis. Mad Magazine's demographic of primarily pre-adolescent boys is not known for their enlightened attitudes towards sexuality. But the offices at Mad were accepting.

Lots of people know Dickie D nowadays as "The Giz Wiz," his weekly podcast about gizmos and gadgets. He records the show from a home studio that's soundproof — and pretty much adulthood proof.

“I call it "Gizney Land," because I have a train telephone, and when it rings you hear steam and train whistles,” DeBartolo says. “I have many microphones, many cameras and I can broadcast to tens of thousands of people around the world.” It’s a big step up from the lady next door.

He may be keeping adulthood at bay, but Dickie D is getting older. Bill Gaines, the founder of Mad, died in 1992 and Dick still venerates the memory of the guy who sent him that first $100.

Gaines has a stone in the Botanical Gardens in Brooklyn. DeBartolo, though also from Brooklyn, expects no such honor. “Bill is famous. I'm a writer,” he laughs.