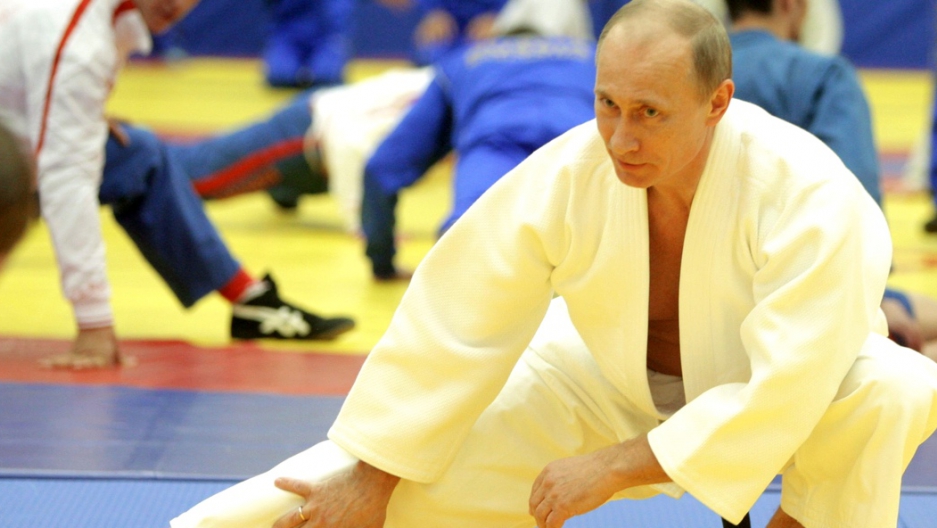 Being head of the world’s biggest ex-superpower is not easy. But Russian President Vladimir Putin does it without ever losing his (surgically enhanced) sangfroid.

No wonder — he’s had a lot of practice. In his 14 years at the top, Putin has had to face numerous crises, great and small.

Here are just a few.

Remember Y2K? The Millennium Bug was going to end the world when the calendar changed to 2000. Of course planes did not fall from the sky, and bank accounts were not magically wiped out. The real danger lay elsewhere — in the Kremlin, to be exact. That’s where an ailing and sclerotic Boris Yeltsin suddenly resigned, on New Year’s Eve, giving the presidency to his acting prime minister, Vladimir Putin. Russia rejoiced, for a while, to see a relatively young and virile incumbent. But be careful what you wish for….

On Aug. 12, 2000, just four months after Putin had officially been sworn in, the Kursk submarine caught fire and sank in the Barents Sea. All 118 sailors aboard perished, triggering a period of national mourning.

It also ended Putin’s honeymoon with his nation. The president was vacationing on the Black Sea at the time, and did not see fit to come back to Moscow to deal with the crisis for four days. The Russian navy refused all offers of help from foreign governments for nearly a week, provoking outbursts of public indignation when it was learned that at least 23 crew members initially survived the explosion and were waiting for rescue.

Putin’s popularity took a hit — sort of. In a poll conducted a week after the disaster, 65 percent of respondents said they approved of the president’s performance, down from 73 percent in late July.

A memorial at the Dubrovka Theater in Moscow, where Chechen commandos took hostages during the "Nord-Ost" musical production in October 2002. (Yuri Kadobnov/AFP/Getty Images)

On Oct. 23, 2002, some 40 armed Chechen rebels took a whole theater hostage. More than 800 spectators were held for two and a half days, while the militants demanded that Russia remove its troops from the breakaway Chechen Republic, which had been fighting for independence through two wars spanning nearly a decade.

Putin quickly showed what he was made of: no negotiations with terrorists. Instead, the special forces surrounded the building and began pumping in some form of nerve gas through the ventilation system. The only problem was, the Russian military would not tell anyone — including medical personnel — which gas was used, so no proper treatment could be devised.

In the end, all 40 rebels were killed — most from gunshot wounds administered after they lost consciousness from the gas. Of the hostages, 130 died, most from the effects of the gas.

Rumors abounded that the Russian security services were complicit in the attacks but no one has ever provided proof. As a result, Putin cracked down on Chechnya and also on the Russian media. One television station, NTV, displeased the master of the Kremlin with its critical coverage. By January, NTV’s head had been fired and the TV station had been effectively defanged.

Sept. 1, 2004: The war with Chechnya continued, with disastrous consequences. On the opening day of school in Beslan, a town in the North Caucasus, militants took over a school, taking more than 1,000 people, three-quarters of them children, hostage.

The militants’ demand was, once again, independence for Chechnya. The standoff continued for three days, ending when Russian forces stormed the building.

Once again, Russian forces were criticized for their handling of the situation. Even Putin took a hit, with his approval rating dipping merely from 68 percent in August to 66 percent after the crisis.

A memorial at the Dubrovka Theater in Moscow, where Chechen commandos took hostages during the "Nord-Ost" musical production in October 2002. (Yuri Kadobnov/AFP/Getty Images)

Prohibited from running for a third consecutive term by Russia’s constitution, in March 2008 Putin ceded the top spot to his hand-picked successor, Dmitry Medvedev. Putin made sure in advance to beef up the position of prime minister, which he assumed.

But who are we kidding? The real power never left that judo grip.

Russian soldiers ride past a burnt-out Georgian tank in the South Ossetia town of Tskhinvali in August 2008. (Dmitry Kostyukov/AFP/Getty Images)

In August 2008, tensions rose over Abkhazia and South Ossetia, two breakaway regions that had declared their independence from Georgia. Georgian President Mikheil Saakashvili began shelling the Ossetian capital, Tskhinvali, in what he claimed was retaliation for a Russian attack.

Moscow sent in troops, a five-day war ensued, and as a result South Ossetia and Abkhazia remain disputed, but nominally independent, territories.

This was, technically, a crisis for newly inaugurated Russian President Dmitry Medvedev, who later told reporters in 2009 that sending in troops had been “absolutely the most difficult decision I’ve ever had to make.”

Actually, to no one’s surprise, PM Putin — who was away in Beijing when the order to go into Georgia was issued — was responsible for the decision.

7. Protests on the streets of Moscow

In December 2011, things started getting dicey. Parliamentary elections had returned a large majority for Putin’s party, United Russia, and Putin himself had announced his intention to run again for president in 2012. Tens of thousands turned out to demonstrate for fair elections, in what some observers termed the “Snow Revolution.”

Protests erupted again in May 2012, the day before Putin’s third inauguration.

As a result, more than 400 people were detained and 30 were charged. To date, seven have been tried and sentenced, in a case that continues to ripple through Russia’s opposition.

On Feb. 21, the feminist punk rock band Pussy Riot took the altar during a service at Moscow’s Christ the Savior Cathedral. Their performance of their immortal work “A Punk Prayer,” whose refrain was “Holy Mother, get rid of Putin,” did not last long: Within seconds, security officials had tossed them out. By March three of them had been arrested; they were later put on trial and convicted of “hooliganism” driven by religious hatred. Each was sentenced to two years in prison, although one was later released after an appeal.

The case caused an uproar abroad, where Amnesty International designated the women prisoners of conscience. But back home, Russians were not as fond of the band. In July 2012 fully one-third of all Russians, according to one poll, thought the women had received a just punishment for their actions.

The Olympics were to be Putin’s crowning achievement, a demonstration of Russian talent and power. In fact, the event very nearly became a $50-billion public relations disaster.

Journalists complained that some hotel rooms were minus hot water, shower curtains, and even doorknobs.

The games went off more or less smoothly, however, with a spectacular opening ceremony.

Putin even released the Pussy Riot women for the event, who promptly paid him back by staging an anti-Olympics protest in downtown Sochi.

Russia cleaned up in the honors department, beating out all opposition for a total of 33 medals.

In fact, there was only one thing marring the victory ….

As Putin was reveling in quasi-triumph, Ukraine was rapidly falling apart.

Protests began in Kyiv in November, when President Viktor Yanukovich canceled a proposed deal with the European Union and opted for closer ties with Russia.

Tension mounted through December and January, and came to a head in February — just when the eyes of the world were on Sochi.

What followed was either a triumph of people’s democracy or a fascist coup, depending on one’s point of view. The protesters from Kyiv’s Maidan Square took control, set up a government, and began to put things back together. Or try to, at least.

Crimea, a part of Ukraine where the Russian navy just happened to be based, decided it would rather be with Russia. In March the peninsula held a referendum that was either an exercise in a nation’s right to self-determination or a shameless landgrab, depending, again, on one’s point of view.

Russia and its leader came in for a tsunami of criticism from abroad, and the United States and Europe levied economic sanctions to punish Putin.

At home, his popularity soared to the stratosphere, with fully 83 percent of Russians saying they approved of his performance.

Which brings us up to date. The Kyiv government is now fighting a bitter war with separatists from eastern Ukraine, who have proclaimed independence. On July 17, a Malaysian airliner was shot down over eastern Ukraine, killing all 298 people on board.

US intelligence says the most likely explanation is that rebels fired a Russian-made anti-aircraft weapon at the plane, bringing it down by mistake.

The world will bluster, condemn, and levy more sanctions. There was even an abortive attempt to strip Russia of the 2018 World Cup.

One more crisis, and Putin’s popularity could top 100 percent.

Jean MacKenzie worked as a journalist in Russia and other parts of the former Soviet Union for more than a decade. Her stories from the time have appeared in The Boston Globe, the Christian Science Monitor, Newsday and many other publications.

More from GlobalPost: Putin doesn't look like he's about to give in