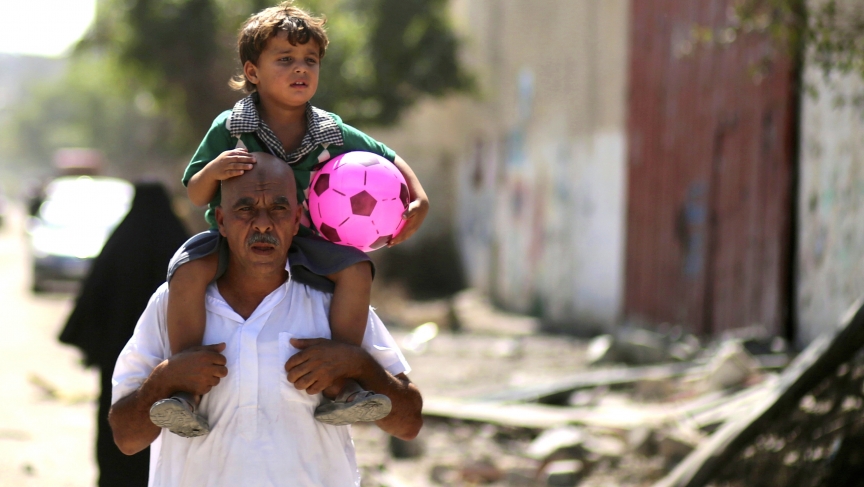 A Palestinian carries his son in the eastern Gaza City neighborhood of Shejaiya, which witnesses said was heavily hit by Israeli shelling and air strikes during an Israeli offensive. (August 1, 2014)
Credit:

When news broke that Israel and Hamas had agreed to a 72-hour ceasefire, people in the Gaza Strip can be forgiven for thinking this was it. The diplomats would now have a window of opportunity to secure a longer-term truce and Palestinians could start to breathe more easily than they had in nearly a month.

They could start putting their lives back together. But it didn't happen.

The ceasefire fell apart in a matter of a few hours when the shooting started up again, along with rocket launches and airstrikes. The Israel Defense Forces soon announced that one of its soldiers had been captured. And that's when a deeper sense of dread began to set in for people in Gaza.

“This place is coming apart at the seams,” said Nicholas Casey of the Wall Street Journal, speaking from Gaza City. “We as reporters, along with everybody else in Gaza, thought that this was going to be the end.”

Casey said people left their homes on Friday morning to get food, water and supplies. Fishing boats went back out and beach goers could be seen again. But then, Casey said, came the familiar sounds of Israeli shelling and the sight of Palestinian rockets flying toward Israel.

“It was clear that the ceasefire wasn't really a ceasefire,” Casey said. Then, there was more news to worry about. “The fact now that there's an Israeli soldier in Hamas's hands potentially, doesn't really bode well for the civilians here."

With some 1,400 Palestinians dead at this point, Casey said most people he speaks with in Gaza seem to know somebody who's been killed. There is a sense of fear and uncertainty, he said, that's been building over time since Casey arrived in the Gaza Strip almost three weeks ago.

“Now, there's no electricity,” Casey said. “No one has refrigeration anymore. Sewage is overflowing here because the pumps aren't working. And there's no water for almost anybody in Gaza at this point, because the water pumps mainly are on the other side of the Israeli lines, the part that Israel has taken now and is using to try and clear out the tunnels, that's also where the water pumps are.”

Speaking to reporters at the White House on Friday, President Barack Obama said “Hamas and the Palestinian factions” were responsible for killing two Israeli soldiers and capturing a third soldier, “almost minutes after the ceasefire was announced.”

“If they are serious about trying to resolve this situation, that soldier needs to be unconditionally released as soon as possible,” Obama said.

The president reiterated his support for Israel's right to defend itself, but added, "at the same time, we have also been clear that innocent civilians in Gaza caught in the crossfire have to weigh on our conscience and we have to do more to protect them."

Obama said the United States would continue to work toward putting a stop to the violence. But he added, “I think it's going to be very hard to put a ceasefire back together again if Israelis and the international community can't feel confident that Hamas can follow through.”