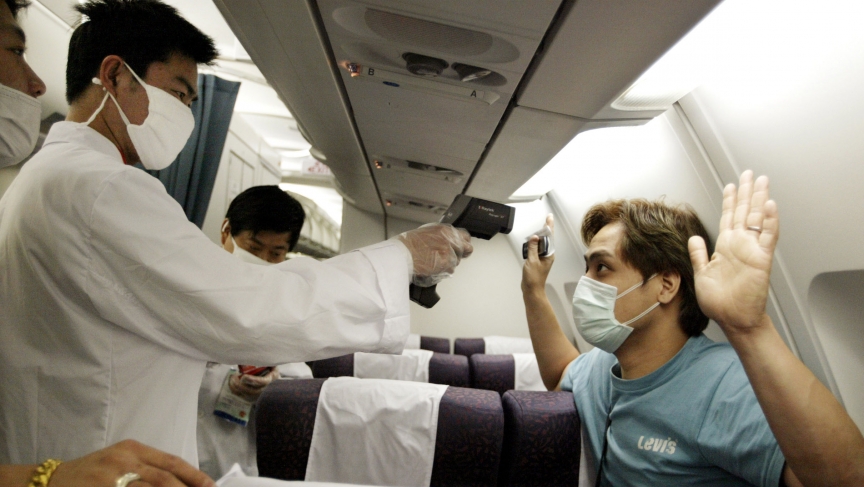 A Chinese doctor checks the temperature of a passenger on a flight from Hong Kong to Shanghai during the SARS outbreak in 2003. There are now fears that Ebola could spread via travel from West Africa to the rest of the world.
Credit:

The current Ebola outbreak in West Africa isn't the first one the world has faced. But while there have been several outbreaks since the virus was first recognized in 1976, this one is different.

There are the sheer numbers: It's the largest ever recorded, with more than 700 deaths, more than 1300 infected people and cases recorded in four countries.

And that's not all. "What we have here now is a multi-country outbreak, which is not only tucked away in rural areas, but has now been in cities," explains Dr. Anthony Fauci, who directs the National Institute of Allergy and Infectious Diseases at the National Institutes of Health, "so the capability of this spreading in a much more aggressive way — we’re actually witnessing that."

Could Ebola even spread to the United States? The death of Patrick Sawyer, a Liberian American from Minnesota, stoked fears that the disease could cross the ocean. Sawyer died earlier this week in Nigeria after flying there from Liberia, and was reportedly planning to travel back to the US in August.

The US government has even begun taking precautions against the spread of the virus. On Thursday, the US Centers for Disease Control and Prevention issued a travel alert against non-essential travel to Liberia, Sierra Leone and Guinea. The Peace Corps has begun evacuating volunteers in the affected countries.

But Fauci says the spread of Ebola isn't that simple. The current outbreak has a lot to do with underdeveloped health care infrastructure in the three most-affected countries — Liberia, Sierra Leone and Guinea. "The conditions that allow for an outbreak like we’re seeing in the African countries are solely related to the lack of the ability to handle patients in an isolated way with the proper equipment,” he says.

So while an infected person could easily board a plane for the US, the probability of an outbreak on this scale in the United States is very low. There's enough medical knowledge and facilities to cope.