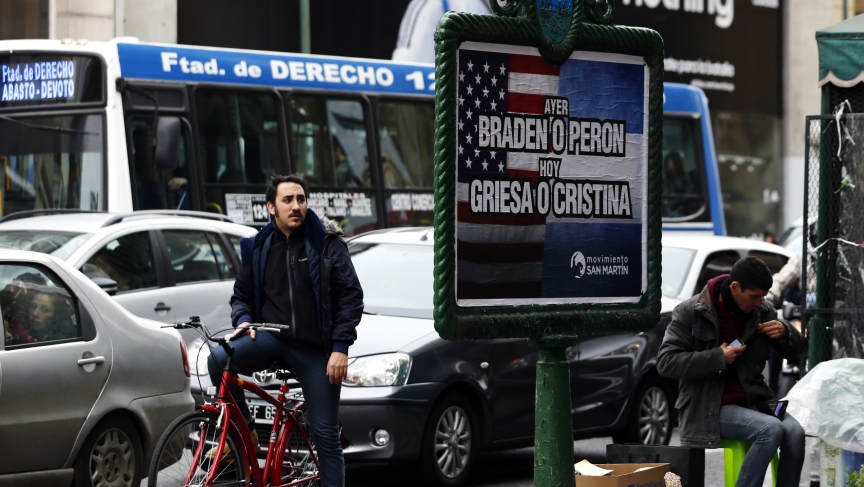 A man looks at a poster placed on an advertising board that reads "Yesterday, Braden or Peron - Today: Griesa or Cristina", in Buenos Aires on July 29, 2014. Argentine debt negotiators held talks in New York on Tuesday with the U.S. mediator in the South American country's battle with holdout investors, in a last-ditch attempt to avert a default.
Credit:

You could say that Argentina is in a fight for its financial future — again.

On Wednesday, the country defaulted on its debt for the second time in 13 years. It's a bit like missing a credit payment, just one that costs billions of dollars and could potentially affect the lives of 41 million Argentinians.

So how did Argentina get here? After the country defaulted on its previous debts in 2001, it managed to strike new, refinanced deals with most of its creditors — but not all of them. Those holdouts demanded every dollar of the money they were owed, and US courts agreed. A New York judge said Argentina couldn't pay back any of its refinanced deals until it gave the holdouts their cash, something the country can't afford.

The talks between the holdouts — American hedge funds — and Argentina were ordered by a judge in New York, but the negotiations broke down, essentially forcing Argentina to default all over again on its refinanced debts. Axel Kicillof, Argentina's economy minister, has compared the negotiations to extortion.

Veronica Smink, a BBC reporter in Buenos, Aires says that just the word "default" brings back a lot of painful memories for Argentines. "A lot of people remember the situation in 2001 when Argentina defaulted on its sovereign debt, when there were very high levels of unemployment and of poverty," Smink says. Now they're afraid another default will exacerbate the country's already-serious economic problems.

"People here in Argentina are concerned because a default could mean a worse recession," Sminks says. "Also remember Argentina has one of the highest inflation rates in the world — estimated at between 35 percent and 40 percent — so people are really concerned that could worsen."

Argentina's president, Cristina Fernández de Kirchner, has downplayed the impact of this latest default. The move cuts off Argentina's ability to borrow money from American banks, but Fernández says that international credit markets have already been mostly closed to Argentina since 2001.

That may be true, but Smink says ordinary people aren't thinking about global credit so much as they are worried about how the default will affect their daily lives. "Especially, people worry that there could be job losses," she says. "Current unemployment rates are low, well under 10 percent, but people are concerned that it could be rising and heading back up to the levels of 2001, which were up around 25 percent"

Smink says the mood in Argentina shifted quickly as word spread that talks had broken down. "At first, people had a sense that there was going to be an agreement, so people were first surprised that no agreement came," she says. "Now today [Thursday] there is a sense generally of 'Oh my God, not another default!'"

But there is still a glimmer of hope that a debt deal may be struck: Argentina's default will come up at a court hearing in New York on Friday.