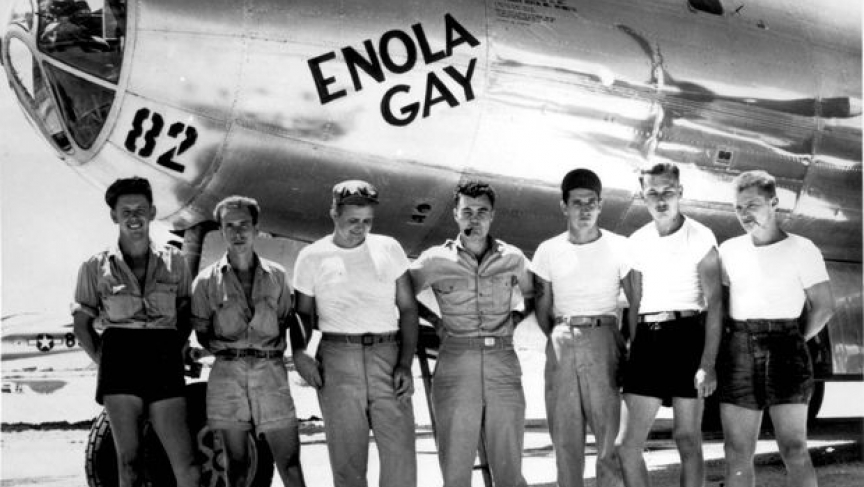 Crew members stand in front of the Enola Gay — the plane that dropped the first atomic bomb on Japan.
Credit:

The last member of the U.S. crew that dropped the atomic bomb on Hiroshima during World War II died earlier this week. Theodore Van Kirk was 93 years old.

At 24, Van Kirk was the navigator of the Enola Gay, a B-29 Superfortress that dropped the world’s first atomic bomb over the Japanese city of Hiroshima on August 6, 1945.

The bomb killed 140,000 people, and history tells us that the decision to drop the bomb was a game changer, ending the war and starting a big debate about the future use of nuclear bombs.

Suzanne Dietz, Van Kirk's biographer who chronicled his military life in the book, "My True Course," says Van Kirk saw the mission as simply part of his service in World War II.

According to Dietz, the US military had ordered 470,000 body bags for the planned land invasion of the Japanese home islands, which was known to be fraught with danger.

"It was not only saving American lives, but it saved Japanese lives," Dietz argues.  "It was something that he did as part of serving in World War II. ... He was a father, a contributor to society, working for DuPont for over 30 years. I don't think it was a focus of his life, but it was obviously part of who he was."

After Japan surrendered, Van Kirk returned to the country to meet with scientists and survey the damage. While he was there, he met a Japanese soldier who, upon returning from war, was devastated to find his home destroyed.

"It made him think: What if he were to come home and find his home in that kind of condition?" Dietz says. "It gave him empathy for who he looked at as the enemy."

This story first appeared as an interview from PRI's The Takeaway, a public radio program that invites you to join the American conversation.