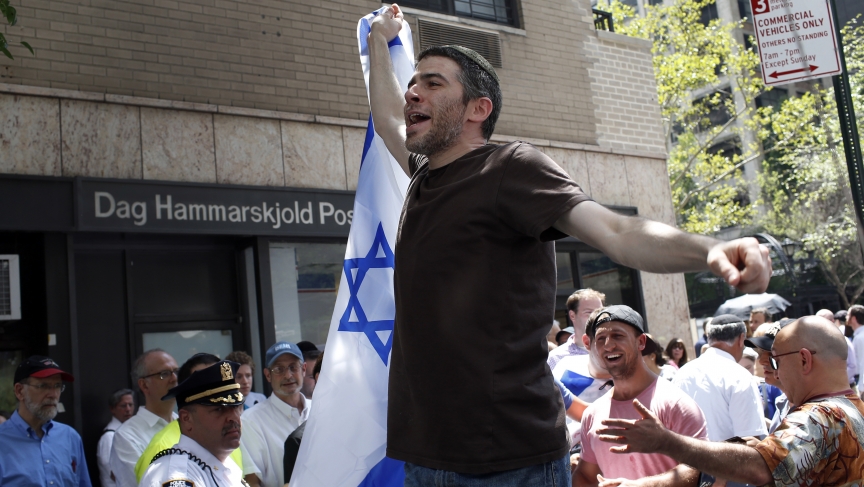 A man holds up an Israeli flag during a pro-Israel demonstration near the United Nations building in New York City, July 28, 2014.
Credit:

The White House appears to be changing its tune on the war in Gaza. During the early stages of the Israeli military campaign, the Obama administration focused squarely on the need for Israel to defend itself against steady rocket fire from Palestinian militants, including Gaza's Hamas rulers.

But on Thursday, the message took a different turn. The Pentagon said the conflict was killing and wounding too many Palestinian civilians. White House spokesman Josh Earnest said Israel's shelling of a United Nations school this week, “is totally unacceptable and totally indefensible.”

“We need our allies in Israel to do more to live up to high standards that they set for themselves,” Earnest said.

And the administration is not alone.

The MSNBC host and former Republican congressman Joe Scarborough, who describes himself as a huge Israel supporter, had some pretty harsh words about Israel's military campaign in Gaza.

“This continued killing of women and children in a way that appears to be indiscriminate is asinine,” he said. Scarborough added that the offensive in Gaza is bad for both Israel and the United States.

What about American Jews, who are understandably among the most consistent US supporters of the State of Israel? How are they feeling about this latest Gaza war?

The war has certainly stirred up strong feelings on both sides, which was apparent during rallies — both for and against Israel's military campaign — held in New York.

“It's polarizing American Jews along ideological lines, but also very much along generational lines,” says Peter Beinart. He's the author of “The Crisis of Zionism” and a columnist for the Israeli newspaper, Ha'aretz.

Beinart says the generational divide in the US Jewish community has emerged over the last several years, but “this war is laying it bare.” In general, Beinart says younger Jews tend to be far more willing to question Israeli government policies — and do so publicly — than their parents' generation.

“Older American Jews are more likely to start with the assumption that the Palestinians have never accepted Israel,” Beinart explains. “And that Hamas is a particularly virulent expression of that.”

Members of this generation see rising anti-Semitism in Europe as simply the latest example of how the State of Israel is under assault, Beinart says. And it strengthens their conviction to stand behind Israel even if they don't necessarily agree with all of the current government's policies.

“That is particularly resonant for people who, in their own lives, may remember things like 1948 [Israel's war of independence] and 1967 [its Six Day War], may have had personal experiences of anti-Semitism in the 20th century,” Beinart says.

Younger American Jews, he says, “they may not reject all of that, but they may be more likely to start with the more universalistic assumption that the Palestinians are not all that different from us. And that the Palestinians have been living without some of the basic rights that we would want ourselves.”

This group tends to be more willing to question Israeli government policy, Beinart says. “Is Israel really treating the Palestinians fairly? Is Israel's blockade of Gaza really entirely justified? Can Israel justify all of these civilian casualties, even if it's only going after Hamas?”

A recent poll conducted by the Pew Research Center measuring the broader American public's attitude found that twice as many respondents held Hamas (40 percent) responsible for the current violence as they did Israel (19 percent). But the findings for respondents below the age of 30 are striking. Among those between the age of 18 and 29, nearly a third (29 percent) said Israel is most responsible for the current violence compared with 21 percent who blamed Hamas.

Beinart says it's unlikely that this Gaza war will amount to a turning point in American Jewish attitudes toward Israel. “But I think there is a longer term transition and this is one moment in that transition,” he says. “It is a transition to a younger generation of American Jews who, first of all, don't see Israel as a refuge from anti-Semitism in the way their parents may have.”

“Secondly, they are more likely to see Israel — and Jews more generally — as a powerful and privileged community, rather than a weak and menaced community. And thirdly,” he adds, members of this group, “are less likely to feel that criticism has to be kept 'in-house.'”