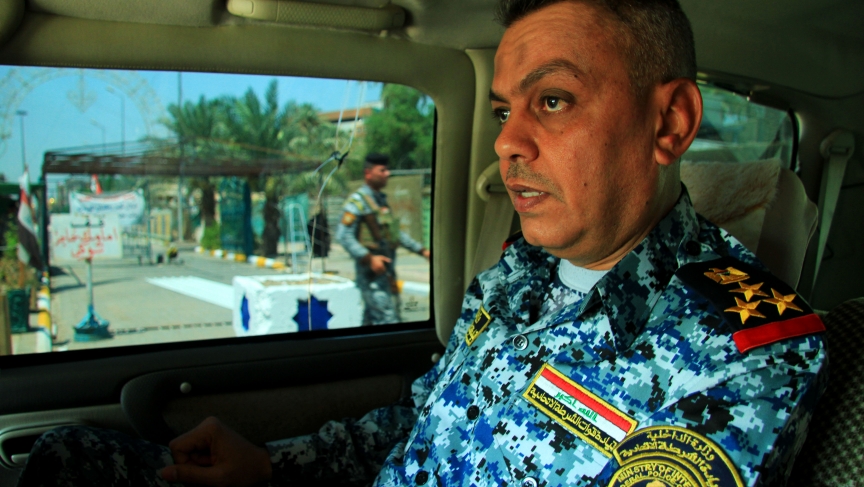 General Malik Maliki of the Eighth division of Iraq's Federal Police patrols on the outskirts of the mostly Shia neighborhood of Khadamiya in north Baghdad. At a checkpoint not far from here, just hours before his visit, a suicide car bomb attack killed two of his men. With violence on the rise in the Iraqi capital, Maliki admits he'll likely lose more officers to similar attacks.
Credit:

Baghdad's police have their hands full these days, especially the eighth division of the federal police. They're responsible for Khadimiya, a Shia neighborhood home to a revered shrine in North Baghdad.

Khadimiya has been repeatedly targeted by car bombings in recent weeks. The group that has taken responsibility for these attacks is the Islamic State — the same Sunni extremist group that’s seized control of Mosul and Tikrit in the north. They’ve been staging isolated attacks inside Baghdad, targeting busy markets and Shia holy sites — anywhere they can exact high civilian casualties.

General Malik Maliki (no direct relation to Prime Minister Nouri al-Maliki), of the federal police that patrols this area says just in the space of three days, he's lost ten of his men.

Two were killed at this checkpoint just hours before our visit. The wall behind us bears fresh shrapnel scars and dried blood. The general admits that without specific intelligence on when a car bomb is coming and where, the best his forces can do is to try to prevent one from getting past the checkpoints into crowded markets or Shia holy sites.

Even before Mosul fell, this police unit wasn't doing standard police work, like pulling over speeding drivers. They were breaking up terrorist cells. Now with the larger, more imminent threat, the unit is more stretched.

Outside the brigade's base — known as Camp Cooke when it was used by American troops — a scruffy batch of new volunteers is waiting to be processed. They're all in civilian clothes; some are wearing sandals. They'll enter a two-week police training program before being sent to man checkpoints and patrol streets in the most dangerous part of town: the district's northern edge.

Inside the main building, the walls are lined with pictures of the division's "martyrs" — men killed in the line of duty. An officer points to a panel further down the hall listing 62 names. It's full now; no more space for the men killed just the night before.

An officer tells me they're planning to put up another board.

Susannah George's reporting from Baghdad is part of our partnership with Global Post.