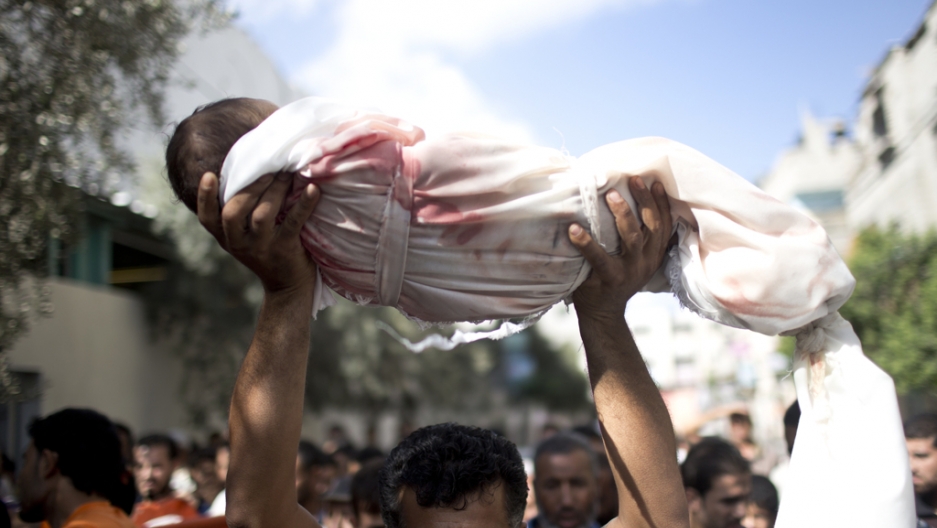 A Palestinian man carries the body of a one-year-old baby Noha Mesleh, who died of wounds sustained after a UN school in Beit Hanun was hit by an Israeli tank shell, during her funeral in Beit Lahia, northern Gaza Strip, on July 25, 2014. Fifteen people were killed when Israeli fire hit a UN-run school in Gaza, raising the Palestinian toll on the 17th day of the conflict to 777, medics said. AFP PHOTO/ MAHMUD HAMS (Photo credit should read MAHMUD HAMS/AFP/Getty Images)
Credit: MAHMUD HAMS
Share

LIMA, Peru and JERUSALEM — Latin American nations are expressing their revulsion at the bloodshed in Gaza — and squarely pinning the blame on Israel.

Chile, Peru and El Salvador said this week they are recalling their ambassadors from Israel for consultation. That was after Ecuador and Brazil did the same last week.

Lots of world leaders have denounced the violence on both sides of Israel’s 3-week-old war against Hamas in Gaza. Palestinian casualties have reached 1,328, according to Gaza health authorities, while the Israeli death toll is close to 60.

But the Latin Americans appear to be leading a diplomatic storm, flying envoys out of Tel Aviv.

Recalling an ambassador for consultation falls short of breaking off relations outright, but it can lead to that.

So, why are they doing it?

In a statement on Tuesday, Chile condemned Hamas for launching rockets at Israeli towns, but slammed the Israel Defense Forces’ bombardment of Palestinian civilians.

“The Israeli military operations in Gaza … do not respect the fundamental norms of international humanitarian law, as is demonstrated by the more than 1,000 civilian victims, including women and children, as well as the attack on schools and hospitals,” the Chilean statement said.

Brazilian President Dilma Rousseff described the Israeli offensive as a “massacre” and accused the government in Tel Aviv of responding “disproportionately” to Hamas violence.

“El Salvador, Chile and Peru would have been much better advised to promote the international move intended to assist Israel in its efforts to defend innocent civilians and instate a durable ceasefire with the demilitarization of Gaza,” Israel’s Foreign Ministry said in a statement.

Privately, a senior Israeli official told GlobalPost, “They are all very far away and don't really know what is going on, and Brazil, for its own reasons, is pressuring them. Our situation doesn’t really have any effect on them, and their action, it goes without saying, has no effect on our region.”

The moves to recall ambassadors “are motivated by foreign and domestic policies,” said a Latin American diplomat, who spoke on condition of anonymity because of the delicate nature of the issue.

He said the leftist governments of Bolivia, Cuba and Venezuela would have followed suit — if they had any ambassadors in Israel to pull out.

Many Latin American nations, particularly Venezuela and Chile, have Palestinian communities. However, there are also Jewish communities in almost every nation in the region, in some cases huge ones, such as in Argentina.

And Israel is an eager trading partner, with Prime Minister Benjamin Netanyahu this year launching plans to increase commerce with the region.

But media in Latin America have also shown graphic images of dead and dying Palestinians in a way that their US counterparts usually avoid.

More from GlobalPost: These are the images from Gaza that are too graphic for many US news outlets to publish

“It remains to be seen how long these consultations will last, that they don’t end up removing their ambassadors indefinitely,” the diplomat said.

He questioned why they’d do this in Israel and not in other problem countries like Russia, Iran or Syria.

Arnoldo Kraus, a surgeon and columnist in Mexican newspaper El Universal, summed up many Latin Americans’ views on Israel-Palestine when he condemned Hamas but described Israel’s treatment of the Arabs as “racist” and the Jewish settlements on Palestinian land as “nauseating.”

He added: “The pictures of dead children horrify. … It’s impossible not to feel compassion for the suffering of the Palestinians and disdain towards the Israeli army.”