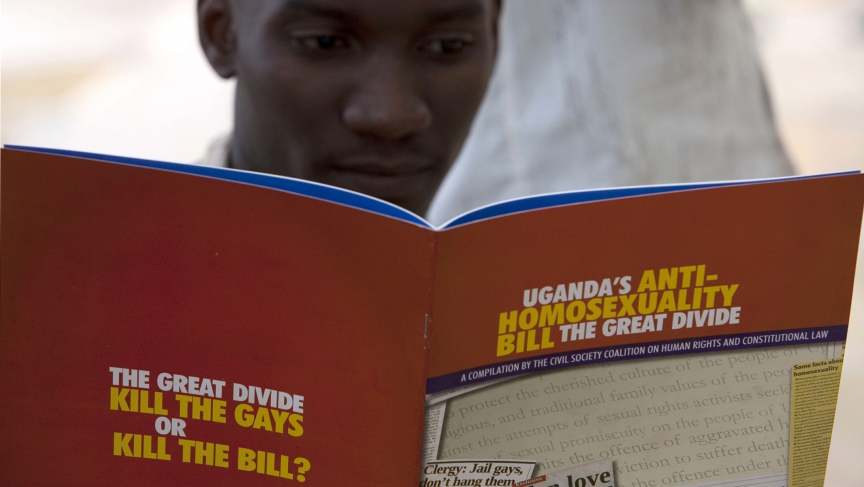 A man reads a publication by a civil society coalition on human rights and constitutional law in Kampala.
Credit:

The Anti-Homosexuality Act, Uganda's notorious anti-gay law that earned worldwide attention when it became law in December, may soon be repealed.

The act criminalizes sex between LGBT Ugandans, even if it takes place outside of Uganda. It was once known as the "Kill The Gays Bill" before the death penalty was removed, but it still threatens life in jail. And the act even applies to people who so much as promote gay rights.

But now the law is being challenged in the constitutional court in Kampala, Uganda's capital.

When the law was enacted back in December, there was controversy over parliamentary technicalities. The speaker of Uganda's parliament called for a vote on the law while ignoring a quorum call, which summons absent members to come vote. Opponents of the law argue it was therefore passed without a true quorum of lawmakers, and the trial will address that issue first.

“When the arguments began today, the first question the court took up was whether the law was lawfully passed in the first place,” says Lester Feder, who has been covering the news out of Uganda for BuzzFeed.

The court is scheduled to resume hearings about the law on Thursday morning, and Feder says LGBT activist are encouraged by the proceedings so far.

According to Feder, anti-gay sentiment wasn't even a notable feature of Ugandan society — until religious leaders and anti-gay activists met with American anti-gay activists from the evangelical Christian community. “That kind of catalysed what was not a major issue in Uganda into something that became a very prominent political issue,” Feder says.

But if the Anti-Homosexuality Act is overturned, it wouldn't be the first victory for LGBT rights in the Ugandan courts.

In 2006, transgender activist Victor Mukasa sued the Ugandan attorney general after his house was raided by the government. The court ruled in favor of Mukasa. Another LGBT activist, David Kato, succesfully sued Ugandan tabloid Rolling Stone for running stories that outed gay Ugandans. Sadly, after winning his lawsuit, Kato was murdered.

There have also been rulings in favor of LGBT rights in other countries in Africa. Courts in Kenya recently ruled in favor of a transgender group that was denied its right to register with the government because its members' female names didn’t match their male birth names.

“That’s a very encouraging sign for LGBT activists," Feder says. "The courts might still be a good avenue for protecting LGBT rights, even as the political systems seem to be growing increasingly hostile."