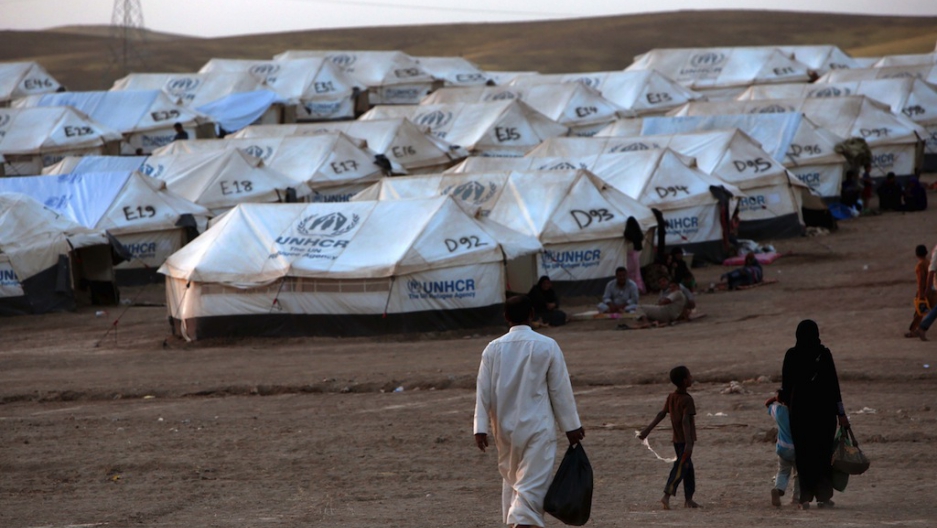 An Iraqi family fleeing violence in the northern city of Tal Afar, arrive at the Kurdish checkpoint in Aski kalak, 40 km West of Arbil, in the autonomous Kurdistan region, on July 1, 2014. Saudi Arabia pledged $500 million in humanitarian aid for Iraq to be disbursed through the United Nations to those in need regardless of sect or ethnicity, state media reported.
Credit: SAFIN HAMED
Share

The crises are not only large-scale, affecting millions, but the conflicts also are complex, each with unique political realities and on-the-ground difficulties.

They are not alone among crises competing for our attention. They are simply the biggest, pushing off the front pages other crises where human needs remain urgent: Darfur, Central America, Pakistan, Côte d’Ivoire, Democratic Republic of the Congo, Somalia.

Kristalina Georgieva, EU Commissioner for International Cooperation, Humanitarian Aid and Crisis Response, warns that there is “no light at the end of this tunnel: we must get used to a ‘new normal,’ where we face multiple challenges with finite resources.” We need to accept the reality of not having enough money to respond.

With so many crises, the tendency is to focus on the latest and the “biggest” crises. A “crisis of the month” mentality has been replaced by “crisis of the week.”

Even when a crisis isn’t resolved — as in long-standing displacement in Colombia or reconstruction in Haiti — the demands of responding to new situations tend to overshadow on-going crises.

Numbers matter, so understandably our focus is drawn to large-scale crises. When hundreds of thousands of refugees flee a country, we respond. When smaller numbers are displaced by, say, a storm on a Pacific Island – even when proportionally a greater percentage of the population is affected — we tend to overlook it.

A few years ago the International Federation of the Red Cross and Red Crescent Societies reported that 90 percent of all natural disasters have fewer than 50 casualties; numbers not sufficient to mobilize an international response but no less devastating to those affected.

We also tend to focus on crises that are visible. I was in Central America a couple of weeks ago looking at displacement caused by what are called “new forms of organized violence.” While the story in the US is about the +50,000 unaccompanied Central American children on the US-Mexico border, the real crisis is in Central America.

But as there are no reliable estimates of the number of people displaced or affected by criminal violence, the story doesn’t attract the attention it deserves.

Even in a high-visibility crisis such as Syria, we focus on those we can access. My guess is that at least 20 news stories have been published on Syrian refugees for every story about Syrians displaced within their country. Yet there are 6.5 million internally displaced persons compared to 2.5 million refugees.

Too many crises have consequences. In 2012 the worry was how the international community would come up with the resources to meet humanitarian needs in Syria, estimated at $1 billion a year. Today, the appeal for Syria is over $6 billion with less than 25 percent funded by mid-year.

Syria is far from the only crisis for which urgent appeals for funding are made. South Sudan, Central African Republic and Gaza are all desperate situations that need a robust international response.

Where are the donors getting the money? Are they raising new funds or are they diverting funds from other emergencies or from long-term development programs? And what does it mean for the refugees or the disaster-affected communities when the appeals are only 25 percent or 6 percent funded?

Too many crises also increase the demand for experienced staff. Humanitarian agencies find it daunting to maintain adequate stand-by capacity to respond to a wave of major disasters. Stand-by rosters are stretched.

International agencies compensate by either reassigning experienced staff from one emergency to another or hire new staff. Both options have consequences.

Reassigning staff from, say, Iraq to Central African Republic or from Pakistan to Lebanon may meet immediate needs but such deployments are usually temporary, giving rise to rapid turnover. What suffers is knowledge of the local situation and relations with local actors, both critical factors.

Still another cost is failing to address potential crises In spite of the work done to establish early warning systems.

The system is simply too stretched to respond adequately to simmering situations, places such as Venezuela and Nigeria where ominous signs of trouble are brewing.

An overwhelming number of crises make it almost impossible for the international community to respond well — or even adequately — to the existing humanitarian disasters, much less to prepare for future ones.

Humanitarian crises are influenced by political problems; the inability of our international political system to resolve these crises is stunning. The Responsibility to Protect populations from genocide, war crimes, crimes against humanity and ethnic cleansing has emerged as an important global principle since its adoption by the UN World Summit in 2005. The fact that there are too many humanitarian crises today is the result of a failure in global governance.

Change is needed in the international humanitarian system and perhaps the World Humanitarian Summit in Istanbul in 2016 will provide an opportunity for fresh — and even radical — thinking about the way the system responds.

Elizabeth Ferris is the co-director of the Brookings-LSE Project on Internal Displacement and a senior fellow in foreign policy, where her work encompasses a wide range of issues related to internal displacement, humanitarian action, natural disasters and climate change.