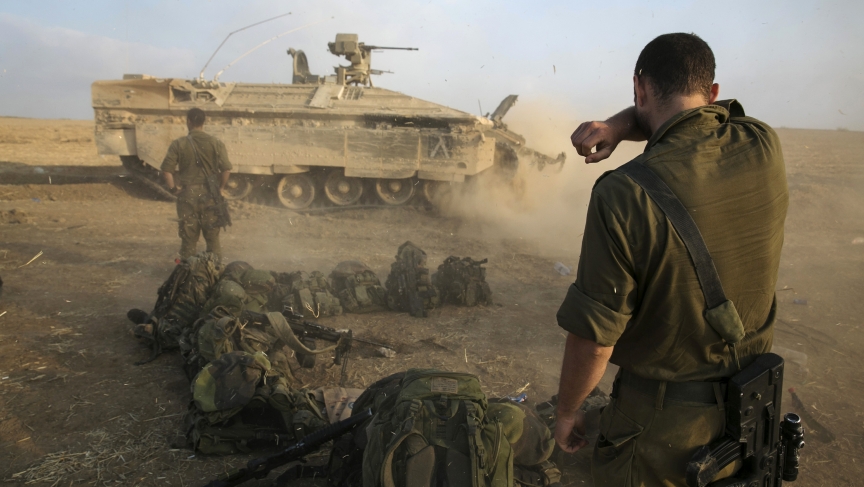 An Israeli soldier stands at a staging area after crossing back into Israel from Gaza on July 28, 2014.
Credit:

Three weeks ago, Israel's goal in Gaza was “Quiet for quiet.”

Last week: The war will continue until the tunnels are destroyed, a task which should largely be completed within “two or three days.”

Monday: Yuval Steinitz, the intelligence minister, told reporters that the bombing would continue until the international community agrees to “disarm” Hamas and other groups:

“If we want a real comprehensive solution, that will bring not just an end to the current round of violence, but real relief for people on both sides of the fence … you have to demilitarize Gaza, as it was supposed to be.”

The three-week-old Israeli offensive in Gaza, which has killed nearly 1,100 Palestinians and wounded more than 6,500, is a war in search of an objective. Perhaps more accurately: it is an open-ended military campaign yoked to the ever-more-difficult political objective of sustaining an unsustainable status quo.

At first, Prime Minister Benjamin Netanyahu spoke only of the rockets, which continue to this day, albeit in lesser numbers. Three civilians have been killed by more than 2,500 projectiles launched from Gaza this month. He wanted a rerun of 2012, when a week of heavy bombing and a diplomatic push by the Egyptian government brought a quick end to Operation Pillar of Defense.

Unlike 2012, though, Hamas wasn’t interested in an unconditional truce. It had demands — reasonable ones, Palestinians agreed, like lifting the years-old siege of the strip.

Netanyahu was not interested in easing the blockade. Nor was the army-backed government in Cairo, which has contributed to the stranglehold by destroying hundreds of smuggling tunnels into Gaza. A half-hearted Egyptian attempt at an unconditional ceasefire collapsed; the war grew.

So the rationale became “terror tunnels,” through which gunmen have tried to infiltrate southern Israel six times this month. They are an “existential threat,” the head of the southern command told reporters; Yediot Aharonot, an Israeli newspaper, warned starkly that Hamas planned to sneak a force of 200 gunmen into Israel and seize control of a kibbutz on Rosh Hashanah.

“Most” of the tunnels were meant to be destroyed within a few days, defense minister Moshe Ya’alon said last week. The army says it has identified more than 30, and destroyed nine of them.

But the Israeli government has known about this threat for years, and did nothing about it. The Egyptian cease-fire, which Netanyahu eagerly accepted, would have left the tunnels intact—an existential threat which, apparently, the prime minister was content to live with. Steinitz danced around the issue on Monday:

"We are never willing to accept that terrorists are digging tunnels into our territory ... they were a threat even before, but it’s not always the case that if we have some threats we decide to go immediately to a big ground operation in order to neutralize it."

Still, there was no ceasefire; Hamas held to its demands. “Lifting the siege, this is the minimum,” Hamas leader Khaled Meshaal told reporters in Doha last week.

Thus the war widened again, with hundreds of thousands of civilians told to leave their homes in eastern Gaza for the ever-shrinking “safe space” — not that anywhere is truly safe.

Israel has launched a remarkable campaign against US Secretary of State John Kerry, accusing him of betrayal for demanding a ceasefire almost identical to the Egyptian one they accepted earlier this month. “A strategic terrorist attack” was the surreal term used by one “very senior” official to describe Kerry’s plan. The talks are frozen. The bombing continues, with overwhelming public support.

The military is playing its assigned role — targeting the rockets, then the tunnels. But rockets can be rebuilt, tunnels re-dug.

So the talk has turned to disarming Hamas, with aspirational chatter about putting the Palestinian Authority in charge of Gaza. No one can articulate how this is meant to happen. “Like asking a priest to convert to Judaism,” quipped Amos Yadlin, a former head of military intelligence.

Ironically, the latter started to happen this spring, when a bankrupt and friendless Hamas signed a unity pact with Fatah and began relinquishing control of the government in Gaza. The group was isolated, weak, unpopular.

Netanyahu refused to accept the deal, which gave the Palestinians diplomatic momentum and a united front. It upset the status quo. It might have created pressure to actually resolve “the Palestinian issue.”

Today, everyone is back to their usual roles. Israel is fighting one of its lopsided, biannual wars. Hamas is an intractable enemy to be destroyed, rather than a party to the Palestinian government. Gaza has no solution, a problem to be contained. The Palestinian Authority is feckless and marginalized.

That is the goal, left unsaid beneath all the wartime speeches and military briefings. But it can only be achieved if all sides follow the script: By insisting that Israel remove the blockade, Hamas has left Netanyahu fumbling for an endgame.

A version of this column originally ran on Medium, a blogging site.