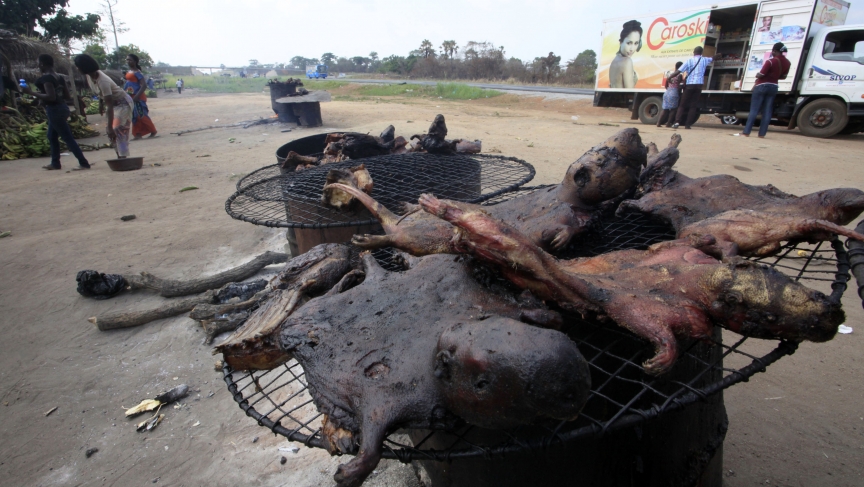 People walk near dried bushmeat near a road of the Yamoussoukro highway March 29, 2014. Bushmeat — from bats to antelopes, squirrels, porcupines and monkeys — has long held pride of place on family menus in West and Central Africa, whether stewed, smoked or roasted. Experts who have studied the Ebola virus from its discovery in 1976 say its suspected origin - what they call the reservoir host - is forest bats. Links have also been made to the carcasses of freshly slaughtered animals consumed as bushmeat.
Credit:

More than half of Liberia's forests have been sold for logging in recent years — and that's had a surprising impact on public health, researchers suspect. When those forests are cut down, animals, especially bats, are forced to find new habitat.

Often that habitat is people's homes — putting people in that country in close contact with the animals suspected of carrying Ebola. But that's not all. Researchers also suspect mining, which often puts humans deep in forests, contributes to human outbreaks of Ebola. Mother Jones looks at some of the other environmenta factors that may be contributing to the rapid spread of Ebola around Africa right now.

The conflict in Gaza rages on, with an ever-widening war costing hundreds of lives. The Telegraph has posted a time-lapse video, purported to be from a single hour on Saturday, when a Gaza neighborhood was reduced to rubble through a series of airstrikes.

The video, which was first aired on Saudi TV, illustrates the toll that civilian infrastructure is paying in the conflict between Hamas and the Israeli Defense Forces in the ongoing conflict. So far, there's been no sign that the two sides will agree to an enduring cease fire any time soon — with Hamas insisting on an end to the Gaza blockade Israel has enforced for years and Israel calling for a "complete disarmament of Hamas" under international supervision.

Ever wondered what it would be like to live on Mars?

Try Hawaii. That's right. A group of researchers, including one Canadian, recently spent four months living in a simulated Martian habitat, built on the side of a dormant Hawaiian volcano. The six individuals picked for the project had to rely on the same creature comforts that would be available to a Mars crew — manufactured air, space suits, even freeze-dried food.

The idea was to find out how the researchers would do psychologically with these conditions, especially how that would change over a course of a relatively long mission. PRI's The World talked to Canadian Ross Lockwood, a Ph.D. student who was among the six researchers. Don't miss the photos he took during his stay "on Mars."

Years of work have shifted the medical and scientific conversation in the US and Europe so that homosexuality is no longer viewed like an illness — nor treated as one. But in China, it often still is, which means practices like gay conversion therapy are still used. But that may finally be coming to an end, thanks to a court case challenging the legality of such "treatments."

The BBC talked to Xiao Zhen, the man behind the case, who endured gay conversion therapy himself — at his own hand. He did it to gather the evidence he would need for his lawsuit. Gay rights activists are also using protests and demonstrations to convince the medical community that gay conversion therapy is a crock, but this court case could provide the most dramatic, quickest change.

Chocolate fans, your prices are going up

PRI's The Takeaway looks at a decision by Mars and Hershey to raise their prices seven to eight percent in order to accommodate the increase in prices. If you're worried the higher prices will cut into your chocolate budget, they also have a suggestion to help you get more pleasure out of less chocolate: In short, let it melt in your mouth, rather than chomping it.

UNRWA rep Chris Gunness breaking down in tears on-air. We should all be brave enough to cry for #Gaza like him. http://t.co/HeH9ecP3de

With a tropical system battering the Marianas islands, another threatening to form over the Atlantic Ocean and threaten the Caribbean, it's already an active time of year for storms. But Japan is also on alert for a pair of tropical systems that could bring heavy rains and damaging winds to the island nation. Halong, which hit the Marianas, could slide northward, but a massive tropical low near Okinawa could also organize and soak the main part of Japan. The storm threat also extends to the Korean peninsula and northeast China, according to AccuWeather.