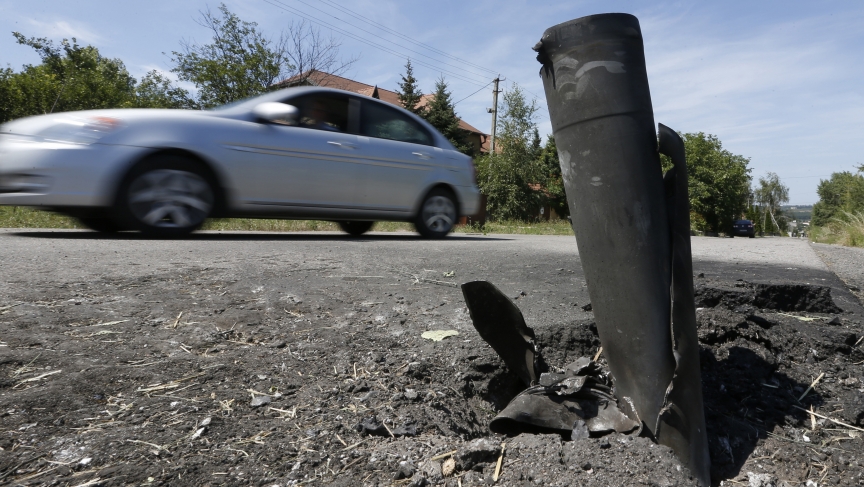 A car drives past the remains of spent ammunition near the suburbs of Donetsk, Tuesday. Intense fighting between Ukrainian troops and pro-Russian rebels in eastern Ukraine killed dozens of civilians, soldiers and rebels, as Kiev pressed on with an offensive.
Credit:

International investigators have again been blocked from getting to the site where Malaysia Airlines flight 17 came down almost two weeks ago. This time, it's fighting between Ukrainian government forces and pro-Russian separatists that's blocking the roads.

“The reason there’s fighting is because Ukraine’s president, Petro Poroshenko, launched an offensive on Sunday,” says Max Seddon, a reporter with BuzzFeed in the rebel-held city of Donetsk. Seddon points out that Sunday was the very day when 40 Dutch police officers arrived in Donetsk with the intention of heading out to the site to secure it for international investigators.

The Dutch police and the investigators have since been idle. Each day, says Seddon, “some of them will drive off toward the site. They see that it’s still blocked off and they go back. As far I can tell, the vast majority of them seem to spend the whole time sitting around the hotel eating club sandwiches.”

Ukraine denies launching an offensive, but Seddon says the facts on the ground refute that claim.

“It’s quite obvious that the real purpose of this offensive isn’t to secure the crash site," Seddon says. "That’s got to be a secondary concern, because it was perfectly easy to get to the crash site the entire time until they launched this offensive."

Instead, Ukrainian forces are trying to deal a major strategic defeat to the rebels. "The real point of this is that it completely cuts off Donetsk from the eastern half of the rebel held area, and also from the Russian border," Seddon says.

Seddon says the Kiev government is now “definitely on the front foot" in the conflict: “They have taken a large amount of territory in recent weeks, and there does not appear to be a way for the separatists to win militarily unless there’s some sort of drastic intervention by Russia.”

Seddon also cites alleged intercepts of conversations from the rebel prime minister, Alexander Borodai, in which he is supposed to have told a former senior official in Russia “that if the front didn’t shift dramatically in their favor in the next two weeks, then they won’t be able to hold out any longer.”