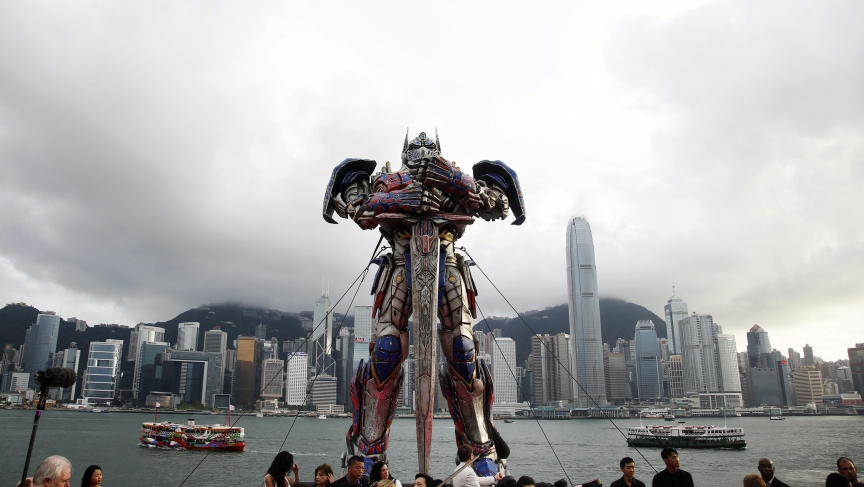 A 21-foot tall model of the Transformers character Optimus Prime is displayed on the red carpet before the world premiere of the film "Transformers: Age of Extinction" in Hong Kong.
Credit:

Technology is out of control. Democracy is hopeless. The world’s a mess. Sometimes it seems like good science fiction has to be grim.

“It's so easy to make money with a tale that says ‘civilization is garbage, our institutions will never be helpful, your neighbors are all useless sheep who could never be counted on in a crisis.’” says David Brin, a science fiction writer who thinks we've gotten way too fond of speculative technological bummers.

Movies like Blade Runner, The Matrix, Children of Men and, more recently, The Hunger Games and Divergent, all express some version of this dark world view.

Neal Stephenson, the author of Cryptonomicon, usually writes exactly those kinds of stories. In his fiction, he tends to explore the dark sides of technology. But a couple of years ago he got a public wake up call.

On stage at a conference, Stephenson was complaining, “there are no big scientific projects to inspire people these days," he said. But Michael Crow, the president of Arizona State, shot back, "You're the one slacking off." By "you," he meant science fiction writers.

When he thought about it, Stephenson had a strong realization: “Guilty as charged.”

“I'm kind of Exhibit A of this phenomenon,” he admits. “My best known books, Snow Crash and The Diamond Age, depict classical cyberpunk visions of the future that most people would recognize as dystopian.”

So are dystopias no longer cool? That's heresy in science fiction, but Stephenson is now a leading heretic.

He and Crow started the Center for Science and the Imagination at Arizona State. Stephenson also created another group called Project Hieroglyph, which recruits science fiction authors to write more optimistically about the future.

They're also hoping to give sci-fi writers a little rigor and realism, so that their ideas might be able to inspire real-world progress. "The general principles we laid down were: No hyperspace, no holocausts and no hackers,'" Stephenson explains.

Authors who approach Project Hieroglyph aren’t required to consult with real engineers and scientists, but “we think it’s cool if they do,” Stephenson says. “It suggests they're on the right track. ... It takes a lot of work to imagine in a constructive way. You're doing a kind of proto-engineering when you try to design a building or a city or a vehicle of the future that's innovative in some sense."

Some believe the entertainment industry can contribute more positively, as well. Commander Chris Hadfield, who served on the International Space Station, wants to see movie studios and game designers use their arsenal of special effects to depict fewer explosions and more realism, as in the Oscar-winning film "Gravity."

“What we do as astronauts all the time is simulate space flight,” Hadfield says. “We practice so that when we actually ... do a space walk or something complex, you're not numbed or overwhelmed by the difficulties and the complexity.”

Hadfield says the visualization capabilities now available through technology can even simulate walking around on Mars so well, that “maybe you don't have to trip over so many obstacles along the way .. That's the real stuff of dreams and that's where invention comes from."