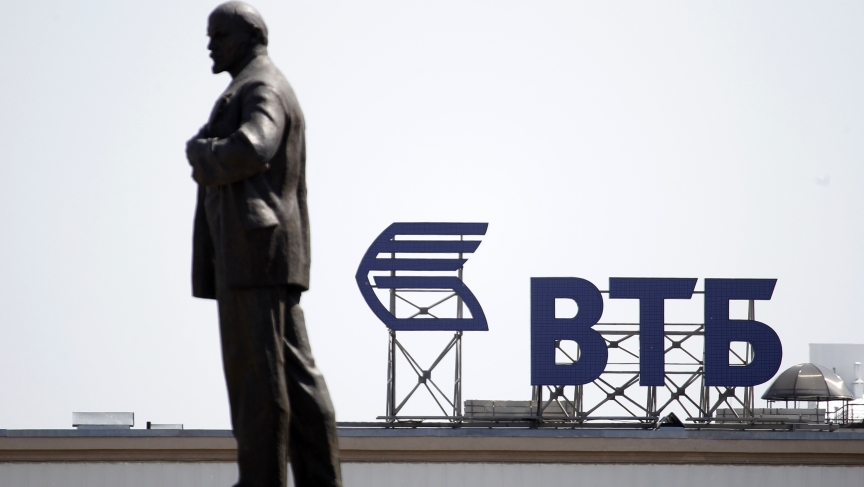 Russian-owned VTB Bank will be impacted by EU sanctions against Russia's economy. A monument of Soviet state founder Vladimir Lenin stands on the top of a building.
Credit:

The European Union is fed up with Moscow over the crisis in Ukraine. On Tuesday, the EU imposed broad new sanctions against Russia's financial, arms and energy sectors.

The sanctions aim to cut off Russia's access to European capital markets and restrict exports of military and technology goods. It's a much broader move against Russia than in the past; until now, the American and European sanctioned targeted individuals and companies rather than whole swaths of the Russian economy, says Matthew Dalton of the Wall Street Journal in Brussels. The US also joined the EU in levying similar sanctions on Tuesday.

The EU's 28 member countries have been cautious about taking a hard line against the Russian Federation. But Dalton says the downing of Malaysia Airlines flight 17 over eastern Ukraine — presumably at the hands of the pro-Russian separatists who control the area — forced the EU to act.

Before the crash, he says, "there was debate between the more hawkish countries — such as the United Kingdom — versus those countries more dovish and worried about the economic impact. However, what the crash did was it moved the entire debate closer to the hawkish side."

The most obvious former doves are the Dutch. After losing almost 200 citizens in the crash, the Dutch public demanded a get-tough policy with Russia — and those calls have seemingly worked. "[The Netherlands] went from being a very cautious player in this debate to being more hawkish," Dalton says. "That tipped the balance for the EU to proceed with imposing the economic sanctions against Russia."

And those sanctions could really hurt. "Russian financial institutions will not be able to borrow and raise equity on the European markets," Dalton says. "It could cause the ruble to devalue further and it could cause Russia to burn through some foreign currency reserves supporting the banks."

There is one gap in the sanctions: the EU declined to take harsh measures against Russia's state-owned oil and gas companies — Rosneft and Gazprom. Many EU members buy large quantities of natural gas from the Russians energy giants, and they're not yet ready to rock the boat so severely that their energy supplies are threatened.

But even so, Dalton says, don't expect Russia to sit idly by. "Expect Russia to retaliate against certain sectors of the European economy," he predicts. "If you're an American or Western company in Russia right now, you have a lot to worry about."