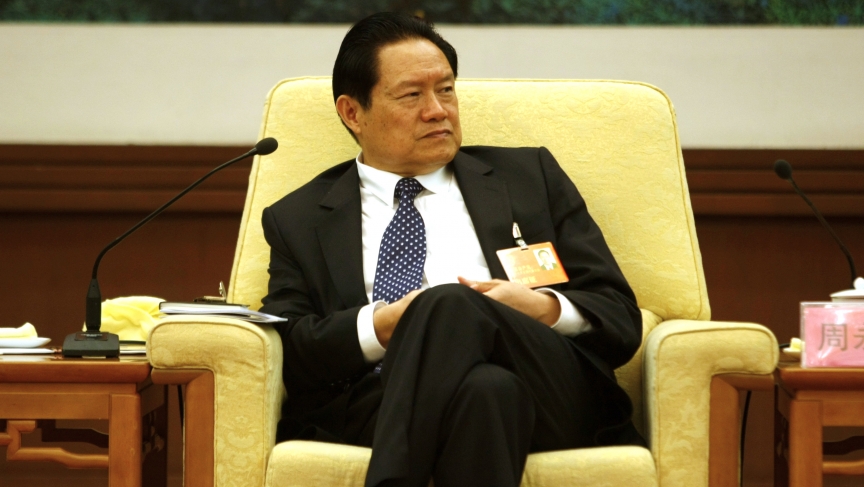 China's then-Public Security Minister Zhou Yongkang attends the 17th National Congress of the Communist Party of China at the Great Hall of the People, in Beijing in October 2007.
Credit:

China announced the capture of a "big tiger" on Tuesday. Not the species of large cat. But rather, the political variety.

Zhou Yongkang — China's former domestic security chief, former member of the Communist Party's inner circle, and until fairly recently one of the most powerful men in China — is being investigated “on suspicion of grave violations of discipline.”

In other words, Zhou is facing charges of corruption. The 71 year-old is the most prominent target in the government's wide-reaching current anti-corruption campaign, and he is also the highest-ranking party official investigated for graft going all the way back to the founding of the People's Republic in 1949.

Chinese President Xi Jinping has vowed to tackle corruption by going after both “tigers and flies,” in reference to party officials large and small.

“The downfall of a 'big tiger' like Zhou could have a deterrent effect on Party members and corrupt officials who believe they are immune,” China's state-run Xinhua news agency wrote.

Zhou's falling out with the government of President Xi has been an open secret since at least late 2013. Rumors swirled as Zhou disappeared from the public eye, while numerous associates and relatives of his reportedly came under government suspicion. But now it's official.

In a one-line announcement from China's anti-corruption agency, the title of "comrade" was dropped from Zhou's name, in a sign he might be purged from the party.

According to Reuters, Zhou was put under virtual house arrest last December as the investigation began. And by March, Chinese authorities had seized $14.5 billion in assets from people linked to Zhou.

Zhou Yongkang made a career for himself at China's state-owned oil industry. He climbed to the upper echelons of power within the Communist Party and became domestic security czar for the country, accumulating vast wealth and influence.

“The 'Dick Cheney' parallel is a very good one, in that it demonstrates just how important Zhou was in the Chinese system,” said Isaac Stone Fish the Asia editor at Foreign Policy magazine. “It hints at the massive amount of power that Zhou was able to accumulate behind the scenes.”

“He was officially ranked ninth, but he was believed to be the third most-powerful man in China, behind the president and prime minister,” Stone Fish said. The official announcement about Zhou is a sign that the government is feeling confident about its prosecution, Stone Fish added.

It is not entirely clear why Xi's government is going after Zhou, but Stone Fish said there are a couple of leading theories. “One is that Zhou supported Bo Xilai,” he said. Bo is another high-ranking party official who was purged in spectacular fashion in 2012.

Zhou reportedly cast the only Standing Committee vote in support of Bo, “So, this could be payback for that,” Stone Fish said.

Another theory is that Zhou was seen as exceedingly corrupt compared to other high-ranking officials, Stone Fish explained. And another possibility is that President Xi simply wanted to get away from policies associated with Zhou's tenure as the nation's security chief.

There will be no shortage of rumors about Zhou's prosecution, though, Stone Fish added.

But, “until either the Communist Party liberalizes, and opens up the archives, or until we get a really, really great leaker, I don't think we're going to find out exactly what's going on behind the closed doors of Zhongnanhai, the seat of the government in Beijing.”