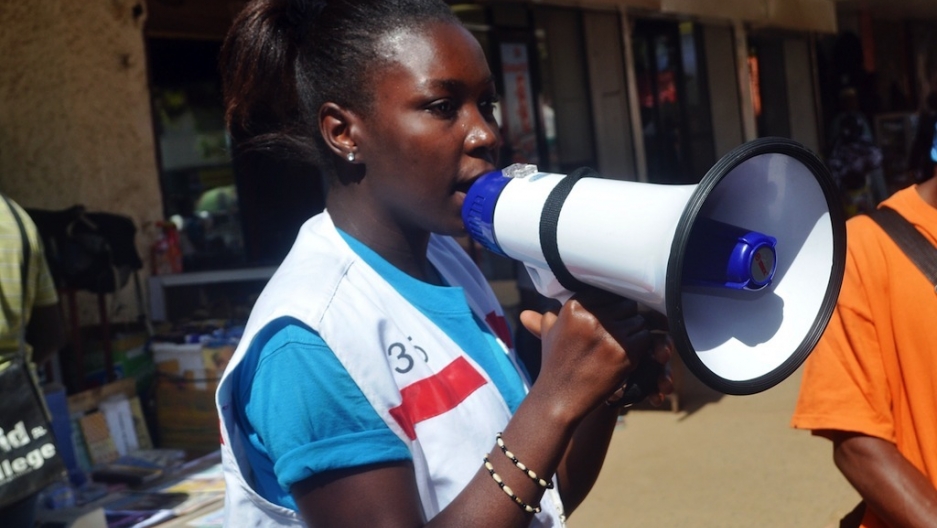 A member of the Guinean Red Cross uses a megaphone to give information concerning the Ebola virus during an awareness campaign on April 11, 2014 in Conakry. Guinea has been hit by the most severe strain of the virus, known as Zaire Ebola, which has had a fatality rate of up to 90 percent in past outbreaks, and for which there is no vaccine, cure or even specific treatment.
Credit: CELLOU BINANI
Share

Since the deadliest Ebola outbreak to date began in West Africa earlier this year, more than 670 people have died, according to the World Health Organization (WHO). Two Americans are among those who have been infected with the deadly infectious virus.

Ebola, which spreads through blood, sweat or other bodily fluids, can kill up to 90 percent of its victims. But aid workers say that in the countries hardest hit by Ebola — Sierra Leone, Guinea and Liberia — hostility toward Western medical treatment is pushing the outbreak to escalate dramatically.

“What is actually creating the greatest problem is the behavior of the population,” said Fabio Friscia, UN children's fund (UNICEF) coordinator for the Ebola awareness campaign in the three countries.

Many West Africans see Ebola as a “curse” rather than a medical illness, Friscia said. As a result, health workers have to fight to get Ebola patients to come forward for treatment — a challenge for controlling the disease in a region already struggling with scant medical resources.

“Medical personnel are being driven out in some of these places,” said Daniel Epstein, a spokesman for the WHO. “Some of these have become no-go areas.”

In Guinea and Liberia, locals have attacked disease isolation centers as well as doctors. On at least one occasion, aid workers from Medicins Sans Frontieres, or Doctors Without Borders (MSF), were forced to evacuate a health center in Guinea because of the threat of violent attacks.

“Health staff actually get [stones thrown at them] and it can become very violent,” Friscia said.

Even so, the response to the disease is not necessarily surprising to those on the ground. “It is absolutely something we could expect,” Friscia said. “The population is being attacked by an absolutely new disease no one [in Western Africa] has ever seen before.”

The relative newness of Ebola, coupled with its rapid death toll in recent months, has created an enabling environment for rumors and misinformation to spread among West Africans.

As many of the locals believe that Ebola is spiritual, there is widespread skepticism about Western-trained medical professionals. Many locals from these West African countries, for instance, fear that the doctors treating them will harvest the bodies of those dying from Ebola for organs, said Epstein.

Others believe that doctors are killing Ebola patients once they are taken to the hospital or that Ebola is a punishment for sexual promiscuity. This particular rumor, possibly due to a comparison between Ebola and HIV, has led to a strong stigma against Ebola survivors, said Friscia.

Meanwhile due to the high fatality rate of Ebola, many people don’t see the point of seeking medical treatment, according to Lisa Denney, a researcher with the UK think tank Overseas Development Institute. She and her colleague Richard Mallet recently traveled to Sierra Leone as part of their ongoing study on malnutrition, only to find the Ebola outbreak just starting around them. Through interactions with locals there, the researchers found that the stigma associated with Ebola – a community tends to shun those with the disease because of its highly contagious nature – is also a key factor in locals’ hesitancy to come forward.

The only way to counteract this distrust and increase collaboration is to work with traditional healers and religious leaders in the region, said Mallett.

Current efforts in Sierra Leone are concentrated on formal channels such as government-run clinics, he said. “Our research is suggesting that the government needs to engage with those more traditional, and less formal local actors.”

It is critical to ensure that all those who are shaping health care prevention and treatment — whether the local chief or the community health worker –—deliver the same message, the researchers said. The government’s outreach “needs to be a broader approach where you capture all those people who are influencing people’s behavior,” Denney said.

Local traditional funeral customs also present a challenge to containing Ebola, as many involve washing and cleaning the dead before burial and traveling far to be with family.

“The cultural practices are very strong,” Mallett said. “It is very hard to convince them to give up something that has been in their family for generations.”

UNICEF has turned to broadcasting radio programs with local leaders and Ebola survivors to spread awareness about the virus and how to prevent its transmission. MSF recently produced an explanatory video about what happens in the health centers and isolation wards to reduce fear of the unknown.

Various groups are also working together to organize a concerted grassroots campaign to ease concerns. Around 150 aid workers from Red Cross, MSF and different UN wings have fanned out across the region to help counteract the outbreak. Workers from the International Committee of the Red Cross also have been asked to address locals at the central squares of different villages.

Each of these international organizations are working in close conjunction with each other.

“We are trying to have a more dialogical communication than a top-down approach,” said UNICEF's Friscia.

But this collective effort, while important, still falls short of what is needed to counter resistance to Western medicine in West Africa – and ultimately, to stop the spread of Ebola.

“We’re far from being funded,” said Friscia. “The faster we react, the cheaper it’s going to be.”

Muslims make up more than 70 percent of the population in Sierra Leone and Guinea. With the end of Ramadan approaching, many members of the international health community fear that the disease will spread further due to large-scale movement of families visiting each other.

“There’s still a long way to go,” said Epstein. “We are expecting this disease to go on for several more months.”

More from GlobalPost: Your guide to the West African Ebola outbreak