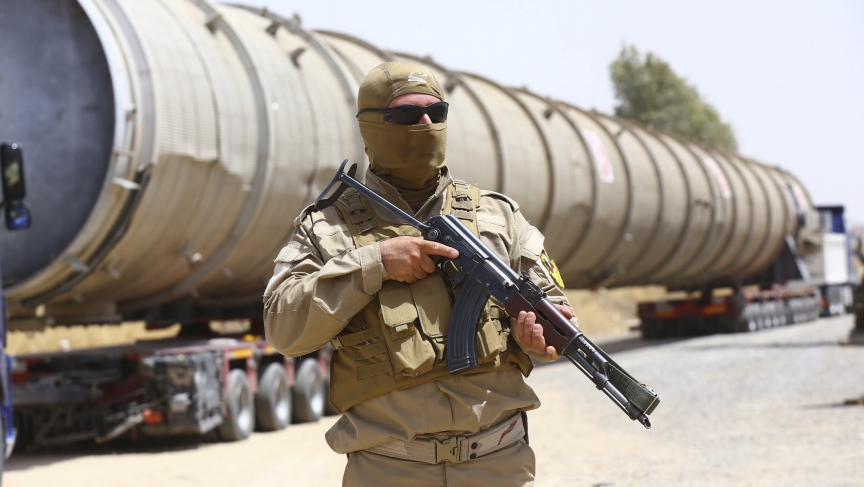 A member of the Kurdish security forces takes up position with his weapon as he guards a section of an oil refinery.
Credit:

The border between Iraq and Iran is a dramatic landscape of cedars and parched grass. It looks and feels very isolated — but these days it's a bustling commercial route.

Dozens of Iranian tankers are making their way down a valley into Iraq. In a few hours they'll be hitting gas stations across the Kurdish region of northern Iraq.

"You see that vehicle out there with Iran plate on it? It just got here from Iran, just few minutes ago," says Umid Hameed, who owns a gas station in Kirkuk. Militants from the Islamic State of Iraq and Syria swept into northern Iraq last month, taking over huge chunks of the country and cutting off oil supplies. Since then, he's had to sell Iranian gas instead — at triple the price.

"If you'd [been] here like three days ago, you'd see lots of drivers lined up, arguing and trying to get petrol," he says. "But now you see no one out there. ... It's very expensive. Many people just decide not to buy."

But even with the long lines and increased cost for gas, the ISIS offensive has been relatively good for Kurds. When the Iraqi state and army panicked and fled in the face of ISIS' advance, Kurdish forces moved in and Kurdish politicians took the chance to assert more political authority and seemingly make moves toward full independence. And in the oil sector, Kurds are moving in as well.

The peshmerga, Kurdistan's armed forces, have expanded their area of control into cities like oil-rich Kirkuk. In mid-July, they seized two key facilities outside the city. And along with soldiers came new staff to help run the oil facilities. Most of the former workers at oil stations were Arabs; most of the new ones are Kurds.

For decades, Kurds weren't even allowed to work in the oil industry. But "Alwan," a Kudish oil engineer who declined to give his real name, says that Kurds taking over the jobs isn't payback. "You know, as a Kurdish [person], we consider it as part of Kurdistan," he says. "Everything goes back to its ordinary place. ... I'm pleased with this."

Alwan says his Arab colleagues were given the choice to stay or to leave. But with tensions running high between both communities, most Arabs feel like they're being forced out. Few of them have shown up for work since.

Baghdad called the move a takeover, and Iraqi government officials accused Kurds of capitalizing on the chaos. But Lt. Col. Ahmed Aziz, the commander of the local Iraqi Army battaltion, says that's not what happened. He says the peshmerga moved in because he personally asked them to protect the oil fields after his requests to Baghdad for help went unanswered.

"As you all know, this is a disputed area, there's a level of threat around here," he says. ISIS fighters are just 12 miles away. "I've been reporting to Baghdad, telling them about my needs here for the battalion in the area. No one listened to me. And no one cared and we didn't get any extra recruits. Now as a battalion commander in charge of the security of the oil facilities in this area, I have the right to request help from whoever is available."

For now, while Alwan and other Kurds are happy, Kurdish control the of the refineries isn't helping at gas stations. Refineries in Iraqi Kurdistan can only process about a third of the crude oil extracted every day, so Kurdish authorities are left with a huge surplus that they want to export. That would finance puchases of Iranian gasoline and drive prices down at the pump.

Alwan says it's a shame, though, that Kurds have to resort to imports in such an oil-rich region. "Let me tell you something: We have a super giant oilfield and that's incredible, unbelievable to bring oil from Iran! Don't you agree?" Alwan asks. "Yet, this will probably go on for months until Kurds build new refineries."

He says that could take up to two years — only then will Kurdish authorities cash in on the oilfields. But for now, the political dividends are more than welcome.