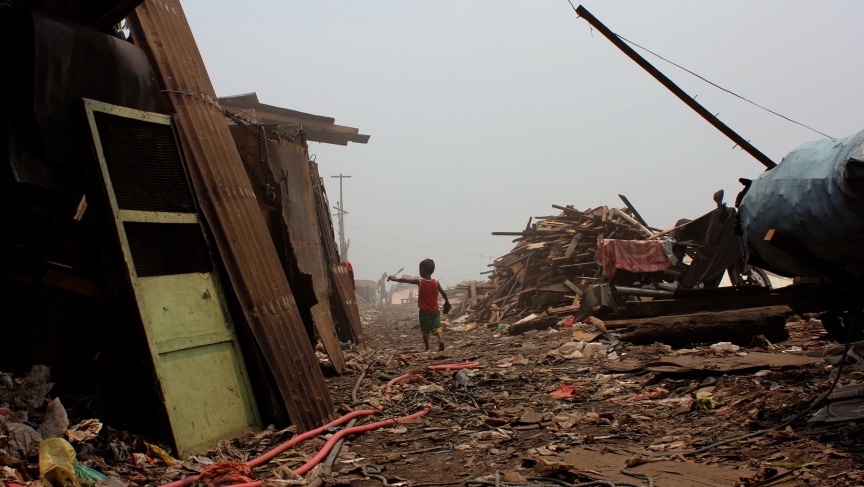 In Tondo, a Manila slum, poor families live and work in the charcoal fields, where rent is free.
Credit:

The slums of Tondo are the most notorious in Manila, and Ana Lisa Loste lives in the most destitute district.

Her house is down a long road, permanently muddy from the black goo that drips out of garbage trucks, past the part of the slum where scavengers sort through glass bottles, right where the smell of rotting trash meets the stinging smoke from a field of crude charcoal kilns.

Out here, the ground is hot from the burning kilns, and everyone breathes shallow to keep from coughing. Children play basketball or run around barefoot. Others are working, sorting trash, banging nails out of scrap wood to resell at junk shops, or packing charcoal into large plastic sacks.

The Philippines has one of the highest birth rates in Asia, and most of the population growth has been in the poorest families who can least afford birth control — or children. In Tondo, people are painfully aware of the irony in this. Around here, it’s not unusual for a woman to have eight or ten children.

But that may soon change. For 16 years, the Catholic Church, which remains extremely influential in this heavily Catholic country, blocked passage of a Reproductive Health bill. But this year, the Philippine Supreme Court declared the bill constitutional. The Department of Health will now be allowed to distribute free condoms and other forms of birth control, as well as provide reproductive health services and sex education to millions of Filipinos who would otherwise struggle to afford it.

Ana Lisa Loste’s family is among the many who stand to benefit from the legislation.

Loste is 33 years old; she has five children, and two grandchildren, one of whom was born just a few days ago. He sleeps on the floor of the family’s tiny, one-room shack, while Loste’s one-year-old daughter fusses on her lap.

By the time she was 20, Loste already had three kids. She says none of them was planned: “I never wanted to have so many children.”

She gave up her job as a municipal street sweeper, a job she still remembers wistfully, to raise her children. Her husband scavenges trash for a living, and she says whatever money he makes goes straight to feeding their family.

“We’ll cook if there’s something to cook. But if there isn’t, then we just go to sleep,” Loste says.

Most of her days are consumed by the need to feed them and find a way to send them to school, a luxury that her parents couldn’t afford for her.

As we speak, three little girls, their skin blackened by soot, haul sacks of charcoal up and down the narrow pathways of the slum.

To Loste, the scene is familiar. She grew up as one of a dozen kids, living on a smoldering trash dump called Smokey Mountain. When she was in second grade, her parents pulled her out of school so she could start scavenging to earn her keep.

“The thing that I really wanted was that my kids wouldn’t have to experience what I did when I was little. I don’t want to make them touch garbage like I did,” Loste says.

She’s proud that the family is managing to scrape by without having to put the children to work. She says, despite his humble job, her husband is a hard worker. And until recently, they’d managed to go ten years without having another child, a result of natural family planning, birth control when they could afford it, and luck.

Then, Loste’s eldest daughter, Elisa, got pregnant at 16. The baby died of heart failure. But when Elisa got pregnant again, Loste says she was disappointed and worried. She insists, though, that it’s not too late for Elisa.

“I told her don’t get pregnant again because if you keep having more kids, you’re going to end up sacrificing yourself. Just use contraception for now.”

For Loste, having fewer kids is the path to making the lives of poor families better.

She blames government corruption for keeping people in the Philippines in poverty. But she also blames the Catholic Church, which fought — and preached — against the Reproductive Health Bill for years, and kept birth control out of reach for people like her.

“I’m sure it would have been a big help, if I knew about it when I first started having children. I’m sure I would have used it, and my children would not have come one right after another,” Loste says.

“I could have spaced them out, but in my time it was forbidden. If you could buy it you had to keep it hidden,” she adds.

Like most Filipinos, Loste is a practicing Catholic. When she was young, birth control was so vilified by the Church that it was difficult to find. But public opinion in the Philippines has changed a lot in the past decade. Loste is now willing to ignore the teachings of the Church, because of what she now sees as the consequences of its opposition to free birth control.

Loste hopes that her daughter, Elisa, follows her advice to use contraception, and make something of her life. She hopes that her own youngest daughter, who’s still just a year old, might grow up to be a nurse someday.

And one day, when Loste has fewer mouths to feed, she hopes that she can save up some money and maybe open up a little shop, just like she’s always dreamed.