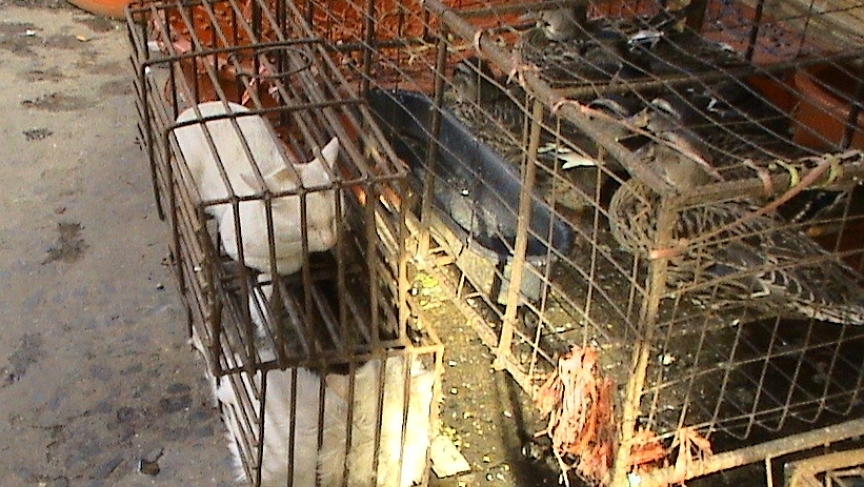 Live cats are stored next to live ducks at a market in an unidentified east Asian market in 2009. The market for cat meat in east Asia has exploded recently.
Credit:

Vietnam is becoming an international gathering place for cats, for all the wrong reasons.

Cats are being smuggled into the country from as far away as Thailand to meet demand for cat meat in Hanoi restaurants. Vietnam is trying to crack down on restaurants that cook cats, but the Agence France-Presse service reports the practice is still widespread. It's common enough that cat owners keep their pets leashed up and out of view, lest enterprising meat vendors snap up their cats and charge restaurateurs more than $50 for the "little tigers."

Cat consumption may have started as a survival tactic during the lean times of the Vietnam War, but AFP talked to one man who said that cat meat is "more sweet, more tender than eating a dog." Dog meat has long been popular in Vietnam.

Germany taps into a boom in immigrants looking to settle there

In the United States, migrants are getting a harsh welcome from protesters as they come across the border. In Germany, they're getting language lessons and speedy paperwork. The Washington Post shows how Germany has become a land of opportunity for immigrants that's second only to the US — literally, if you look at the numbers.

The German government has smoothed bureaucratic hurdles to entering their country, and Europeans fleeing high unemployment and low economic growth across the continent are now coming to Germany to find work. It's not just for their benefit: Germans have a negative-growth birth rate, so the influx of new workers is helping keep the workforce stocked and the country on the right demographic track. And, if the World Cup is any indication, some immigrant talent won't hurt on the soccer field, either.

Filipinos look to contraceptives as a way out of poverty

Lawmakers in the Philippines have been debating for years whether to make contraception widely and cheaply available to all. Their primary opposition has been from the Catholic Church, which still holds strong sway in the deeply Catholic country. But a recent breakthrough changes that, making contraception free to anyone who wants it, while also promoting sex education.

Now, the country's poor are looking to contraception as something of a salvation — a way to have a say over when to have children, and how many to have. PRI's The World traveled to one Filipino slum and met a 33-year-old grandmother who hopes contraceptives will give her daughter a chance for a better life. The photos of children working and scavenging to support themselves that accompany the story are stunning.

Monday was the first day of Eid al-Fitr, the holiday that marks the end of Ramadan, for many of the world's Muslims, and most of the rest begin celebrating on Tuesday. But if you're Muslim and in the MIddle East, you may in trouble if you just started your candy shopping. It's traditional for Muslims to give each other "sweets" to mark the end of the fasting month of Ramadan.

Saudi Arabia's candy sellers have jacked up their prices by 60 percent for the holiday, leading shoppers to complain to the Saudi Gazette. One man said that the price hike is robbing poorer Saudis of the chance to celebrate Eid with traditional sweets. But the price tags don't seem to have hurt business so far: the Gazette also talked to one street vendor who says his sales are up 80 percent.

Mick Ebeling first heard about Daniel in the news. At the time, Daniel was a 14-year-old boy living in Sudan, where the country's wars had cost him his hands. Daniel was worried he was becoming nothing more than a burder to his parents, because he could not work or make a living. And he wasn't the only one feeling like that.

So Ebeling decided to do something for Daniel, and for as many of the Sudanese amputees as he could. He packed up and headed to Sudan with a dream: to make artificial limbs using a 3-D printer, cutting the price from as much as $15,000 each to a mere $100. And he's succeeded. Ebeling talked to CBC's Q with Jian Ghomeshi about the project.

A potential tropical storm — what would be the second of the season — is brewing in the Atlantic Ocean, off the Cape Verde islands, near Africa. The tropical wave formed over the weekend and has been organizing ever since. If it holds together, and there are indications it will, it could become a named Tropical Storm, Bertha, by Wednesday, according to AccuWeather.