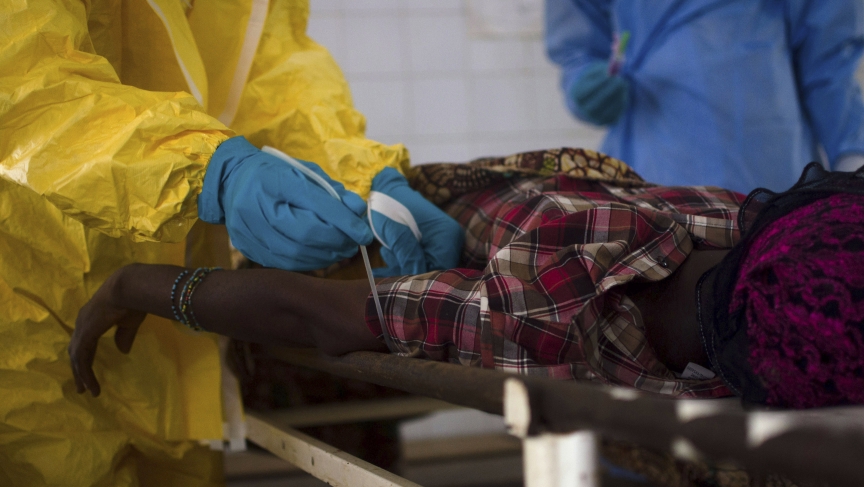 Medical staff take a blood sample from a suspected Ebola patient at the government hospital in Kenema, July 10, 2014.
Credit:

More than 660 people have died from the virus since this most recent outbreak began in March in West Africa. It's affecting people in Guinea, Sierra Leone, Liberia and now Nigeria.

Over the weekend, the death of a Liberian man in the Nigerian city of Lagos put Nigerians on alert.

“People think that Ebola is a disease that quickly burns out and is incredibly devastating, but in fact it has an incubation period of 21 days,” explained Dr. William Fischer at the University of North Carolina.

Fischer recently returned from treating Ebola patients in Guinea with the World Health Organization. He's not surprised that the infected Liberian man was able to travel to Nigeria without detection, as many of the symptoms associated with the virus are nonspecific, such as fever, diarrehea and vomiting.

“You can have a virus and it [can] be incubating in your body for 21 days. It’s not difficult to be able to get on a plane in one place and end up in another place,” Fischer added.

Stopping the outbreak from spreading has been complicated for several reasons. One big factor is suspicion of NGO workers and foreign doctors by the people living in affected villages. There have been reports that some people in Guinea have barred doctors and NGOs from even entering their villages.

“From the beginning, there’s been incredible mistrust and, to be honest, I can’t blame the mistrust," he said. "These treatment facilities are doing all the right things to try to help patients ou,t but the reality is that upwards of nine out ten people who come for treatment end up in a body bag. So I can understand the incredible mistrust that exists between the affected communities and the healthcare workers."

Healthcare workers themselves also endure great risks in helping with treatment. Two Americans treating Ebola-infected patients in Liberia tested positive for the virus over the weekend, and a high-profile Liberian doctor has reportedly died of the disease.

Fischer has thought a lot about the risks of going back to Guinea, still, he says he is determined to return.

“It’s tough, though, to tell your family, especially after recent healthcare workers have become infected themselves. There’s an inherent tension there, in that it’s tough to convince them that this is the right thing for me — but I feel it’s the right thing to do,” Fischer said.