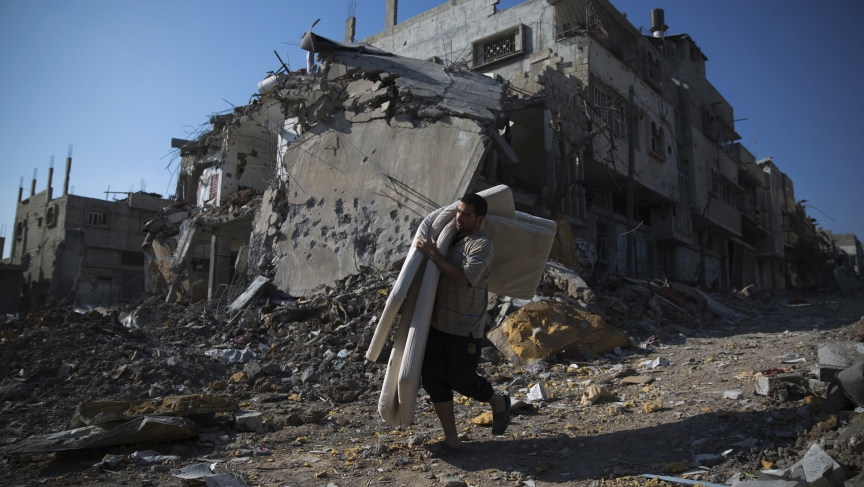 A Palestinian man salvages belongings from damaged buildings in Gaza City's Shejaia neighborhood, which witnesses said was heavily hit by Israeli shelling and air strikes during an Israeli offensive.
Credit:

In Gaza, fighting continues despite pleas from the international community urging both sides to halt the violence.

"In the name of humanity, the violence must stop," UN Secretary-General Ban Ki-Moon said on Monday. And for a few hours, it actually did.

A 12-hour ceasefire on Saturday gave William Booth, a foreign correspondent with the Washington Post, a chance to get into the hardest hit areas of Gaza to assess the damage. What he found was widespread devastation.

"What was shocking to us — and to the people of Gaza who walked back into these neighborhoods, who had been gone a couple of days — was the scale and the extent," Booth says. "It was not just a house here or a house there as we'd seen earlier, but it was just, like, a whole block shot up."

He took along his iPhone and recorded the scenes of destruction:

He says reporters and residents moved through the area quickly. They all knew the ceasefire was temporary and could have ended without warning.

Gazans took whatever items they could from their homes, from bags of rice to television sets. The streets, Booth remembers, were quiet. "I was surprised by the silence," he says. It was partially because of the lack of cars, which couldn't drive through the rubble. But there was also no one wailing or yelling or shouting about the Israelis. "People are moving fast," Booth says. "People aren't gathering or having conversations on the street or taking moments to do things."

At the start of the now three-week-long campaign, Booth says Israel carried out surgical airstrikes. "The target of the Israeli strike would be like some guy sitting on a couch in a corner room on the second story, and they'd hit that couch on the second story of that apartment," Booth says.

Now he thinks that has changed. "In the last days there, Israelis changed their rules of engagement," Booth says. Walking through the streets, "you turn the corner and you're just gobsmacked by some scence of destruction. ... It's not just a small family house down, it's a big apartment block down or a big crater."