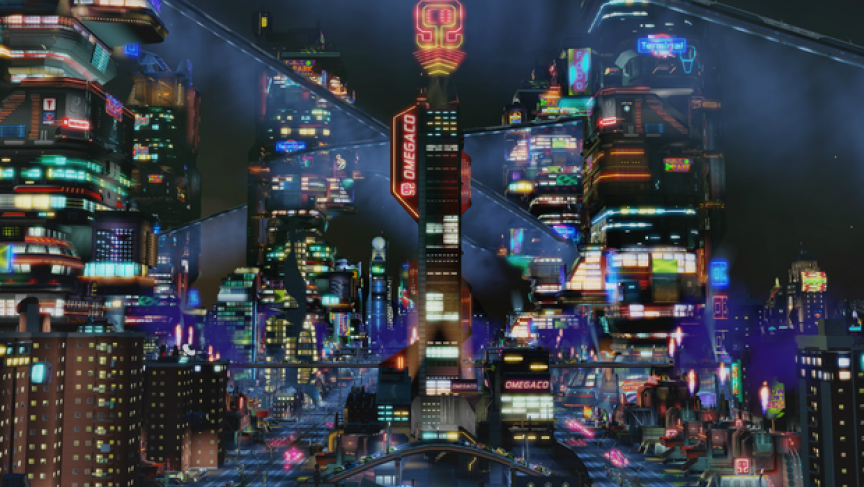 A still from SimCity: Cities of Tomorrow featuring OmegaCorp, a dystopic megacorporation in the game.
Credit:

The newest version of the popular video game SimCity has taken a sci-fi turn.

In the game, you play a mayor-slash-urban designer who has to choose between two different versions of an urban future: you can anchor your city around a private company called OmegaCo, which cranks out cheap products and pollutes the environment; or you can build your city around The Academy, a hub of green innovation — or you can mix and match.

“I think green tech is something that’s hot right now,” says Jason Haber, one of the designers of SimCity: Cities of Tomorrow. “So it’s really easy to see where it could go. It was interesting because the dystopian future was actually more difficult to craft for us, to figure out what it would look like. Nobody’s striving to be, like, ‘I’m going to be the most dystopian technology that’s ever been created.’”

But guess which version of an urban future has been more popular with gamers?

“I thought that more people would go after the green, clean technology first, but most people actually go after the OmegaCo dystopian future first,” says Haber. OmegaCo may sound “Dr. Evil-ish,” but they’re the kind of necessary evil we live with and accommodate all the time in real life.

“All of a sudden, you’re, like, ‘Whoa, I have to have OmegaCo in my city or it will fall apart,’” Haber says.

No video game franchise has lasted as long as SimCity — it's been a quarter of a century since the first version. It’s unusual in other ways too: it’s not about shooting bad guys, or blowing stuff up, or even competing. You create a city from scratch, populated by simulated people — the Sims.

“I look at technology ... and I look at the drought that’s happening in California right now, and [I see] that it’s going to become more commonplace. At some point in the future, it’s going to be accepted that we sanitize sewage [to] have more drinking water.”

The game also has a maglev train reminiscent of the Hyperloop that Elon Musk of Tesla Motors has been developing, and a system of drones that players can send out to fly over the roads to reduce traffic. When residents want to go shopping, they just send out a drone, direct it to a commercial building, pick up the goods and bring them back.

“About a month after we launched the game, Amazon announced Prime Air, their drone system that’s going to do exactly that,” Haber adds.

“I can look out the window when I’m flying in a plane and everywhere I look, I see SimCity,” Haber continues. “I see these [new] buildings and I’m like, ‘Oh, that reminds me of our game.’ And I know, when I have those moments, that we’re doing something right.”